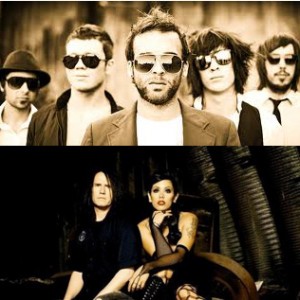 In the first segment I speak with Ben Union and artist from “The 253” Saturday night, January 28th at Louie G’s in Fife, Ben and his band will celebrate the release of their brand new record, This Blessed Union Volume I. On the bill that night will be Seattle band and past SMI Radio guests, Hot Bodies In Motion as well San Diego’s The Silent Comedy.

We talk about the making of the new record, his approach to making music and performing and Northwest music community as a whole. Also in the first segment I speak with music establishment owner Louie G. about his philosophy about bands and his approach to running one of the most fan and band friendly music and eating establishments in the South Sound. In addition, I will feature selections from the band’s newest effort.

In the second half of the show, I feature the music of  Vancouver Canada’s own industrial, pop rock outfit, Jakalope.  I speak with the group’s co-writer and lead vocalist, Chrystal Leigh. The band is currently on a short west coast tour and will also played Saturday, January 28th at El Corazon in Seattle.

We talk about Jakalope’s music, her influences and the haunting video below. Check it out…

Not only is he a multi-media journalist, he is also an accomplished musician. He is the founder of SMI and drives the creative look, feel and branding for the publication. His years of writing, arranging, and performing live music in a variety of genres inform his ability to communicate the message and the mechanics of music. Roth’s work on SMI reflects his philosophy that music is the universal language, and builds community. He believes it has the power to unite people of every race, religion, gender, and persuasion.
Related ItemsBen UnionEl CorazonJackalopeLouie G'sNWCZ RadioSeattle Wave RadioSMI RadioSRrocks.com
← Previous Story SMI Radio Ep. 47 On Demand: Joe Simpson AKA ‘Eldridge Gravy’ / Theophilus London
Next Story → SMI Radio Ep. 49 On Demand: former Prince keyboardist “Doctor Fink”