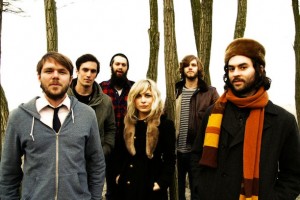 Seattle’s The Head and the Heart – Photo: theheadandtheheart.com

Fresh from winning five Grammies and a stellar TV performance, Foo Fighters are performing a fundraiser  for President Obama in Los Angeles on Wednesday.

Thursday in San Francisco, the president’s supporters will hear a performance by Soundgarden’s frontman, Chris Cornell.

And on Friday, Seattle indie buzz band The Head and the Heart will perform at a fundraiser in Bellevue.

President Obama is holding eight fundraisers during a three-day trip to Wisconsin, California and Washington state to benefit the Obama Victory Fund, a joint fundraising account for the president’s re-election campaign and the Democratic National Committee.

Not only is he a multi-media journalist, he is also an accomplished musician. He is the founder of SMI and drives the creative look, feel and branding for the publication. His years of writing, arranging, and performing live music in a variety of genres inform his ability to communicate the message and the mechanics of music. Roth’s work on SMI reflects his philosophy that music is the universal language, and builds community. He believes it has the power to unite people of every race, religion, gender, and persuasion.
Related ItemsChris CornellKEXPNewsSeattle Music HappeningsSoundgardenThe Foo FightersThe Head and The Heart
← Previous Story Fake Label Records Presents: PCNW Music Compilation
Next Story → SMI Radio Ep. 51 On Demand: Seattle soul sensation Allen Stone / Sean Hensley & Gabe Mira (Setlist Music Solutions)