Home / Artist Spotlight / Sounds Major: My on and off relationship with Harvey Danger

Sounds Major: My on and off relationship with Harvey Danger 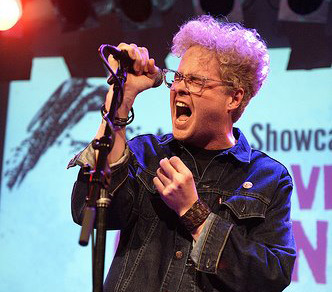 Like many teenagers in 1998 I was introduced to Harvey Danger through their radio hit “Flagpole Sitta”. I immediately talked my dad into buying me “Where have all the merrymakers gone?”  Of course I became enamored with other great songs from this album such as “Wooly Muffler”, “Carlotta Valdez” and “Jack the Lion” which to this day still gets me choked up.

After getting to know the album front to back I desperately wanted to see my favorite songs performed live. Luckily for me, my dad decided to start a tradition of father-son concert going that summer so I got the chance to see HD at Endfest 7. I remember being slightly taken aback by front man Sean Nelson’s anti-rock star appearance and stage mannerisms. His famously curly mop whipped about as he and the band jolted through their 35 minute set. Once the band left the stage I turned and made haste to the merchandise booths where they would be heading to sign autographs. I got my CD signed by the whole band and snagged a promotional poster for the album that hung on my wall until I moved out to my first apartment.

Because I grew up in an isolated mountain town called Roslyn, located 80 miles east of Seattle, my finger was far from the pulse of not only the local but also the national music scene (other than country and oldies). With no MTV, no rock radio stations and no Internet I was at the mercy of my friends’ older siblings as far as new music discovery was concerned. By age 16 I was convinced that 80’s punk and 90’s heavy metal were the only genres worth listening to. So you can imagine that I did not do too much more listening to Harvey Danger.

Fast-forward to Green River Community College. The year was 2004 and luckily I had passed my punk/metal elitist phase. Enter Amy G. I was a TA for her intro to psychology class and she pretended to be confused in order come to get my attention at the study sessions. We hit it off and, unprofessionally I might add, we started dating. It was during this time that I was re-introduced to Harvey Danger through their 3rd full-length album “Little by Little…”

“Little Round Mirrors”, “Cream and Bastards”, “Happiness Writes White” and last, but most certainly not least, “Wine, Women and Song” all had me right back in the HD fan club. Amy and I spent many car trips to our favorite hiking destinations listening to these tracks and our last date was a Harvey Danger concert so unsurprisingly, when our courtship came to an end, so did my ability to listen to these songs without thinking of good times lost.

Of course I got over it (Amy and I remain friends for those who are concerned) and a few years later while digging through an old external hard-drive I saw a folder titled “Harvey Danger”. I loaded the 2 albums I had on to my mp3 player and rekindled the long-lost friendship. I immediately asked myself the question that I still kick myself for not asking a few years earlier: do they have an album between Merrymakers and Little? That is when I discovered “King James Version”, possibly my favorite of their 3 studio albums. “Meetings With Remarkable Men (Show Me the Hero)”, and “Pike St./Park Slope” would be my two favorites if I had to choose. The latter is yet another HD tune that chokes me up.

This brings us to the present. For the last few weeks I have been listening to Harvey Danger and I have found that even though I am not tiring of their three albums, I am most certainly thirsty for more. So I began looking online for any info on the whereabouts and creative endeavors of Sean Nelson, as it was his voice and lyrics that had captivated me the most. Google gave me nothing but a link to the Harvey Danger Wikipedia page and links to his articles written for The Stranger. This was a start but I couldn’t find anything about new music. I then found him on twitter and began investigating his feed. Alas! This tweet was what I had been looking for:

A Google search of “sounds major band” led to a cryptic website with a blurry photo of a man signing into a microphone backdrop and a small text box in the upper left-hand corner reading “sounds major is a band from Seattle. They are playing Fri Jan 6 at the Crocodile cafe with Catalo. You should go. There will be more to come soon. (“PS. know any web designers?)”

I was a bit bummed as I had found out about this on January 23rd but I continued my investigation. The fourth result of my Google search led me to the Sounds Major Bandcamp profile. Here was a small bio and 3 demos. The bio explained that Sounds Major is made up of Sean Nelson and Kyle O’Quin (currently of Kay Kay and His Weathered Underground  & Wild Orchid Children, formerly of Gatsby’s American Dream). The two began writing together in the summer of 2011 and they invited Kyle’s band mates Thomas Hunter and Aaron Benson to play bass and drums on their 3 demo recordings “Advance and Retreat”, “Shark” and “All-time Low”.

No info on upcoming shows or release date of a full-length album was provided but the demos were powerful enough to convince me that these guys weren’t playing games. Each track is tagged with a small descriptive quip. “All-time Low” is explained to be a “demo recording of a song about looking on the sunny side of the slough of despond”. This tune is classic Sean Nelson intellectual flamboyancy with some tongue in cheek humor, not to mention extremely catchy and accessible. “Shark” a “demo recording of a spritely number about romantic agony and the danger of metaphors gone haywire”, showcases Nelson’s lyrical idiosyncrasies as well as his ever-impressive vocal prowess. And finally “Advance and Retreat”, the first tune Sean and Kyle wrote together, is a bittersweet sounding tune laden with abrasively funny lyrical content.

After getting to know the demos I became eager to check out some O’Quin’s other work, as this was the first I had heard of him. I listened to a few tunes from Kay Kay and His Weathered Underground and was blown away. I could write an entire article on my first Kay Kay experience but I will stick to the task at hand, just be sure to go check them out.

So my detective work has paid off. Not only have I discovered that one of my favorite artists is still creating great music, but I also have been introduced to yet another talented songwriter from Seattle. After getting to know O’Quin a bit better I am very excited to see what these two are capable of as a collaborative force. And while it is undeniable that there are hints of both Harvey Danger and Kay Kay in their overall sound, Sounds Major is most certainly its own unique entity.

Not only is he a multi-media journalist, he is also an accomplished musician. He is the founder of SMI and drives the creative look, feel and branding for the publication. His years of writing, arranging, and performing live music in a variety of genres inform his ability to communicate the message and the mechanics of music. Roth’s work on SMI reflects his philosophy that music is the universal language, and builds community. He believes it has the power to unite people of every race, religion, gender, and persuasion.
Related ItemsHarvey DangerSean NelsonSeattle Music HappeningsSounds Majortimmy held
← Previous Story Live Review: Sonic Safari and Dolly Rotten Duo step out of the shadows
Next Story → SMI visits Twin Cities to see The Revolution