If Seattle is known for anything, it’s the many forms of artistic expression, ranging from painting to photography to music and writing. Over the years of building this reputation, the city has shown its support and appreciation through artist scholarships, grants, and dedicated venues to help up-and-coming artists develop connections and practice what they love. One of the more popular ways to share and experience different artistic crafts, music in particular, is open mic night.  ALthough there are plenty to choose from,  a few stand out week after week. 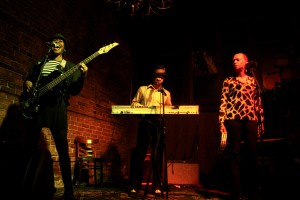 The best open mic venue for Sunday night, and probably the entire week, is the Conor Byrne Pub. This Ballard gem has produced quality entertainment on a weekly basis for the last six years and the standards for musicians just keep rising. The stage is big enough to host entire bands – and a stationary piano – and has great mood lighting, created by a few par cans and a beautiful chandelier. Dan Yost has been the official host and sound engineer for the Sunday treat since 2009. To keep things interesting and help out fellow musicians, Yost features a new host every week, each coming from a different background; some just coming out of their shell, some established comedians, and some just great musicians checking out their competition. This is the only open mic venue that’s been said to be too generous with applause and support, which can be inspiring – or a little crippling in the constructive criticism part of it all. Like most open mics, there’s a variety of music coming through and an abundance of excited performers waiting for their chance to play at the Conor Byrne. According to Yost, every show “ebbs and flows like a good open mic” with lots of feedback and even some audience participation. Signup is always at 7:30 p.m. and the list fills up within minutes, which can be hard on the newcomers who haven’t figured out the game yet. The show starts at 8:30 p.m. and goes until everyone on the list gets a shot to impress the crowd. Since the venue has a full bar, it’s 21 and up only. If you want to try out your spoken word or stand-up – you’ll have to take it somewhere else.  The Conor Byrne is exclusively for musical performances.

The Seamonster Lounge in Wallingford is the best open mic to hit up on a Monday night. This venue is definitely a lounge, complete with couches and mood lighting. Colorful sea-themed art decorates the walls surrounding the stage area, which is just big enough to host a variety of talents. Kent Halvorsen has been one of the open mic hosts and sound technicians for the last two years and was surprised to find himself enjoying it so much. A variety of genres are represented, including ukuleles, rock, blues, funk, and one-man bands that will impress even the harshest critics. Seamonster welcomes all types of performances, including spoken word, but it can be challenging to get a decent response from the crowd, according to Halvorsen. This comfy venue gets packed quickly, the friendly atmosphere usually allows for a seat, and it’s guaranteed to be within earshot.  Guest appearances are common, providing great entertainment from artists like Jim Page, but can also make it difficult to stay on schedule. Overall, this is a great venue to try out new material and gather some legitimate crowd input for musicians. Signup is at 9 p.m. with the show starting a little before 10, providing plenty of time to enjoy a drink from the fully stocked bar or to grab some food off the $5 menu. 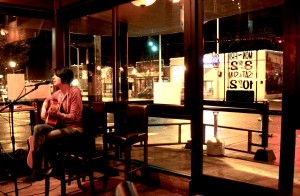 Tuesday’s open mic winner is the Starlight Songwriters Night at Shadowland in West Seattle. Patrick Smail, songwriter and host of three and a half years, said that while the emphasis for performers is on original music, there are no set rules, and he’s seen everything from jugglers, to stand up, and hip hop. The venue has one of the best sound systems in the area and plenty of room to sit and enjoy great food and a variety of drinks. One of the benefits to the West Seattle location is the development of great connections that comes from a strong sense of community. Smail said that not only has the venue established regulars who come back for repeated shows, but it has played a hand in a few new band formations, which led to some great projects. He encourages musicians to advertise for upcoming shows and promote their music in whatever form it comes in. Smail tells us the audience response is usually good, and the regulars in the crowd set the mood for the newcomers, and that a proper response can change the artist’s entire demeanor while on stage. To  encourage performers to come up with new material and try harder, Smail hosts a “Best of Tuesdays” on the last Saturday of every month, featuring musicians who entertained the crowd the most. Signup is 9 p.m. and music starts at about 10. 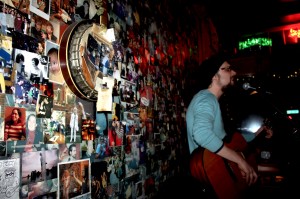 The choice for best Wednesday open mic venue is the Hopvine Pub, on Capitol Hill. This cozy bar is always full of supportive listeners and talented performers, who are consistently trying out new styles, new material and growing their confidence as musicians. The open mic has been around for about 15 years, and has definitely established a certain level of expectation, from both artists and the audience. Eric Miller, a songwriter himself, is the current host.  He also runs sound to the dimly lit, intimate stage, decorated with a collage of past musicians.  According to Miller, Wednesday nights are usually a full house and the caliber of performers is always good, which drives artists to produce better songs and attract even more talented guests. It’s rare to see a boring performance here, but when it does happen, the crowd is still respectful and at worst will ignore the act, Miller said. In his five months of working at the venue, Miller has experienced an array of genres, from folk to alternative rock to string ensembles to covers with a spin. The Hopvine has a great menu selection including pizza, sandwiches, salads, soups and appetizers and also serves beer and wine, which places an age restriction for everyone, including performers. The open mic is always free and sign-up is at 8 p.m., with the show starting shortly after. 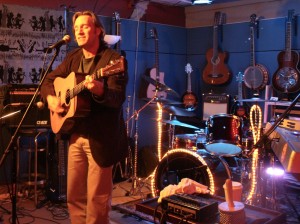 The Gypsy Cafe and Pub in Wallingford is one of the friendliest and welcoming open mics in the area, making it the choice for Thursday night. The venue is divided into two sections; one for talking and one for listening, as Linda Music Lee, founder of the Gypsy open mic and host of two years, put it. While the audience filters in and out, they’re always attentive and ready to dish out some feedback. Lee has been an open mic host for 30 years now and has graciously donated her own equipment to the cafe, including a drum kit, a keyboard, five microphones, and amplifiers, ensuring that every performer gets a chance to sound their best. The PA system is probably in the top two out of all the open mic venues, complete with a set of 15-inch QSC monitors.  The high ceilings and hardwood floors carry the sound well, filling the room and spilling into the talking portion of the venue. Decorating the stage is a variation of stringed instruments ranging from 12-string guitars, to banjos, mandolins, and Dobros, all available for use upon request. Lee herself is a well-rounded musician and participates in many band performances, playing everything from bass to drums and keys. While the regulars perform mostly folk rock and country, the newcomers usually mix it up with acoustics and blues, among other genres. The 12-minute sets keep the list moving forward, which is always full until closing at midnight. Sign-up is in-person only at 6:30 p.m. with the show starting at 7:30. The Gypsy serves food until 10 p.m..  Coffee, beer, and wine are available till closing. Since the venue is accessible to all ages, Lee would like to see more kids come out and test their confidence on stage. While people have tried out poetry on a few occasions, this venue concentrates mostly on music.

Not only is he a multi-media journalist, he is also an accomplished musician. He is the founder of SMI and drives the creative look, feel and branding for the publication. His years of writing, arranging, and performing live music in a variety of genres inform his ability to communicate the message and the mechanics of music. Roth’s work on SMI reflects his philosophy that music is the universal language, and builds community. He believes it has the power to unite people of every race, religion, gender, and persuasion.
Related ItemsLive MusicNewsSeattle Music Happenings
← Previous Story Synergia Northwest announces partnerships for Music Matters Live 2012
Next Story → New music venue now on tap in T-Town