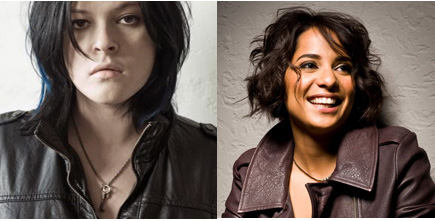 Star Anna recently released a new single, “Keep On” with Pearl Jam’s Mike McCready. The Pacific Northwest singer and songwriter along with her band The Laughing Dogs, has wowed audiences and critics with her gritty, Americana style and sound.

She and The Laughing Dogs have just been added to the lineup for Synergia Northwest presents Music Matters “Live.”

Also, one of the featured performers on the bill that evening will be NBC’s The Voice finalist and Northwest native, Vicci Martinez.

Both of these powerhouse artists will join Alan White (Yes/Plastic Ono Band) and his band White, along with the Synergia Northwest Orchestra, Howard Leese and a host of other amazing artists will come together on May 12th at the legendary and historic, Paramount Northwest Theatre  in Seattle. Proceeds from the event will go to benefit music programs throughout the state of Washington.

For more details on the concert, click the link below…

On this week’s episode of SMI Radio, I speak with Star Anna about her musical her sound, influences, inspirations and how Seattle music icon, Rachel Flotard (Visqueen) became her manager. We also talk a little about her participation in the Music Matters “Live” concert.

In the second half of the show I replay a excerpt from my interview that I did with Vicci Martinez backstage at Jazz Bones a few days prior to her jumping on a plane to fly down to Los Angeles to compete in the finals of “The Voice,” in front of a national television audience.

In addition, I feature selected tracks from Star Anna’s newest effort, “Alone In This Together” as well as the number,“Keep On” that she recorded with McCready.

Not only is he a multi-media journalist, he is also an accomplished musician. He is the founder of SMI and drives the creative look, feel and branding for the publication. His years of writing, arranging, and performing live music in a variety of genres inform his ability to communicate the message and the mechanics of music. Roth’s work on SMI reflects his philosophy that music is the universal language, and builds community. He believes it has the power to unite people of every race, religion, gender, and persuasion.
Related ItemsMusic Matters LiveNWCZ RadioSeattle Wave RadioSMI RadioSRrocks.comstar annaSynergia NorthwestVicci Martinez
← Previous Story New music venue now on tap in T-Town
Next Story → Dive into some great live music at Empty Sea Studios