Artists tell Rush to knock it off 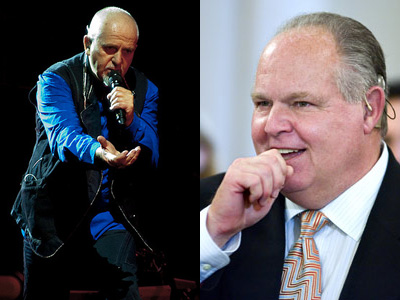 When Rush Limbaugh unleashed his vitriolic, gender-slur laden tirade on women last week, he lost more than advertisers and listeners.

A statement on Peter Gabriel’s Facebook page reads “Peter was appalled to learn that his music was linked to Rush Limbaugh’s extraordinary attack on Sandra Flute. [sic] It is obvious from anyone that knows Peter’s work that he would never approve such a use. He has asked his representatives to make sure his music is withdrawn and especially from these unfair aggressive and ignorant comments.”

The Fabulous Thunderbirds have issued their own cease and desist order for the show’s use of their song, “Tuff Enough.”

Tom Morello, of Rage Against the Machine, was even more direct, tweeting “Hey Jackass, stop pushing our music on your racist, misogynist, right wing clown show.”

Julie Mains, of the Seattle pump-rock band The Juliettes, responded with her own statement.  “I think that men standing up for women, forgoing the financial reward and the exposure to that size of an audience, is sexy as hell.  They’re setting a truly admirable example for men everywhere.”

Not only is he a multi-media journalist, he is also an accomplished musician. He is the founder of SMI and drives the creative look, feel and branding for the publication. His years of writing, arranging, and performing live music in a variety of genres inform his ability to communicate the message and the mechanics of music. Roth’s work on SMI reflects his philosophy that music is the universal language, and builds community. He believes it has the power to unite people of every race, religion, gender, and persuasion.
Related ItemsFabulous ThunderbirdsNewsPeter GabrielRage Against The MachineRushThe JuliettesTom Morello
← Previous Story Dive into some great live music at Empty Sea Studios
Next Story → Live Review: Hugh Cornwell and Glen Matlock throw down at El Corazon (3/10)