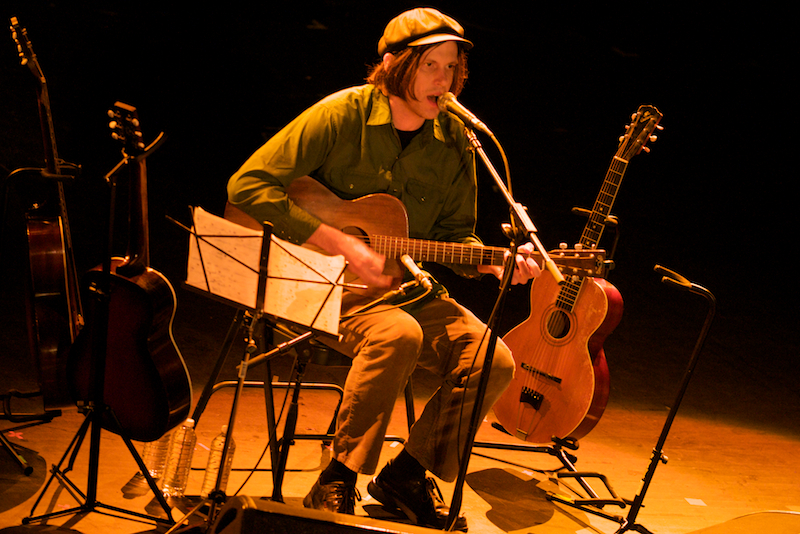 After an absence of more than a decade, Jeff Mangum faced a packed house at The Moore, April 16th. Other than some vague rumors from his close friends, no one had any idea where he’s been, or if he would ever return.

Why he chose to show himself now is still a mystery, but no one was about to question it too closely. Mangum reached Indie God status through his release of “In the Aeroplane Over The Sea,” with his band Neutral Milk Hotel.  The album was inspired by his dreams about a girl and her family in the Holocaust – often speculated to be Anne Frank.

Mangum allowed no photography, and insisted that all will-call tickets be picked up two hours before the show to prevent scalping.

These odd regulations fostered the feeling that this was a private event – this is something you are privileged to share.

There was no dramatic entrance.  Just a wooden chair and an arsenal of acoustic guitars.

Mangum casually strutted onto the stage after Elf Power’s stripped down set.

With a few powerful strums, Mangum opened with the ending tracks from Aeroplane, “Two-Headed Boy Pt. 2.” Even without the sounds of singing saws from the recording, the song carried melancholic mystery and yearning.

As his voice raised at the climax, he wailed, “God is a place you will wait for the rest of your life,” and then fell to a murmur as the song changed tempo, and ended with the tragic “Don’t hate her when she gets up to leave.”

The crowd’s booming applause didn’t faze Mangum, as he immediately went into “Holland, 1945.” It seemed as if he wasn’t interested in talking. “Is he even stable?” we wondered.

After another stirring song, Mangum mentioned his guitar had gotten out of tune. Mangum smiled and joked, telling the audience that it would be okay, it’s “just out of tune.”

Mangum’s voice, like his personality, is an anomaly. It’s not a traditional pop voice, and lacks the standard beautiful tonality heard in the falsettos of Bon Iver.  It dips and squeals and shrieks, yet carries the weight of some familiar, nostalgic something.

During the eight-minute opus, “Oh Comely,” Mangum reached for a melody that even on the recording he barely achieves. As the notes kept moving higher, Mangum outstripped his vocal range and made a barking sound.  When that passage came around again, it was natural to expect he would adjust, but he went for it. It was as if he didn’t care whether he was singing it right or not, or even if there was an audience there at all.

One audience member shouted, “Are you okay?”

“Why wouldn’t I be? Do I not seem okay?” Mangum said, to which someone up front screamed “No!”

Later, someone asked Mangum to tell the audience a story.

“That’s what I’ve been doing,” he replied humbly. The crowd cheered in response.

Over the course of the evening, the divide between artist and audience shrank. Mangum wasn’t just an obscure enigma, but a real, tangible person who, aside from his musical legacy and disappearing act, is not too different from someone who listens to his music.

As he came to the stage for an encore, Mangum heard someone yell that they wanted to dance – so he obliged with “Song Against Sex.” The long-winded, up-beat narrative prompted awkward dancing and hand clapping.

Mangum ended his set with the title track from In The Aeroplane Over the Sea, calling it “one you probably know.” He prompted everyone to sing along with his profound observations on the beauty of life.

It’s hard to pinpoint just exactly what part of Mangum’s brilliance rouses so many people, but after seeing him perform, some things stand out. Mangum represents the “weirdo” inside many people – the person who would like to run away and daydream about impossible love, the person who has seen the pressures and tragedies of life, openly admits how overwhelming it is, and wishes they could change it.

Even as he exited the stage after that song, the last words still rang out and rang true for the performance: “how strange it is to be anything at all.”

Dusty Henry got his first bite of the local music scene at a Schoolyard Heroes show in Bremerton, Wash. and has been craving it ever since. He graduated from Seattle Pacific University in 2012 with a degree in Journalism. He has written for CityArts Magazine, KEXP.ORG, SSG Music, Ballard News-Tribune, Queen Anne and Magnolia News, and more. He’s an avid record collector so if you see him digging through record bins (most often Sonic Boom in Ballard) feel free to say hello! Dusty also manages the local music blog PreAmp where he writes about smaller local acts and provides resources for bands as they continue to grow.
Related ItemsDusty HenryJeff MangumJennifer AustinLive ReviewSeattle Music HappeningsThe Moore Theatre
← Previous Story New Music Review: Of Monsters and Men “My Head is an Animal”
Next Story → Neko Case & Fitz and The Tantrums to headline Capitol Hill Block Party