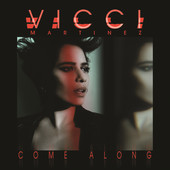 Tacoma’s own Vicci Martinez‘s long-awaited new EP has finally dropped on iTunes. She will be performing her new single, “Come Along” with her “coach” and collaborator, Cee Lo Green, tomorrow night (5/1) 9p (PST) on NBC’s “The Voice.”  The highly anticipated EP includes four tracks, including Come Along, Run Run Run, I Can Love, and a re-worked version of Hold Me Darlin’ – which was previously released on her “Live From Jazzbones” LP.

Vicci will return to the Northwest in a couple of weeks to perform at Synergia Northwest presents Music Matter “Live.” The show takes place Saturday, May 12th, at the Paramount. Proceeds from the event benefit music programs throughout Washington state.

Martinez’s roots rock/folk/ and soul sound has become well-known and respected in the Pacific Northwest.. Her beautiful yet gritty style has helped her gain a solid and diverse fan base. Vicci has produced several of her own CDs, including “Live From Jazzbones,” released New Year’s Day of 2011.

The singer/songwriter is very down to earth, and keeps grounded with a simple, yet profound philosophy. Martinez says that the key to life is to follow one’s bliss. “I am glad that I can now reach out to people that were never aware of me.” She shared, “My only reason for doing this and continuing to do this in this kind of light is to inspire everyone to do what makes them happy, whether it is music, art, sailing or whatever you want to do. Just do it and we are going to make a happy world. This (music) is something that came to me that I just love doing.”

Get her new EP “Come Along” right here.

Not only is he a multi-media journalist, he is also an accomplished musician. He is the founder of SMI and drives the creative look, feel and branding for the publication. His years of writing, arranging, and performing live music in a variety of genres inform his ability to communicate the message and the mechanics of music. Roth’s work on SMI reflects his philosophy that music is the universal language, and builds community. He believes it has the power to unite people of every race, religion, gender, and persuasion.
Related ItemsCee Lo GreenNewsSeattle Music HappeningsSynergia Northwest Synergia NorthwestVicci Martinez
← Previous Story Live Review: Matthew Sweet Breaks Up With His “Girlfriend” at The Triple Door
Next Story → Live Review: Go Radio tunes up the energy at Chop Suey