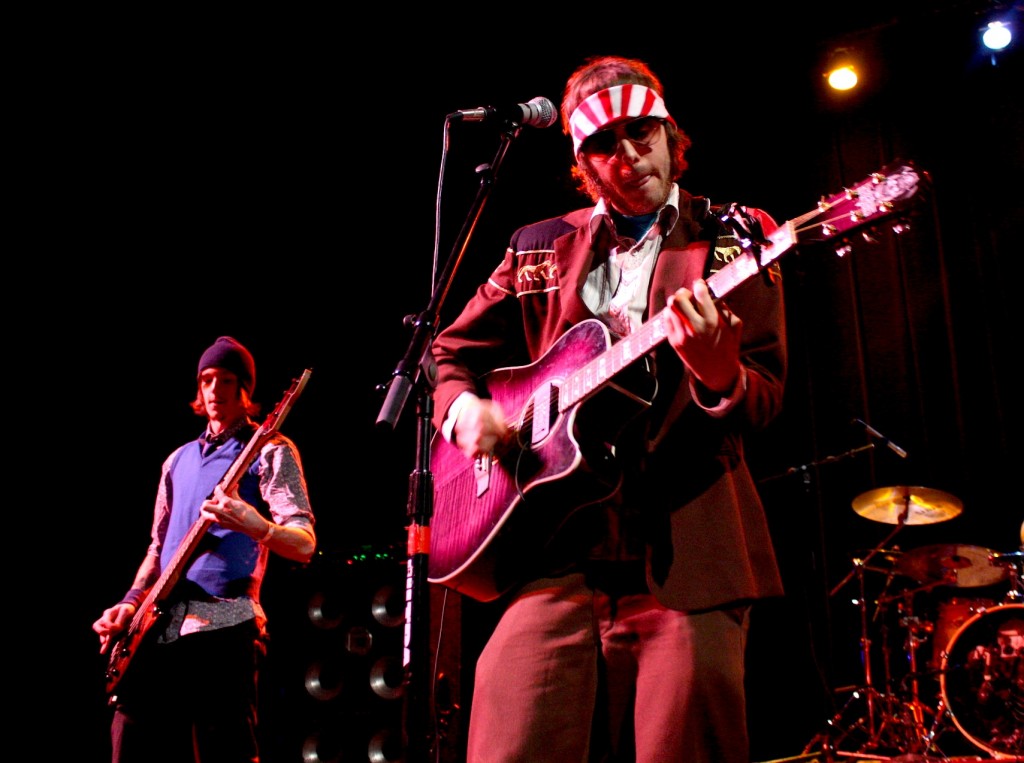 One of Washington’s most motivated musicians, Jabi Shriki, lived out a personal dream by recognizing and showcasing local talent at the first Oly Music Awards.

Inspiration for this event, held at the Capitol Theater, Saturday, May 5, came from Shriki’s everlasting love for music. According to him, the national music scene is dying and “future generations will have to turn to their local music scenes for good music,” adding that he hopes this event will trigger many like it.

The Oly Music Awards combined the honoring ceremony with a live showcase, where the top five nominees for Best Live Performance played their hearts out, hoping to capture audience votes. Hosts China Star and Morgan Picton entertained in between the 30-minute sets with jokes and small talk, calling up local legends like  Gretchen Christopher (The Fleetwoods) and Tim Basaraba to present the pick-shaped vinyl plaque, designed by local artist Laurel Henn, in categories of judge’s and audience choice.

While Shriki was the mastermind behind the event – organizing, advertising, finding sponsors – he couldn’t have done with without the volunteers and judges who listened to more than 200 entries in search of the best talent to represent Olympia. The five months of dedication and hard work paid off in a night of great music that had something for every taste.

Kicking off the competition was the winner of judges’ choice in the Pop category, Ethan Tucker Band. The energizing, yet smooth rhythms of reggae set a high standard for rest of the night and ushered the audience onto the dance floor. The three-piece group, lead by Tucker on guitar, vocals, and harmonica, shared groovy riffs and creative guitar solos, diffusing the serious matters described in the thoughtful lyrics of songs like “Cool Kids” and “What They Say.”

Next up was Radio8Ball (winner of judges’ choice in the Other category) sharing the musical talents of Chris Sandman, the Rapping Cowboy, and attempting to engage the audience with a game loosely based on the concept of Magic 8 Ball. While this act may work well on a radio show, the prolonged dialogue and short sets of acoustic guitar and funny lyrics were not enough to satisfy the audience’s musical appetite.

The fun-loving and extremely animated Fabulous Downey Brothers were perfect for the challenge of recapturing the audience’s attention with over-the-top costumes and music to match. The eventual winners of Best Live Performance in both audience and judges’ categories entranced the crowd, getting everyone to shake their stuff to their psychedelic rhythms. While this group came into existence in the form of a simple Christmas project, their contagious music has received enough attention to keep the band in business. Love them or hate them, the Fabulous Downey Brothers are an unforgettable experience.

After a few more award presentations, Judges’ Choice in the Folk category, The Blackberry Bushes, were up. The all acoustic bluegrass group featured the talents of Kendl Winter on vocals and banjo, Jes Raymond on guitar and vocals, Jakob Breitbach on fiddle, Joe Capoccia on upright bass, and Jack Dwyer on mandolin. Every musician added new depth and dimension to the enticing originals that took the audience on a thought-provoking journey.

Finishing up the night was Fans’ Choice in the Rock category, Horse Bodies – a punk rock group with tons of confidence on stage, with western bluegrass/swing influences that kept the crowd rocking till midnight. The four-piece group was extremely happy to win and showed it with their energetic performance.

Shriki was grateful for the massive support from local businesses and Olympians who took the time to check out the multi-talented musicians of Washington State. He hopes to make the Oly Music Awards an annual event.

For the full list of winners and sponsors, visit olymusicawards.com.

Not only is he a multi-media journalist, he is also an accomplished musician. He is the founder of SMI and drives the creative look, feel and branding for the publication. His years of writing, arranging, and performing live music in a variety of genres inform his ability to communicate the message and the mechanics of music. Roth’s work on SMI reflects his philosophy that music is the universal language, and builds community. He believes it has the power to unite people of every race, religion, gender, and persuasion.
Related ItemsChris SandmanFabulous Downey BrothersOly Music AwardsRadio8BallSeattle Music HappeningsThe Blackberry BushesThe Fleetwoods
← Previous Story Live Review: Funktion, Eric Tollefson and Acorn Project funk n’ roll in Fremont
Next Story → Pickwick, Vicci Martinez, Beats Antique and more at Summer Meltdown 2012