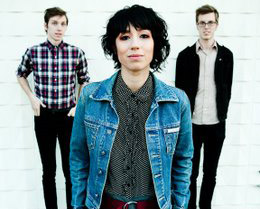 Friday night, May 18th, Deep Sea Diver and Ravenna Woods share a bill at Capital Hill’s Nuemos. We will be there to cover the show.

Last week, I spoke to Deep Sea Diver’s Jessica Dobson, Peter Mansen, and John Rains. We discussed the group’s musical influences and inspirations. Jessica also talks about the distinctions between working with her band, Deep Sea Diver, and The Shins and The Shins upcoming tour.

Deep Sea Diver has also been tapped to perform at Bumbershot 2012. Get a taste with tracks from the newest Deep Sea Diver release, “History Speaks.”

VIDEO OF THE WEEK: “NWO” AND “YOU GO RUNNING” BY DEEP SEA DIVER (FROM SOUND ON THE SOUND)

Also coming up on the next SMI Radio – an interview with Ravenna Wood’s Chris Cunningham, before their west coast tour, along with tracks from “Demons and Lakes.”

Not only is he a multi-media journalist, he is also an accomplished musician. He is the founder of SMI and drives the creative look, feel and branding for the publication. His years of writing, arranging, and performing live music in a variety of genres inform his ability to communicate the message and the mechanics of music. Roth’s work on SMI reflects his philosophy that music is the universal language, and builds community. He believes it has the power to unite people of every race, religion, gender, and persuasion.
Related ItemsBumbershootDeep Sea DiverNuemosRavenna WoodsSeattle Music HappeningsThe Shins
← Previous Story Pickwick, Vicci Martinez, Beats Antique and more at Summer Meltdown 2012
Next Story → Seattle Wave Radio presents “Live Sessions” Latin Night at The Hard Rock