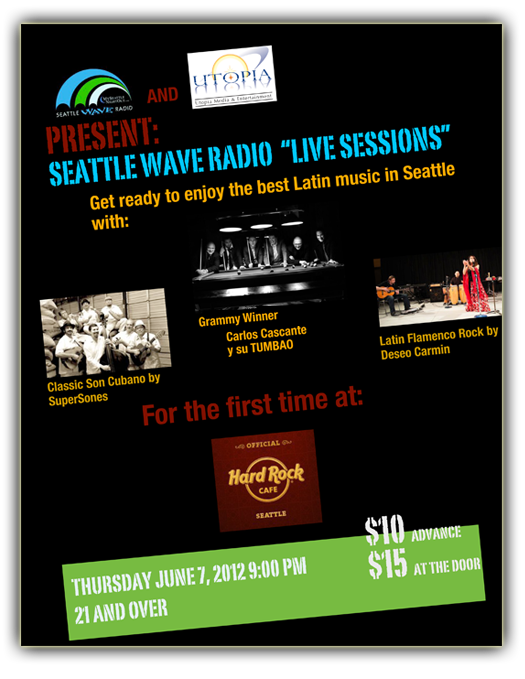 The Emerald City has one of the most diverse music scenes on the planet. Of course rock n’ roll helped put us on the music map, but we also offer a smorgasbord of other genres. If you dig R&B and funk, you got it! Do you love world music, reggae, hip hop, classical and jazz? Seattle’s got you covered there, too. And if you like to samba and salsa, our city offers some Latin flavor as well.

Seattle Wave Radio will prove it to you, as they  present their first “Live Sessions” at The Hard Rock Cafe  on Thursday, June 7th at 9:00pm.

Get more information and tickets at http://www.myseattlenightout.com/events/244875/carlos-cascante-y-su-tumbao

Not only is he a multi-media journalist, he is also an accomplished musician. He is the founder of SMI and drives the creative look, feel and branding for the publication. His years of writing, arranging, and performing live music in a variety of genres inform his ability to communicate the message and the mechanics of music. Roth’s work on SMI reflects his philosophy that music is the universal language, and builds community. He believes it has the power to unite people of every race, religion, gender, and persuasion.
Related ItemsCarlos y su TUMBAODeseo CarminLatin MusicMy Seattle Night OutSeattle Music HappeningsSeattle Wave RadioSuperSonesThe Hard Rock Cafe
← Previous Story SMI Radio Ep. 61 On Demand: Deep Sea Diver / Chris Cunningham (Ravenna Woods)
Next Story → Synergia Northwest Music Matters “Live” Complete Wrap Up (Examiner.com)