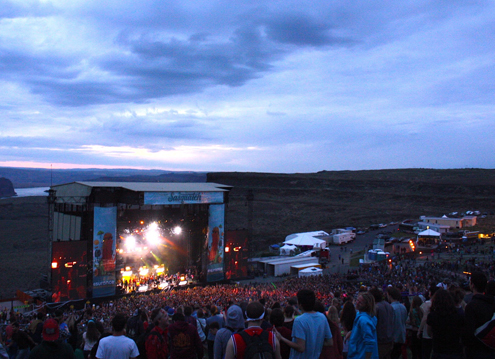 Nothing could keep away the hundreds of music lovers heading to The Gorge for some amazing talent showcased at Sasquatch this Memorial Day weekend. After hours of driving and a few more hours of stalled traffic at the entrance, this year’s attendees were ready to party and show some love to every one of the performers on the four stages. This year’s festival had something for every taste, ranging from trance-inducing dubstep to classic sounds of rock ‘n’ roll to indie music with an electronic twist. Unfortunately, most of the Friday daytime shows were missed by many due to massive traffic delays.

They kept the party going in the Banana Shack Friday night with hypnotic electronic beats and bright, flashy backgrounds which complemented not only the atmosphere of the packed tent, but the drummer’s and guitarist outfits. The crowd raved to every one of STRFKR’s creations and danced as the sun was setting. The four-piece band enjoyed their time on stage and guided the audience with their own moves and headbobs to the contagious bass riffs. Interesting synth sounds and samples added a new angle to the otherwise standard guitar, bass and drum set up and fit well into Banana Shack’s dance music theme. 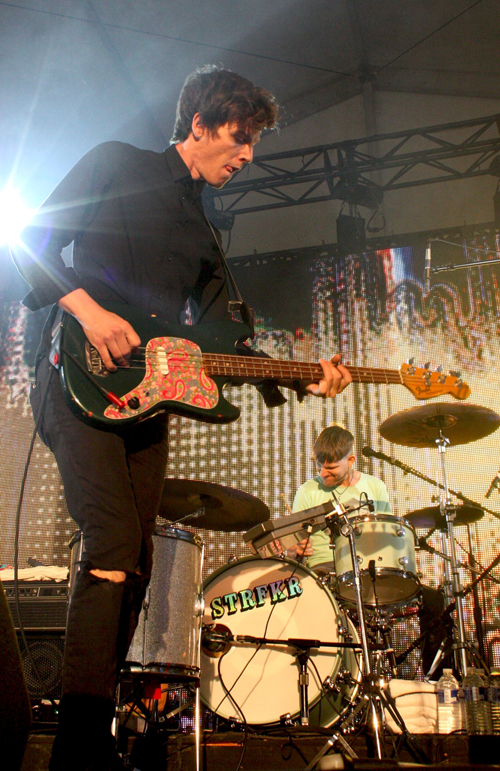 They were one of the more innovative and creative groups to perform all weekend. They combined classical instruments like the saxophone, the fiddle and a banjo, among others, with rhythmic acoustic drums and electronic beat triggers that drew a huge crowd of passersby as they heard the hypnotic creations of the talented band. While Beats Antique avoided lyrics all together, they told a story through vintage backdrops and a gifted dancer Zoe Jakes who changed into intriguing costumes, starting with belly dancing in a mask and moving on to a leopard full body suit (including face) with fancy feathers in hand. The versatile string instrumentalist David Satori impressed everyone in attendance with quick instrument changes and intercultural flavors that were brought out even further by the amazing sounds of Sylvain Carton on the sax and Sidecar Tommy in charge of rhythms. Every one of the musicians got a chance to show off their talents through attention-capturing solos and debuted a couple new songs. The band did an outstanding job bringing visual arts and a variety of classical and cultural music together in an irresistible sonic package. 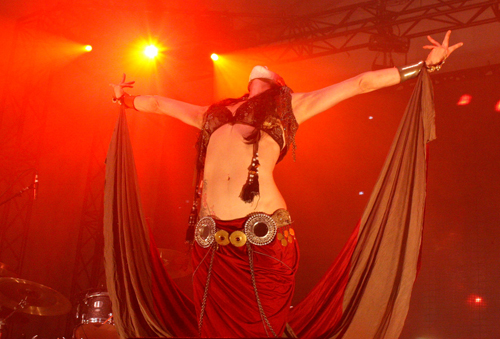 This group brought the true sounds of organic rock ‘n’ roll to the Gorge Friday night on the Bigfoot stage. Lanegan, a local legend, has been making records since the ’90s and shared some of his best creations with the crowded field of rock lovers. Strong drum beats and loud shrieks of a Gibson Les Paul engaged the happy crowd of relaxed campers spread throughout the field, some grooving to the classic tunes and others taking a seat on the grass and watching the new collaboration of the Lanegan band on the big screen as the sun began to set. 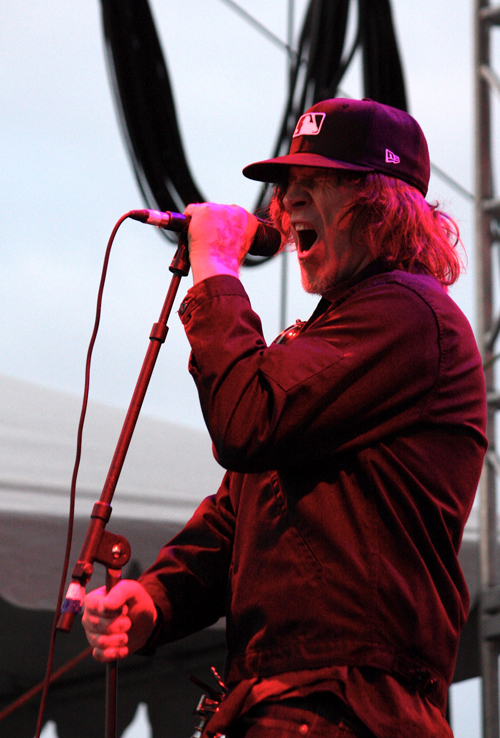 EXPLOSIONS IN THE SKY

The transient rock theme of this year’s festival continued to flow on the Bigfoot stage through the smooth sounds of Explosions in the Sky. This four-piece group didn’t require lyrics to move the audience and evoke feelings of happiness and contemplation at the same time. The band drew the largest crowd of Friday night to the open field under the starry sky, with almost everyone in attendance swaying to the enticing sounds of Explosions in the Sky. 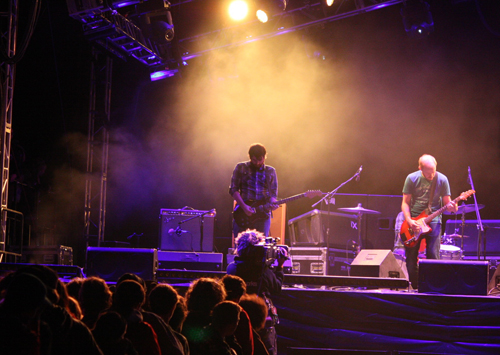 Artist Gregg Michael Gillis known as Girl Talk knows how to make an entrance and leave a lasting impression with his high energy music. He ran onto the stage with a crowd of excited ravers as fireworks were exploding above the Sasquatch stage. Gillis wasted no time getting the main stage rocking through his well-constructed mashups of old and new songs, all accentuated by loud and driving beats that brought out the dancer in everyone within earshot. He matched the energy of the crowd, raging on stage with the dozen lucky fans beside him backlit by blinding LEDs. Both sections of the floor were packed leaving many to shake their stuff on the grassy hill. By the end of his set, the fans were so riled they forced the staff to hold up the barriers to keep the masses from rushing the stage. The crowd responded really well to Girl Talk, with energetic shrieks echoing throughout the amphitheater. It was one of the more exciting moments of the entire weekend, as far as the audience’s response. 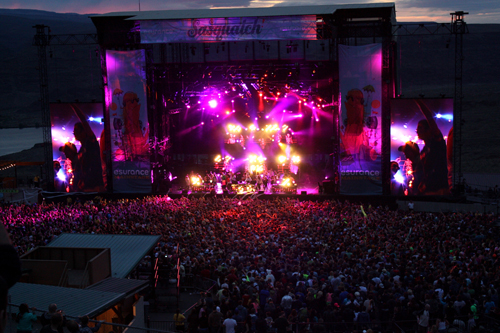 The massive dance party continued in front of the Sasquatch stage with Pretty Lights closing the night with an hour of electronic music, featuring tons of dubstep with bass beats that penetrated the chest cavities of those standing close. Large LED displays and lasers rotated through a series of pretty lights (pun intended) that attracted stranglers from other stages to the rave. The sea of people danced in every form imaginable, having a fantastic time enjoying the incredible amount of sound to be produced by one artist 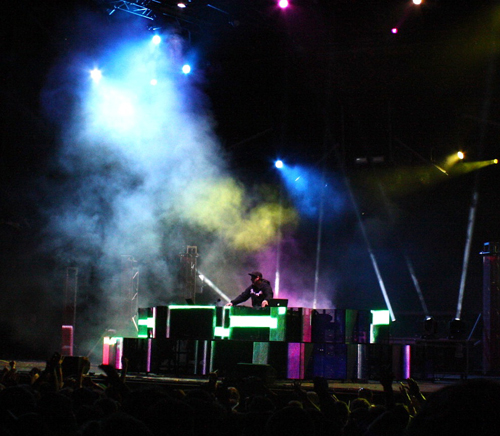 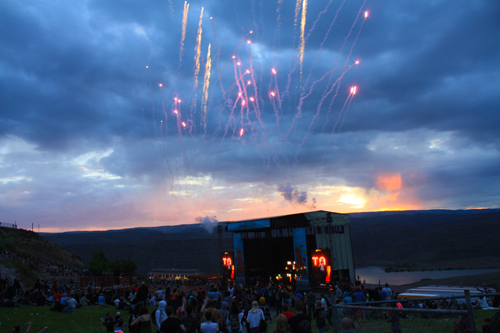 Not only is he a multi-media journalist, he is also an accomplished musician. He is the founder of SMI and drives the creative look, feel and branding for the publication. His years of writing, arranging, and performing live music in a variety of genres inform his ability to communicate the message and the mechanics of music. Roth’s work on SMI reflects his philosophy that music is the universal language, and builds community. He believes it has the power to unite people of every race, religion, gender, and persuasion.
Related ItemsAlina ShaninBeats AntiqueExplosians in the SkyGirl TalkMark Lanegan BandPretty LightsSeattle Music HappeningsSTRFKR
← Previous Story Zola Jesus saves at Sasquatch (Photos)
Next Story → Alina’s Sasquatch Day 2 Highlights (Photos)