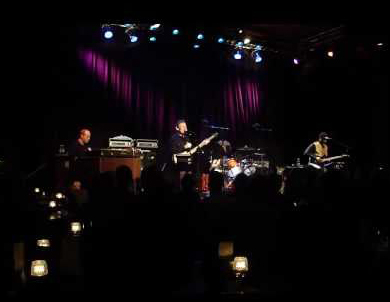 One of the most exciting aspects of any concert experience is to arrive and be immediately struck by the atmosphere in the room before the music begins. By the time Spectrum Road took flight on what would be their fourth and final performance at Dimitriou’s Jazz Alley, the energy coming from the stage had already succeeded in converting the building into a kind of vessel designed for time travel, and cruising at a very high altitude indeed.  The richness of four unique and disparate musical personalities could be detected well ahead of their introduction, as evidenced by an array of customized vintage and modern equipment. The musical offering to follow, in celebration of the late composer and drumming legend Tony Williams, manifested as an unbroken stream of colors that unfolded vividly with every piece.  The entire set was played almost without interruption, and invited the perspective of observing a process at its highest potential.

Vernon Reid, a master of the guitar who also played a master of ceremonies, appeared relaxed and in the flow, greeting the audience with a bright smile that conveyed the collective mood of the group.  He didn’t hesitate to explain why the music of Tony Williams remains an inspiration to people all over the planet, emphasizing how he remains the first in a series of artists to successfully blend jazz roots with the electric currents of rock and roll.  The evening’s proceedings highlighted works from Spectrum Road’s self-titled debut album (Palmetto Records), bringing back many of Tony’s most noteworthy compositions from the early Lifetime band.  Fans were also given a glimpse into new material that vigorously draws upon song forms infused with a vocabulary and poetic vision reminiscent of the era, touching on sounds that mirror cornerstone albums like Jimi Hendrix’s Band of Gypsies and Miles Davis’ Live Evil.

When considering the stellar lineup, all of whom dotted the canvas with brilliant streaks of individuality and virtuosity, it was Jack Bruce who truly brought the sound of surprise at the age of 69 years young.  While reprising a few of his original vocal performances from the Turn It Over album, he seemed to declare a possible future at every turn, fueling the vocal with an operatic edge and emotion that brought to life a renewed a sense of legacy this music so dutifully deserves.  Jack’s fretless bass was perched front and center in the house mix, showcasing a breadth of idyllic tone and register that demonstrated a consistent balance of lush accompaniment and striking melodic themes.  More often than not the bass could be found sweeping in and out of the tempered scale, cutting time in half and then sewing it back together, tunneling through the blues and then suddenly unraveling a scroll of descending chromatic figures – all of which managed to flawlessly lead the listener back into the pocket (and deeply!).

Cindy Blackman Santana turned in an impressive performance on the Spectrum Road album, suggesting a depth of connection with Tony’s language and facilitating an enormous platform for the drums to speak.  It wasn’t until seeing her play live, however, that one could actually absorb the message behind this invisible curtain of sound, like that of a wall-sized mural come to life.  To witness the wisdom, stamina, and uncompromising ferocity in Cindy’s approach was like ascending through multiple plateaus of rhythm, eventually dissolving into the ecstasy that enveloped her sound.  The drums were tuned similarly to the maestro himself, favoring an open snare on several tunes.  Besides her obvious attention to detail for the role, a shining contribution can be found on the tour de force “Where”.  Prefaced by a pulsing bass drum figure that literally invokes the spirit of Tony, she single handedly summons forth what sounds like a weather event, charging the air with an electricity and sweetness contained in the warm summer breeze that would precede a thunderstorm.

Listening to John Medeski on a Hammond B3 organ is breathtaking, but watching him in this context was like being given a master class on how electricity can be commandeered and calibrated in terms that are communicable through the physics of sound. Similar to the way one might mix oils as material for paint, John exhibits a rare sensibility for sonic texture, capturing the listener while engaged in a living art, and ultimately distilling before us the outer limits of his instrument with stunning precision.  On “Vashkar”, a song that hails from the inaugural Emergency album, John weaves a tapestry out of his show-stopping solo, filled with blistering phrases that somehow keep in stride with a lightness of attack and percussiveness.  As tremolos spin and gather beneath the momentum like a whirling dance of the ancient, a pyramid of chord structures emerge and are superimposed by a profusion of harmonics, tone modulations, and effects.  Although he had additional gear on stage, John remained in front of the B3 for the duration of this particular set.  It would be safe to say that no one went home feeling deprived!

Vernon Reid’s contribution to the guitar is indisputable, the accolades dizzying, though for all the anticipation and commotion that could potentially surround a master improviser and rock star, we found ourselves instantly at ease in his presence. The fluidity in Vernon’s playing was commensurate with a relaxed temperament as he addressed the audience.  While periodically reconnecting to introduce members of the band, at one point he paused to breathe, laugh, and simply acknowledge that it was Sunday, as if calling upon the silence to avail itself before picking things up again.

Aside from the jaw-dropping musicianship, speed and pyrotechnics typically associated with the world’s top stunt guitarists, Vernon came to the table with much more.  In fact, it was specifically Vernon’s open disposition and responsiveness to Tony’s music that came across as a form of liberation, as if he had directly received the gift of freedom from among one of music’s most benevolent leaders.  In listening to the guitar, one might wonder if John McLaughlin experienced the same phenomena upon entering the realms of Miles Davis and Tony Williams, knowing he must first trust in both himself and the music completely before launching into uncharted territory.

As referenced earlier by the case of John Medeski and Cindy Blackman Santana, we know how great this band sounds on record – but the cliché that “seeing is believing” may very strongly apply here, as Spectrum Road has proven itself a rare configuration of talent and tales, some of which still have yet to be chronicled in our current period of music history. 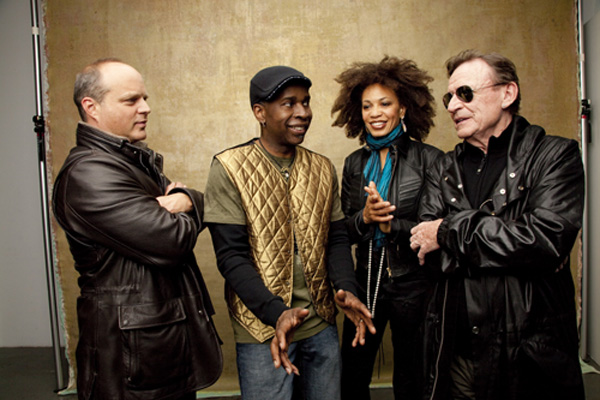 Not only is he a multi-media journalist, he is also an accomplished musician. He is the founder of SMI and drives the creative look, feel and branding for the publication. His years of writing, arranging, and performing live music in a variety of genres inform his ability to communicate the message and the mechanics of music. Roth’s work on SMI reflects his philosophy that music is the universal language, and builds community. He believes it has the power to unite people of every race, religion, gender, and persuasion.
Related ItemsCindy Blackman SantanaJack BruceJohn MadeskiJonathan SindelmanLive ReviewNewsSeattle Music HappeningsSpectrum RoadVernon Reid
← Previous Story Three Imaginary Girls 10 Year Anniversary Bash (Photo Slide Show)
Next Story → Fitz and The Tantrums reward fans with another musical gift (Free Download)