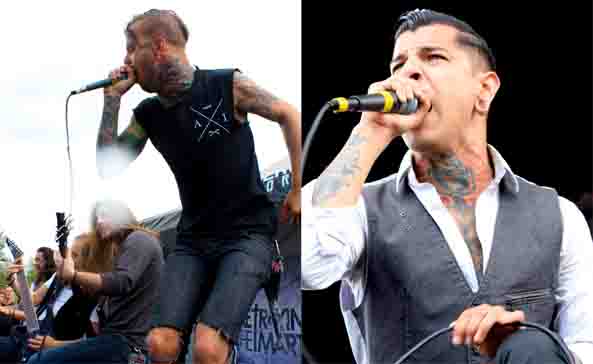 The Rockstar Mayhem Festival 2012 has been celebrating metal and breaking records in ticket sales, which pans out well for the younger bands joining the madness who are trying to grab attention and build their fan base. Taking on a big tour is not only an exciting adventure to those whose hearts belong to music, but also requires a lot of work and energy. Aaron Matts of Betraying the Martyrs and Danny Leal of Upon a Burning Body share their experience and visions so far.

What does it mean for you to be able to play Mayhem this year?

It’s been incredible. Slipknot is one of the bands that inspired most of us; it’s definitely the band that got me into this kind of metal when I was younger. To be able to tour with a band like that is an honor. It’s still hard to believe it.

Has this tour opened any doors for you yet?

We’re playing for a lot of people and playing for the fans that wouldn’t necessarily come to one of our shows, but came to see Slipknot and Slayer and a lot of the old-school metal bands…People still check us out – – maybe make new fans.

What is your favorite part of being on this tour?

Every day I enjoy it. We get to spend a lot of time with the fans and with the bands.

What location are you most excited to be playing?

I have no idea. We’re actually doing one-third of the tour on the larger stage, on the Jagermeister stage. We’re excited to be playing those shows. A bigger crowd, a bigger stage – – it’s going to be a lot better than playing on the stage we’re playing on at the moment.

Do you have any advice for future musicians to join this tour?

It’s a lot of hard work. It’s the most hard-working tour I’ve been on in my life. We wake up at 8 a.m. and go to sleep at 1 a.m. It’s the same every day; we’re working all the time. Just get some good exercise before you go.

What does it mean to for you to be able to play Mayhem this year?

What did it take for Upon a Burning Body to get in the Mayhem 2012 lineup?

We’ve been working really hard, hoping for the best…kind of got lucky to be able to be here. It takes a lot of hard work.

Who’s your favorite band to be touring with right now?

Have any opportunities presented themselves to you as a result of this tour?

Not that we know of yet. It’s open opportunity and a lot of exposure — just  trying to take advantage of that.

Do you have a favorite show or city you’ve played so far?

They’ve all been pretty sweet. Can’t complain when you’re playing in front of like 8,000 people. They’ve all been good in their own ways. We’re just excited to be playing…so far everyone’s been reacting really well.

What do you think of the stage you’re playing?

It’s great! We’re in the first seven days, been having a blast. Have yet to see what the other stage is like, but we’re hoping for the best with that one as well.

Where does the inspiration for your music come from?

Just everyday life. Things that you go through – – struggles – – stuff you have to deal with.

Do you have any advice for future musicians on this tour?

Get ready for it to be hot. And also be one of the best things you’ve ever done…It’s really cool, a really fun tour. Get ready to have a good time.

Is there anything you’d do differently if you got to do it again?

Our new record Red, White and Green is out. So pick that up. And if anybody’s going to Mayhem, get there early and try to look for us at any of the signings that we do…come say hi. We’re ready to party, let’s hang out!

The 2012 Mayhem Festival is traveling the US through August 5, so get your tickets, enjoy the legends, and check out some the new faces of metal.

You may also enjoy…

Not only is he a multi-media journalist, he is also an accomplished musician. He is the founder of SMI and drives the creative look, feel and branding for the publication. His years of writing, arranging, and performing live music in a variety of genres inform his ability to communicate the message and the mechanics of music. Roth’s work on SMI reflects his philosophy that music is the universal language, and builds community. He believes it has the power to unite people of every race, religion, gender, and persuasion.
Related ItemsAaron MattsAlina ShaninBetraying The MartyrsDanny LealHeavy MetalNewsRockstar Mayhem FestivalSeattle Music HappeningsUpon a Burning Body
← Previous Story Music shines through clouds at Northwest LoveFest (Photo Slideshow)
Next Story → Music lovers will take it to the streets at Capitol Hill Block Party