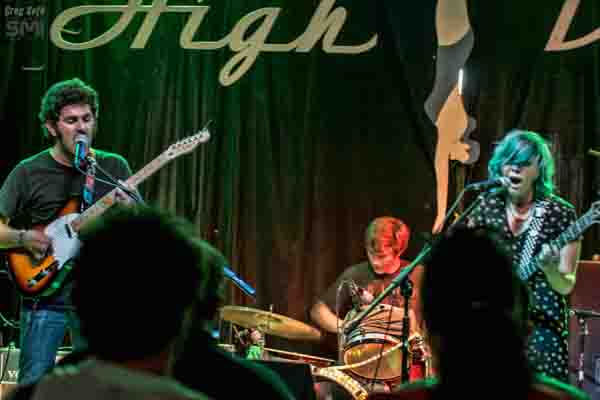 Torches at High Dive (All Photos By Greg Roth)

Torches is a little band from Pasadena that produces a big sound. Formerly called Torches in Trees, the band shortened the name and stripped down their lineup to a power trio. The current line up, together about two years now, is comprised of Azad Cheikosman (guitars, vocals and loops,) Bridgette Eliza Moody  (bass, vocals, loops and percussion) and Eric Fabbro (drums, percussion.)

This version of the band may be relatively new, but members of this tight outfit have been playing together in different capacities for over eight years. Cheikosman and Fabbro go back even further – fifteen years to be exact – to their high school days. Good bands can get by on talent and good songs. Great bands typically consist of members who have developed both individual and collective chops, refined over the years by hard work. Great bands also have established chemistry, and have been battle tested in a live environment. Those elements, as well as some brilliantly arranged songs, make Torches a great live band, as they demonstrated this week at Seattle’s  High Dive.

They opened with “Dead Face,” a track off of the band’s newest effort, Heads Full of Rust (available on iTunes.)  The number kicks off with the tasty tones of Cheikosman and Fabbro’s tribal drumming, and then Moody’s edgy, heavy bass lines. The rhythm section, consisting of Fabbro and Moody, provided a solid foundation for Cheifkosman’s sonically exquisite guitar and melodic tenor. Moody and Cheikosman’s vocal split octaves layering on the bridge added the spice. This was followed by “When You Gonna,” and then “Six,”  which could almost be considered an ode to the 80’s and 90’s British export, The Sundays. This song provided plenty of opportunity for Cheikosman to showcase his wide range of vocal textures and beautiful falsetto.

One of the highlights of the evening was a solid performance of the band’s newest single, “In My Sleep.”  On record, this is a catchy number with a solid hook chorus, but the song is even more powerful live. “In My Sleep” is a tune that very much encapsulates the band’s brilliance and spirit. “Silver Haired Girl,” featuring the haunting backing vocals of Moody, is a song that stays with you long after the last chord fades.

Torches closed out the short, but high impact set with “Out of The Desert,” another track from their newest record. The song, which features several time signature changes and a catchy chorus, was a fitting way to end the set and left us wanting more.

Torches is not a band that likes to play using a conventional rhythmic approach. If you want a raw band that plays in 4/4, you will be disappointed. If you want to see a group of talented cats that paint outside musical lines and serve up a big dish of ear candy, you will dig this band.

Check them out in Rockstar Motel…

Not only is he a multi-media journalist, he is also an accomplished musician. He is the founder of SMI and drives the creative look, feel and branding for the publication. His years of writing, arranging, and performing live music in a variety of genres inform his ability to communicate the message and the mechanics of music. Roth’s work on SMI reflects his philosophy that music is the universal language, and builds community. He believes it has the power to unite people of every race, religion, gender, and persuasion.
Related ItemsHigh DiveLive ReviewsSeattle Live MusicSeattle Music HappeningsTorches
← Previous Story Music shines through clouds at Northwest LoveFest (Photo Slideshow)
Next Story → Music lovers will take it to the streets at Capitol Hill Block Party