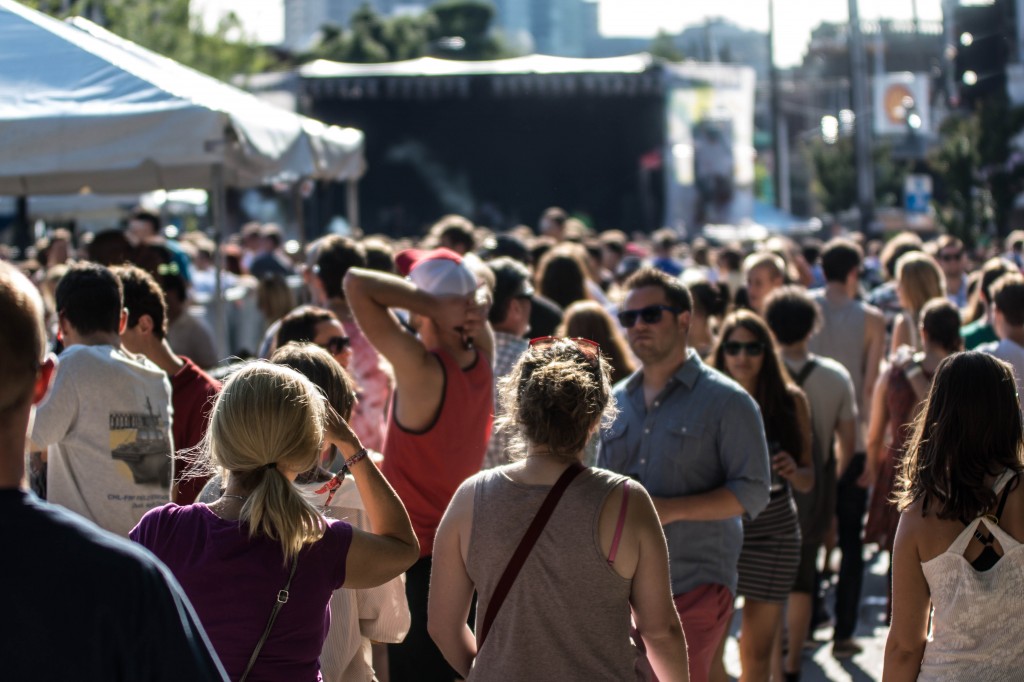 One of the most enticing urban music street festivals in the land, the Capitol Hill Block Party, is now in the rear view mirror. The once little festival that used to mainly attract the hyper-locals has grown up and matured a little… well, perhaps a lot. The three day event has a nice little buzz going and is able to attract larger sponsors, as well as hot local and national acts.

Ominous clouds hung over the city for a few days leading up to the party, with the possibility that a little rain may dampen the parade. But all turned out well in the Emerald City, as the weather cooperated and fans were treated to three days of art, music, and revelry. For those who may not have wanted to brave wall-to-wall crowds, Friday night was the night to go. By no means was Capitol Hill a ghost town that night, but attendance was certainly lighter than it was on Saturday and Sunday. This made for easy navigation around the festival grounds.

Just a few highlights from Friday included a funky performance by Fly Moon Royalty on The Vera Project stage, a gritty and blistering set by The Grizzled Mighty at the Jet City Stream Vitamin Water Live Lounge at Sole Repair, and an evening of blue-eyed soul on the main stage, courtesy of Allen Stone and Fitz and the Tantrums.

Photo artist extraordinaire Mocha Charlie captured some of the sights – check out her work below. Also, check out the recap of Allen Stone’s performance by clicking the link below…

Saturday, Day Two, started out with a gritty performance from the artist voted most likely to provide the best photo opportunities, Reignwolf. Anyone that has seen this one man rock ‘n’ roll demolition team knows that he pours his heart and soul into every note. During his show at the KEXP sessions at Barboza, a word that could be heard echoing throughout the venue was “Wow!” That pretty much sums it up. Barboza was also the scene of a wonderful performance by Lemolo, The “dream pop” duo also performed later that day on The Vera Project stage.

Some of the interesting happenings took place at the end of the evening with Fly Moon Royalty performing surprise show around midnight in the food court. There was also quite a buzz about the Major Lazer and Grimes show.

Part of the fun of attending festivals is running into other music lovers and journalists. The people who cover music in the Northwest are as much part of the story as the artists. They help breathe life into our scene. Their hard work and passion spotlight artists that may otherwise languish in obscurity. It was very cool to see  Travis Hay from Guerilla Candy chatting with Brent Amaker in the bloggers’ lounge. (Brent put on a great show earlier in the day at Neumos.)

Sunday offered some nice surprises. The Seafair “Grand Poopah” himself, Duff McKagen, ( The Fastbacks, Guns N Roses Loaded)  yeah, that guy, showed up to play a rockin’ set with Walking Papers at Sole Repair. It was a bit of a kick in the pants to see a Rock n’ Roll Hall of Famer doin’ his thing in such an intimate setting. (See Photo Slide Show Below.)

Phantogram is another act that always is interesting to see and hear. The group was in town last fall to play day three of Bumbershoot, when they went on late in the evening. It was much different seeing Phantogram play with plenty of daylight left, which made it much easier to shoot the very photogenic Sarah Barthel. (See photo slideshow below.) Phantogram played at much higher volume and intensity this time around. (Lemolo’s Kendra Cox is a huge fan and was obviously excited to see them perform, as well as meet them backstage.)

Capitol Hill Block Party almost did not happen this year. The festival continues on due to the the efforts of Jason Lajeunesse, who took the reins from former owners, Dave Meinert and Marcus Charles. Those of us who love music and the community feeling that it helps build are truly grateful that Mr. Lajeunesse was willing to take this on.

This year, the festival had a little something for everyone, and good music festivals should. Events like CHBP can be transcendent. In a world where we have fewer shared experiences and less interaction with each other because of technology, long work hours, and other distractions, music is a great conduit for bridging gaps and bringing people of all walks of life together to celebrate life. Capitol Hill Block Party 2012 was not about star power, although there was some to be found – it was about emerging stars. Yet, the biggest star that graced the Capitol Hill streets was the community that came together for three days of peace, love, and music in an urban setting. Thanks, CHBP. Let’s do it again next year!

Not only is he a multi-media journalist, he is also an accomplished musician. He is the founder of SMI and drives the creative look, feel and branding for the publication. His years of writing, arranging, and performing live music in a variety of genres inform his ability to communicate the message and the mechanics of music. Roth’s work on SMI reflects his philosophy that music is the universal language, and builds community. He believes it has the power to unite people of every race, religion, gender, and persuasion.
Related ItemsAllen StoneCapitol Hill Block PartyDuff McKagenFestivalsFitz and The TantrumsFly Moon RoyaltyJet City StreamMacklemoreMocha CharliePhantogramReignWolfSeattle Live MusicSeattle Music HappeningsThe Grizzled Mighty
← Previous Story Q&A: Jazzman Ravi Coltrane still moved by the spirit
Next Story → Seattle Living Room Show: The Good Hurt & Levi Weaver (Photo Slideshow)