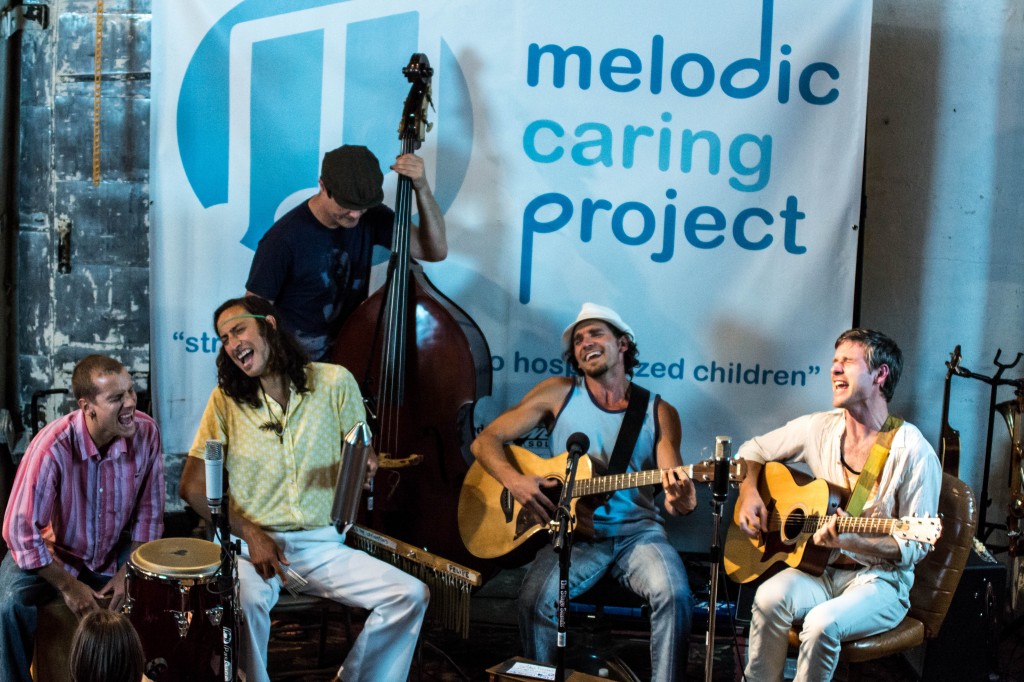 Luc and The Lovingtons (All Photos By Greg Roth)

Last Friday on a hot summer evening, deep in the heart of the SoDo district, Seattle Living Room Shows and Melodic Caring Project tag-teamed to bring Northwest music fans a stacked bill featuring Blake Noble, Impossible Bird and Luc and the Lovingtons. All three acts are diverse in terms of style and delivery but some things they do have are common are superb chops, charisma, and music that breaks barriers and defies categorization.

First up on the bill was Blake Noble who hails from The Land Down Under. Noble recently relocated to the Northwest and in a short period of time has made quite the impact. Noble put on an acoustic guitar clinic for the appreciative audience. He often incorporated the Australian didgeridoo (a wooden trumpet-like drone pipe) into several numbers, often playing both the acoustic guitar and indigenous instrument simultaneously. The didgeridoo provided a solid base line for Noble’s clever chord progressions to soar over. Noble’s nimble fret work was as visually impressive as his music.

Second up was the dynamic duo of Impossible Bird consisting of Nick Drummond on guitar and vocals and Tyler Carson on fiddle. Drummond’s beautiful tenor coupled with Carson’s sonically exquisite violin create incredible soundscapes. One of the musical highlights from the duo was an amazing arrangement of the Paul Simon classic “Late in The Evening” from the film “One Trick Pony.” Drummond and Carson are a tight unit with wonderful chemistry. These two cats effortlessly locked in for some celebratory jamming – it was pure magic.

Impossible Bird will be back in town for a show at the 2nd Annual Garden Concert at North Seattle Garden. Tickets are still available and can be purchased at brownpapertickets.com

Last on the bill was the funky, folk, reggae and world musical stylings of Luc and the Lovingtons. With a strong affinity for a groove, this quintet took fans on a musical trip. They effortlessly transported fans to a tropical island, then dropped them smack-dab in the middle of Bourbon Street with their joyous and uplifting sound. By the end of their set, several audience members were on their feet moving to the music.

What made this show extra special was the fact that it was streamed live to some very special fans, Ariana and Daisy, who viewed the sold out show from their hospital beds via UStream and Melodic Caring Project. Throughout the show the artists gave shout outs to the children that were watching the broadcast. Anyone that has been to a Seattle Living Room show can attest to the fact that these events are special because of the lack of barriers between the artists and the audience. Thanks to Melodic Caring Project, even more barriers were removed allowing those not able to attend live to watch the show online from the comfort of their home and in a special case, a hospital bed.

For those of you that missed the show you can see some highlights on demand by visiting http://www.ustream.tv/melodiccaringproject.

Not only is he a multi-media journalist, he is also an accomplished musician. He is the founder of SMI and drives the creative look, feel and branding for the publication. His years of writing, arranging, and performing live music in a variety of genres inform his ability to communicate the message and the mechanics of music. Roth’s work on SMI reflects his philosophy that music is the universal language, and builds community. He believes it has the power to unite people of every race, religion, gender, and persuasion.
Related ItemsBlake NobleImpossible BirdLuc and The LovingtonsMelodic Caring ProjectSeattle Living Room ShowsSeattle Music Happenings
← Previous Story Live Review: Ravi Coltrane blazes musical trail through Jazz Alley (Photo Slideshow)
Next Story → Live Review: Sigur Ros Mesmerizes The Paramount