Live Review: Jack White easy to hear but hard to see at WaMu

By Alicia Kamenick on August 15, 2012@corianderstem 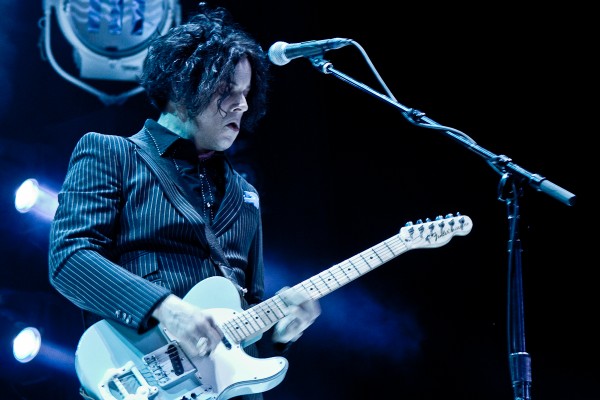 Let’s just put it out there right away: the WaMu Theater is a terrible venue for concerts. It’s a warehouse built for boat shows and other giant events that fit into a cavernous space.  And when you go to a concert there, that’s exactly how it feels – like they took a giant space, threw together some dividers, added a stage and some chairs, and declared it a concert venue.  I’d been there for two previous shows, and they were nothing stellar, with muddy sound.

Jack White’s show Tuesday night was my first experience with a general admission show there, and I’m hoping never to be compelled to do a GA show there again. I’m just straight-up too short, and the sound gets too muddy if you dare to venture out of the middle section to try and find a better place to stand.

Because I couldn’t see (usually I’m able to shift and shuffle into a spot where I can see well enough, if I can’t get right up front), I had a hard time getting into the show and really enjoying it, despite being a fan of his music. But that’s not Jack White’s fault, and I can’t deny that the show was good, even though it’s just not all that fun if all you can see are the backs of the heads of the many people crammed in front of you.

The setlist drew from White’s catalog of various musical incarnations: The White Stripes, The Raconteurs, The Dead Weather, and his recent solo album Blunderbuss. The all-female backing band were well-matched with White, whether they were tearing through a heavy blues stomp or accompanying him on more delicate songs like We’re Gonna Be Friends.

(At least I think it was all women up there. As I never did see the entire group all at the same time, I may have missed someone. And the introductions were swallowed up in the giant space. So my apologies to any men not named Jack White who may have been on stage.)

Highlights included the hard-driving Blue Blood Blues, I’m Slowly Turning Into You, and Seven Nation Army, in which White had the audience sing the famous riff underneath the final verse.  Bringing the show almost-full circle back to Pokey LaFarge’s Americana sound, the night closed with a cover of Leadbelly’s Goodnight, Irene.

Dead Leaves and the Dirty Ground (The White Stripes)

Weep Themselves to Sleep

Top Yourself (The Raconteurs)

I’m Slowly Turning Into You (The White Stripes)

I Guess I Should Go To Sleep

The Hardest Button to Button (The White Stripe)

Steady, As She Goes (The Raconteurs)

Take Me With You When You Go

Ball and Biscuit (The White Stripes)

Alicia is a Midwest transplant who loves Seattle but misses thunderstorms. Her musical obsessions began when her coolest aunt gave her a copy of K-Tel’s Rock 80 album for Christmas when she was 7. She spent many years studying piano and voice, but the force of rock and roll won, so while she still sings in a local chorale, her true musical passions lie more with The Beatles than with Beethoven. When she’s not working at her job in HR, she can be found singing bad pop songs at the top of her lungs … although sometimes she does that
Related ItemsAlicia KamenickJack WhiteLive ReviewNewsPokey La Farge and the South City ThreeSeattle Live MusicSeattle Music HappeningsWaMu Theater
← Previous Story New Music Review: Gaytheist – ‘Stealth Beats’
Next Story → Rewind Record Review: ‘A Night At The Opera’ by Queen