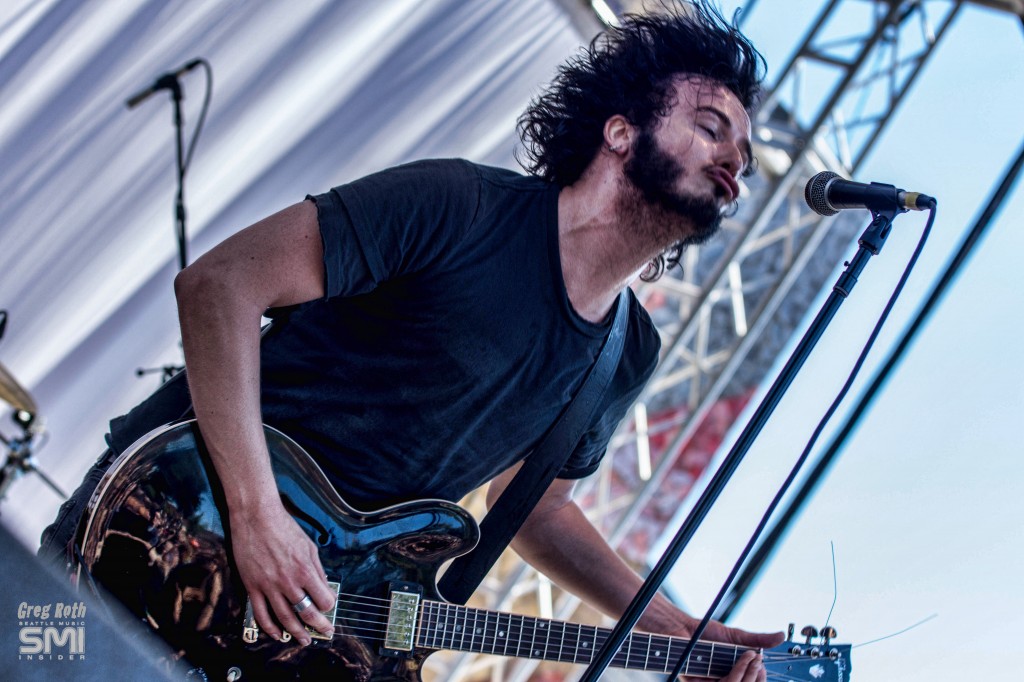 Monday of Bumbershoot 2012 was the perfect way to finish Labor Day Weekend. While every day showcased new music encompassing all genres, the third day of the festival concentrated more on rock and electronic music (at least for the main stage).

As for the best musical performance of the day, Reignwolf is without a doubt the winner. There’s no denying this young star can put on a show and gather a crowd any musician would envy. Reignwolf was one of the most awaited artists to take the Starbucks stage and the crowd was obviously pleased with the set. He was backed by a band for most of the show, complete with a percussionist beating on buckets, who was asked to join Reignwolf on stage just minutes before the show. The bluesy rock songs excited the large audience, with most jumping to the Hendrix-like riffs and dancing in every style. His amazing guitar solos were always followed by joyful shrieks and loud applause from the lawn.

While Reignwolf’s signature raw rock ‘n’ roll sound was created with his electric guitar, kick drum and great vocals, he switched it up a bit by trading his guitar for a bass and an electric mandolin for part of the set. Reignwolf hopped on the barrier and serenaded the front rows mid-set, enthralling the audience and winning over new fans. His energy on stage was enticing and dictated the audience’s positive response.  Everyone gladly clapped along when asked, and hung on every note. He reclaimed the stage for the last few songs to give the audience what they came for – – organic, gritty rock.

This gifted artist gave it his all in every song, the last performance stood out from the rest and left the crowd demanding an encore. As if playing guitar one-handed wasn’t enough of a challenge, Reignwolf jumped over the empty drum kit and started throwing down beats behind his guitar (which at this point sustained a string loss). After the unforgettable finale, the fan favorite rocker abandoned his guitar to produce tons of feedback, while the raging applause and screams continued, demanding his return. He closed the set (for the second time) with “This Is the Time,” a very appropriate song considering his growth in popularity and as a musician over the past few years. Reignwolf was on many lists as the show to see this Bumbershoot and his performance lived up to the great expectations. 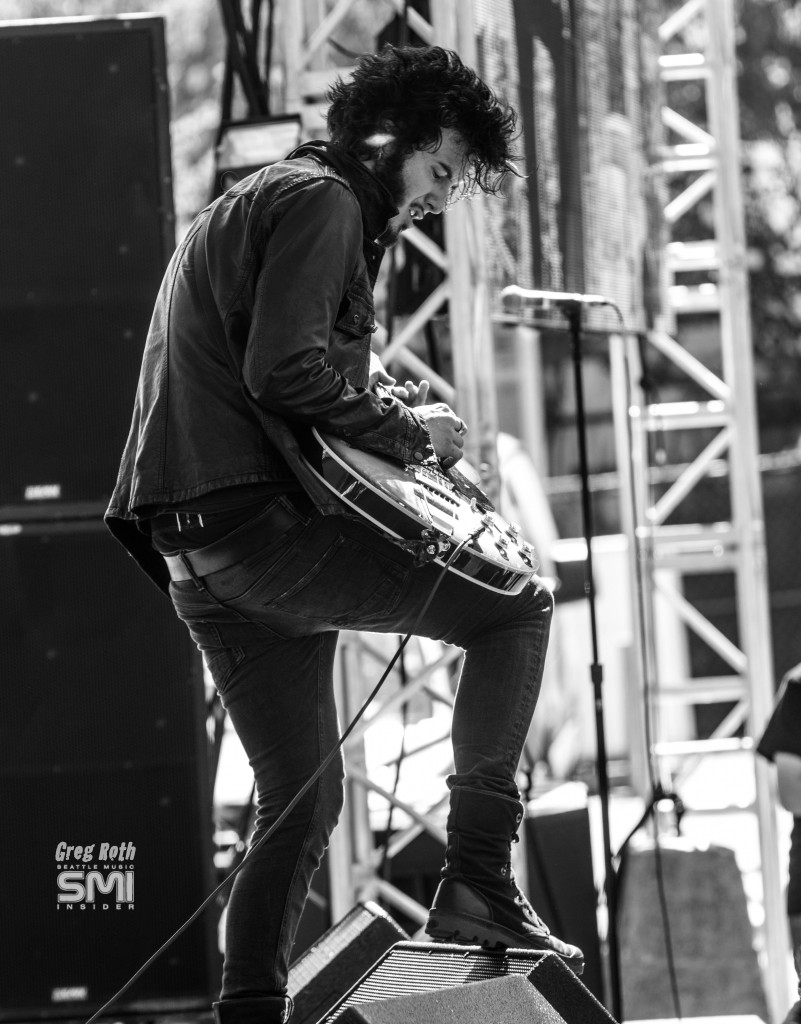 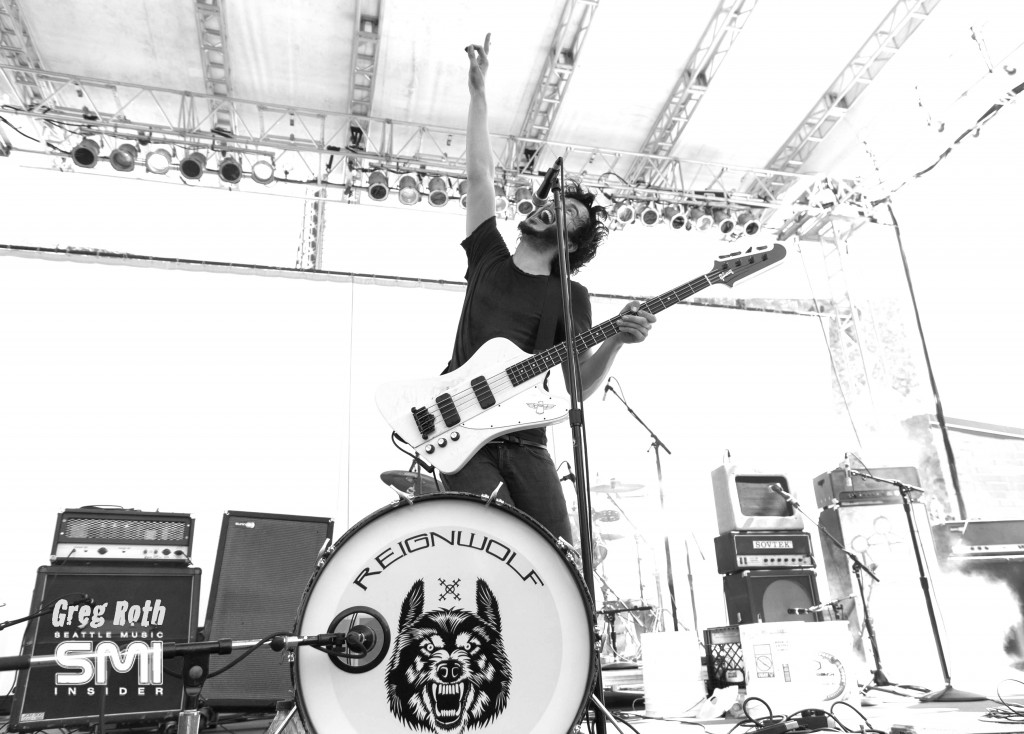 With most of the shows taking place in open fields, lines were unusual. Foxy Shazam, however, managed to surprise and gathered a long line of anxious bystanders waiting for the Exhibition Hall to open its doors. This band’s energy was the highest of the entire weekend, no contest. Vocalist Eric Sean Nally was literally tumbling across the stage and doing headstands in the middle of songs. Everyone from the horn player to the keyboardist jumped, spun, and did everything imaginable while playing, surprisingly staying on time. All of the movement was almost too much to watch, but it’s one of the over-the-top attributes that put this group on the map. Their upbeat rock songs were perfect to dance and sing along to, but the performance itself was a bit too hyper to watch all the way through for some. 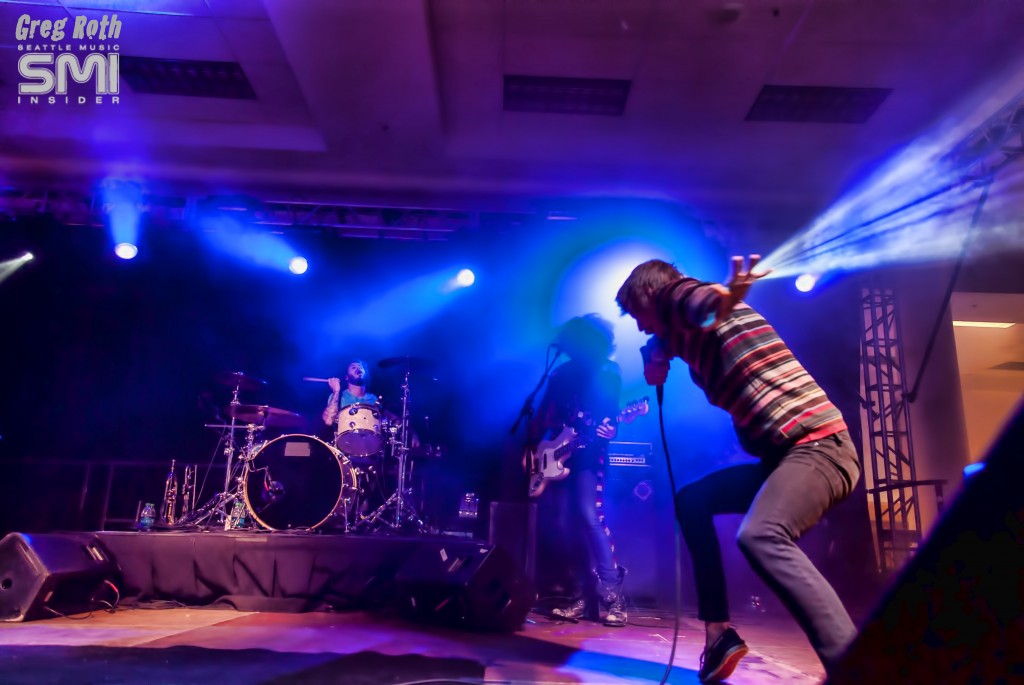 Funk-rock legends Fishbone graced this year’s Bumbershoot with a fantastic show in the Exhibition Hall. Excited fans rushed into the building the moment the doors opened up to the public, grabbing up the best spots. This experienced group perfected a style of performing that captures listener attention and holds it until the last note. Fishbone’s extensive set up and ability to swiftly switch between instruments and vocalists was impressive to watch throughout the hour-long set. Every member exuded pleasant vibes, enticing the audience and spreading the need to move in every direction. Fishbone’s show was one of few that filled the Exhibition Hall close to capacity, proving they deserved to play a bigger venue. 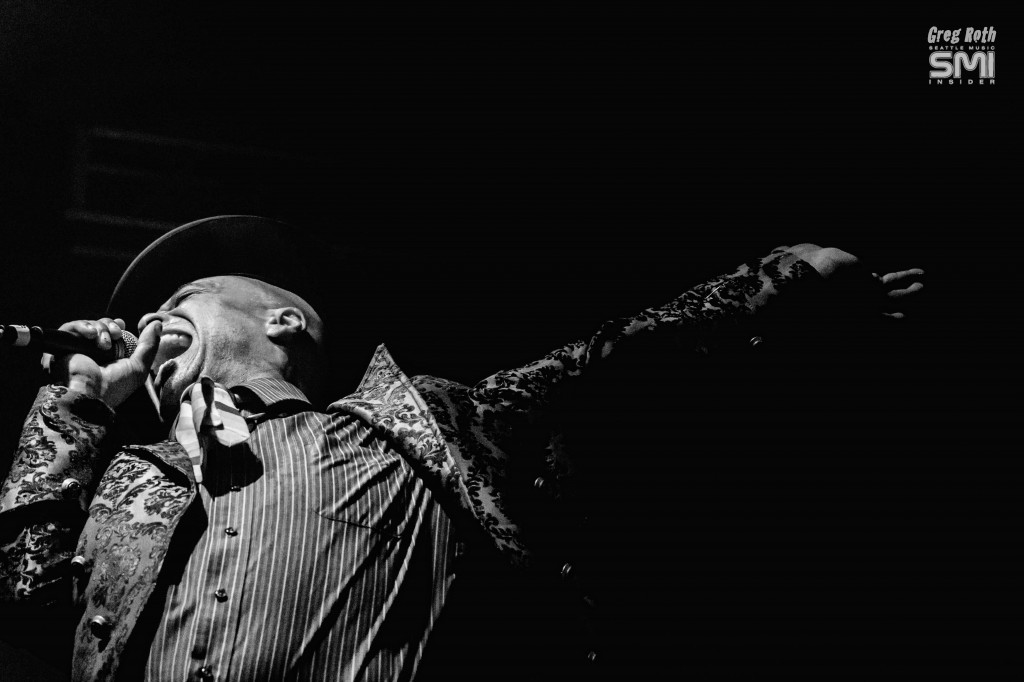 Kina Grannis put on a sweet, intimate show on the Starbucks stage as the day began to wind down. Her beautiful voice echoed through the field, bringing in more spectators with every song. The blending of acoustic guitar and cello worked well in her mellow, down to earth style, which invited the crowd on a relaxing journey through her story. Per fan request, Grannis performed a song in Japanese, further underlining her amazing ability to control her vocals and deliver any note in perfect pitch. 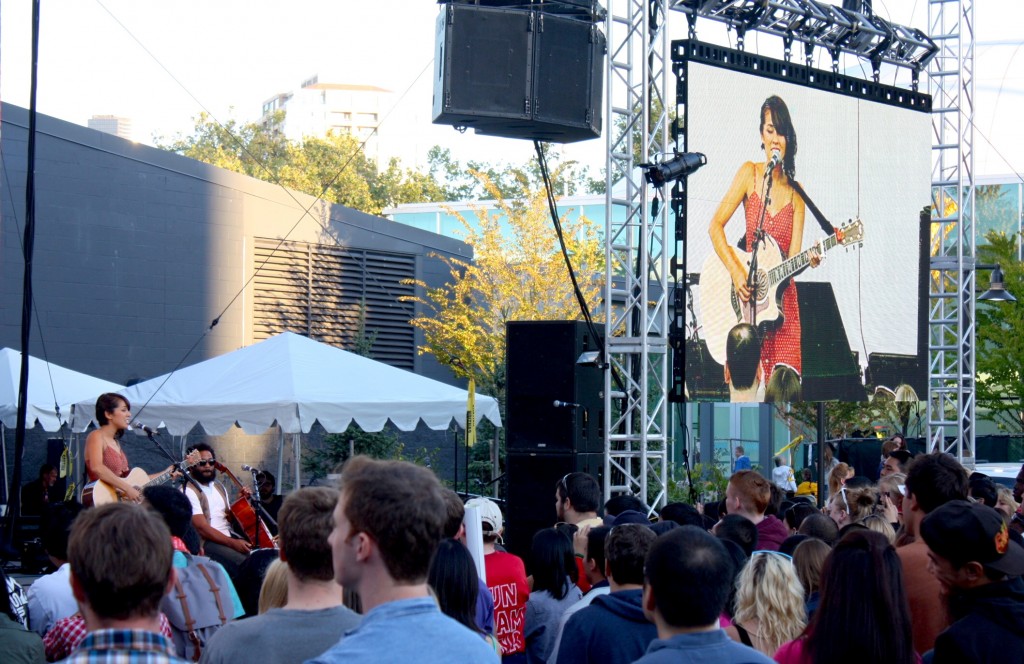 After Grannis stepped off the stage, the long-awaited Hey Marseilles started to set up. Those who gathered in time, watched the gorgeous sunrays bounce of the Space Needle which happened to be directly behind the stage. Once sound check was complete and the band ready to rock, the crowd welcomed them with warm and encouraging applause. Everything about Hey Marseilles justified the entire day’s wait. The blending of cello, viola, and trombone with the guitar, keys and drums were flawless and accented all of the right parts in each song. Vocalist Matt Bishop performed outstandingly, conveying emotion through every word and backing it with perfect rhythms on acoustic guitar. Judging by the Bumbershoot performance, this Seattle group is on its way to bigger things. 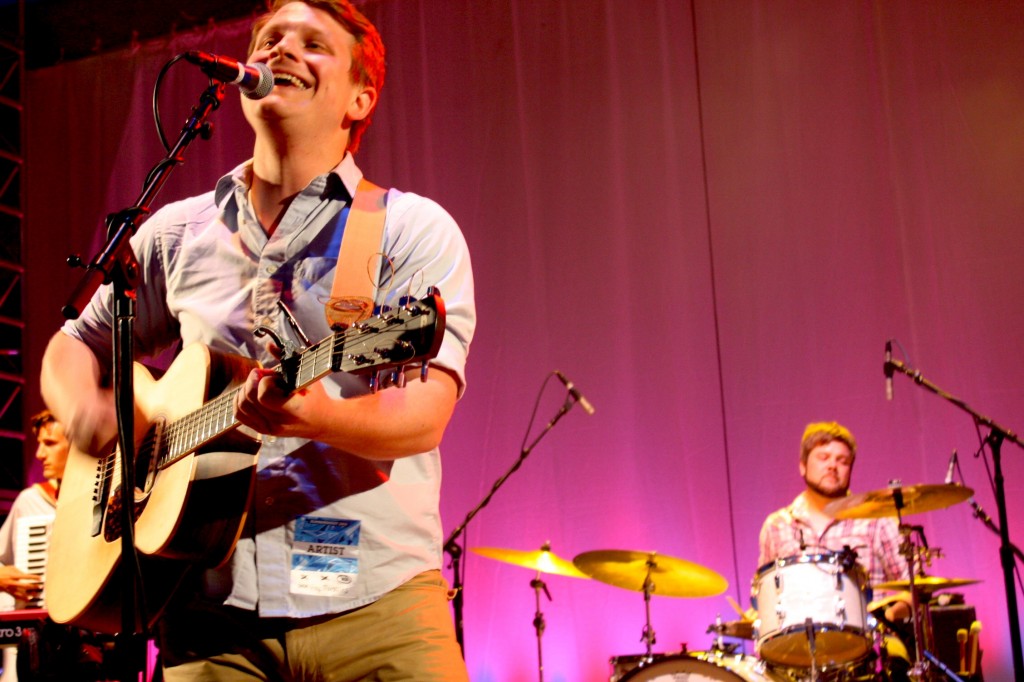 Monday’s lineup faired well for Bumbershoot 2012, drawing in the largest crowds of the entire weekend. This year’s festival was a great representation of what it’s become over the years – a melting pot of talent and a testament of what can be achieved with a vision.

Not only is he a multi-media journalist, he is also an accomplished musician. He is the founder of SMI and drives the creative look, feel and branding for the publication. His years of writing, arranging, and performing live music in a variety of genres inform his ability to communicate the message and the mechanics of music. Roth’s work on SMI reflects his philosophy that music is the universal language, and builds community. He believes it has the power to unite people of every race, religion, gender, and persuasion.
Related ItemsAlina ShaninBumbershootFishboneFoxy ShazamHey MarseillesKina GrannisReignWolfSeattle Music Happenings
← Previous Story Q&A: Bela Fleck continues to seek out musical adventures
Next Story → Live Review: Joey DeFrancesco Trio astonish Jazz Alley (Photo Slideshow)