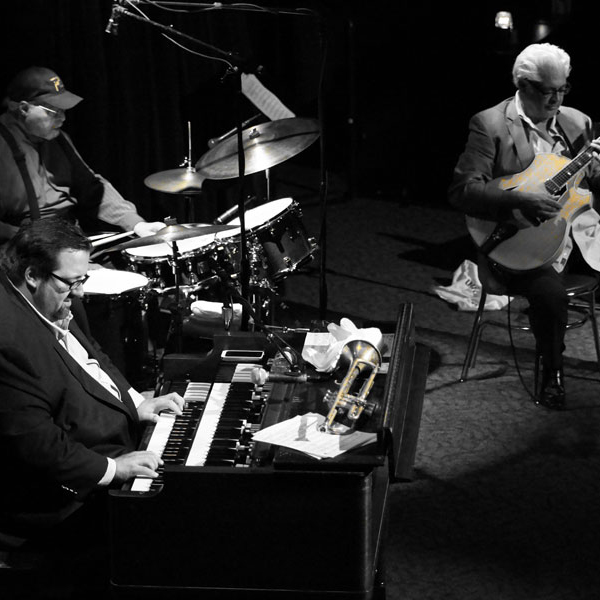 Depending on your city, catching the Joey DeFrancesco Trio on tour could mean seeing the B3 organ master in any number of configurations. Always worth the ticket, it’s perfectly reasonable to expect that during the course of a single set, one might relish just about every virtue for distinguishing this instrument, and how it came to be such a force in jazz. What arrived in Seattle last week at Dimitriou’s Jazz Alley was no ordinary trio, but an assemblage of living history that conveyed with remarkable insight what this music is all about. Joey began by welcoming the audience so warmly with his brand of east coast humor that it almost felt like we were hanging out in his living room.

When introducing the band, consisting of legendary drummer Jimmy Cobb and guitar voyager Larry Coryell, he confirmed the show would be much more than a dreamy night of nostalgia. “If you know anything about the history of jazz and all the great music that has been made, the greatest musicians that are out there still playing, still creating, still being innovative and killin’ it… You’ll know what I’m talking about, and who I’m talking about up here tonight!” Although the bill suggested a tribute to the music of Jimmy Smith and Wes Montgomery, Joey and Larry actually knew both of these masters. These relationships enabled them to craft a deep, rich experience tailored by superior musicianship, so distinctly present, that it felt more like witchcraft.

By the time Grammy-nominated vocalist Roberta Gambarini was invited to the stage as a special guest, another door opened to an extraordinary place, where only few audiences on the planet could ever hope to be.  While paying homage to Dizzy Gillespie’s Sonny Side Up (Verve), she captured the essence of Ella Fitzgerald with her flawless technique.  Inside of a single tune, that being On the Sunny Side of the Street, the magic of an entire era scrolled by with multiple solos in succession, as originally laid down by tenor titans Sonny Stitt and Sonny Rollins, and bebop chairman Dizzy Gillespie.  Executed with astonishing accuracy, and with a range comparable to Sarah Vaughan, she embedded original lyrics into her already impressive command of the vocal “scat” language, rendering listeners breathless.

Throughout the evening, Larry would occasionally draw upon memorable themes penned by his beloved heroes, quoting classical icons like Bizet, Stravinsky, and Gershwin.  His attack and phrasing would at times embody a pianism reminiscent of Lennie Tristano.  Then as suddenly as we heard these motifs, Larry could be found crying the blues as if it were being reborn – serving up the kind of musical cocktail that exhibits a rare abundance of music absorbed within the confines of his guitar.  Joey almost always ramped up his solos gradually with restrained melodicism, and then in isolated moments would take off like an Italian sports car, often quoting many familiar standards as if he were throwing cherries on top of a row of ice cream sundaes for his adoring fans sitting in the front row.

Jimmy Cobb, much like his contemporary, Roy Haynes, can still bring a larger-than-life presence and facility to the drums – even at the age of 83! (He could easily pass for being at least 20 years younger.) The sound and spirit behind some of jazz’s most coveted albums came cascading forth, spilling over into a reservoir that filled the room.  Jimmy came over as an encyclopedia of rhythm – sharp on forms, enjoying the view atop every melody, and so articulate he never missed a single cue.  While at home in the trio format, he contributed equally to the role of vocal accompaniment for Gambarini, bringing to the table his prior experience with greats Billie Holiday, Sarah Vaughan, and Dinah Washington.  Aside from tunes featured from the recent Joey DeFrancesco release, Wonderful Wonderful (High Note), on which he appears with Larry Coryell, he offered gems like Wagon Wheels, where Jimmy applied his personal stamp upon the signature Shelly Manne part as originally heard on Sonny Rollins’ Way Out West (OJC/Contemporary.)

DeFrancesco may be the youngest member of the crew at 41. However, turning pro by age 10 signifies an almost cryptic wisdom, especially as he appears grinning at the audience from behind the organ, replete with powerhouse chops, and a truly musical personality that channels every master who preceded him. While intermittently showcasing his versatility on muted trumpet, it was clear he was capable of reproducing just about every lick from Miles Davis’ days fronting the Prestige-era quintet of the 1950’s. As the band made in-roads to Stardust behind Gambarini’s vocals, you needed to blink twice to break the spell from this apparition, a scene that played out like a chance meeting between Carmen McRae and Miles Davis.  The lyric was expressed with unequivocal conviction, and Joey’s trumpet responded in kind, like a supporting actor on the silver screen – all while holding down the bass with his feet!

Just as notable was Coryell’s show-stopping solo spot on the acoustic guitar – a trance-inducing adaptation of Ravel’s Bolero.  From its quiet, raga-like beginnings, a fantastic journey ensues, obscuring within earshot every possible genre, bringing about flashes of Ennio Morricone, Paco Peña, and even Jimmy Page via his early performances of White Summer. At its apex, he uses the entire range of the guitar, with waves of melody soaring above each texture and stage of harmonic development.  The piece stands as a fitting epitaph for the maestro himself, and would be reason alone to return every night for another ride.

In reference to a statement from his recent interview ahead of the band’s four-night residency at Dimitriou’s Jazz Alley, Jimmy Cobb sums up the evening’s proceedings eloquently: “Keep hope alive!  Keep the music alive, you know, because jazz makes up only a very small percentage of the music business. I’m just hoping to make that number bigger, trying to educate people so they can pass it on to others and see the music prevail, you know.”

May the music prevail, and may it be engraved upon the hearts of all who turned up to make this experience a truly great occasion.

Not only is he a multi-media journalist, he is also an accomplished musician. He is the founder of SMI and drives the creative look, feel and branding for the publication. His years of writing, arranging, and performing live music in a variety of genres inform his ability to communicate the message and the mechanics of music. Roth’s work on SMI reflects his philosophy that music is the universal language, and builds community. He believes it has the power to unite people of every race, religion, gender, and persuasion.
Related ItemsDimitrious Jazz AlleyJimmy CobbJoey DeFrancescoJoey DeFrancesco TrioJonathan SindelmanLarry CoryellRoberta GambarianiSeattle Music Happenings
← Previous Story Bumbershoot 2012: Reignwolf rules day three
Next Story → Hot Bodies in Motion steam up the Crocodile (Photo Slideshow)