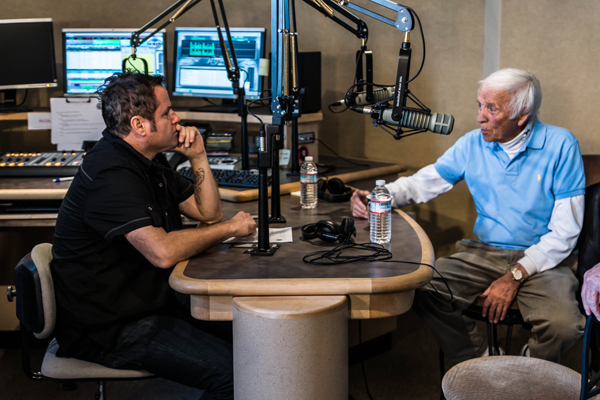 Terrestrial music radio was once a very powerful force and primary navigator through the musical desert. Before the advent of the internet, MP3 players, iTunes, Pandora, Rhapsody, Spotify, Napster, and all the rest… radio was the de facto delivery system for bringing the latest and greatest music to the masses.

You could even say radio stations were the original social network. You could call your local DJ, say it, and you knew they were going to play it. There was a real bond between the audience and the on-air personalities, and the studio was a virtual hub.

When music radio was done right, it was more than just a music delivery mechanism, it was a powerful art form it its own right. Back in the 60’s, Seattle had its own radio Picasso and KJR AM was his canvas. Pat O’Day was entertainer and curator, and in the process helped put Seattle on the national music map.

Back in the day when rock n’ roll was still in its’ pre-tween stage, O’Day was Seattle’s highest-profile DJ and the region’s dominant dance promoter. His reign as “king maker” lasted for nearly a decade. In its heyday, KJR garnered a 37 percent rating, which was an unprecedented accomplishment for radio at the time.

Marco Collins was DJ, assistant program director, and music director at 107.7 The End during the 90’s and helped introduce the world to bands like Pearl Jam, Alice In Chains, and Nirvana. The new Seattle sound became known as “grunge.” Record companies, sensing there was gold in them there Northwest hills, sent armies of A&R reps to sign the next big Seattle act and cash in. (You can read more about Marco here.)

O’Day and Collins were key taste-makers in their particular eras. Their contributions to the Seattle and Northwest music scene are so significant that the Rock n’ Roll Hall of Fame inducted these two for their contributions during their respective radio decades.

O’Day and Collins swapped tales and shared some of their favorite tracks. Listeners were fed a musical meal of some of the greatest music to come out of Seattle. Can you say Hendrix, Pearl Jam, Soundgarden, The Sonics, The Fabulous Wailers? Speaking of The Fabulous Wailers, Buck Ormsby, from the classic Northwest group was also in studio for the show. He and O’Day go back many decades, and Ormsby shared some wonderful stories about his work with The Wailers and The Sonics – both of whom have inspired contemporary artists such as The Black Keys and The Raveonettes.

O’Day and Collins definitely share admiration for each others contributions. O’Day had this to say about Collins: “Marco is wonderful because Marco is exploring new things for his listeners. Online broadcasting at its best is when you provide perpetual emotion. Give people information, make them smile or make them cry or do something, and Marco is exploring new ways today make them smile, cry, or whatever – perpetual emotion. That’s radio at its best, and that’s Marco. I don’t know if he does it for himself or his listeners, but I kind of imagine that it is kind of tied to wanting to entertain and please people. I know that’s what makes my motor run and his too. Marco wouldn’t have achieved the Rock n’ Roll Hall of fame if he wasn’t pleasing people.”

Collins was equally complimentary towards Mr. O’Day. When asked how it felt to be doing his show with a Seattle radio legend, he said, “It was amazing! He broke some of the most amazing talent from the 60’s and helped create what we are listening to today. A lot of bands back then influenced that are coming out today. He is an inspiration to me in a lot of ways. I think it was Pat’s passion that also helped create what he did at KJR back in the day.”

This special event brought out revered Seattle rock music critic and current Seattle Times contributor Gene Stout out to visit the JCS studios for the first time. When asked what prompted his visit Stout said, “Marco Collins and Pat O’Day are icons of Seattle Radio. Every kid and every teenager would listen to Pat and his show. He helped break bands like The Ventures. Marco was equally significant in the early 90’s when KNND came on line; it was just right for the time. It was a fun station to listen to at the time and Marco had a hand in so many bands that were on the radio at the station. It was an explosive period, we had to pinch ourselves – it was such an extraordinary time.”

For a newer generation have fans that may not have been alive during the various decades of the Seattle explosion, O’Day, Collins, and Ormsby treated fans to a virtual Seattle music history lesson and brilliant theater of the mind. And that, my friends, is what great radio is all about!

If you weren’t able to listen to Seattle Top Twenty Countdown, you can hear it on demand at jetcitystream.com. Check out the behind the scenes photos in the slideshow below.

Behind the Scenes at JCS: Marco Collins, Pat O’Day and Buck Ormsby (9/28/12) Photo By Greg Roth

Behind the Scenes at JCS: Gene Stout and Michael Raley (9/28/12) Photo By Greg Roth

Behind the Scenes at JCS: Marco Collins, Pat O’Day and Buck Ormsby (9/28/12) Photo By Greg Roth

Behind the Scenes at JCS: The Worlds Greatest Dog (9/28/12) Photo by Greg Roth

Behind the Scenes at JCS: Buck Ormsby Marco Collins and Pat O’Day (9/28/12) Photo By Greg Roth

Behind the Scenes at JCS: Shawn Stewart and Charlie (9/28/12) Photo By Greg Roth

Not only is he a multi-media journalist, he is also an accomplished musician. He is the founder of SMI and drives the creative look, feel and branding for the publication. His years of writing, arranging, and performing live music in a variety of genres inform his ability to communicate the message and the mechanics of music. Roth’s work on SMI reflects his philosophy that music is the universal language, and builds community. He believes it has the power to unite people of every race, religion, gender, and persuasion.
Related Items107.7 The EndJet City StreamKJR AMKNNDMarco CollinsNorthwest MusicPat O' DayRock n' Roll Hall of FameSeattle MusicSeattle Music Happenings
← Previous Story SMI Artist Spotlight: Whitney Monge puts personal revelations into her music
Next Story → Protosong.com gives music to give back