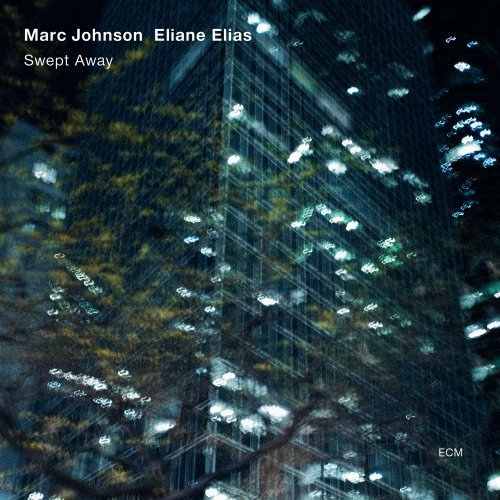 Not halfway into the first track, Swept Away resonates as a perfectly suitable title for this event, Marc Johnson’s first ECM album since 2005’s Shades of Jade. This time around, he shares the bill with one of today’s truly great pianists, Eliane Elias, a key collaborator for many years, and a musical companion who also happens to be his wife.  They’ve been together for 20 years, though Elias expresses the relationship could actually be valued at 85 years when accounting for the amount of time spent working side by side, traveling, and being married.  Both individuals exuded greatness from the moment they broke ground on their respective career foundations – Elias with Steps Ahead, and Johnson making history with the Bill Evans trio.  What thrives as a vibrant and hedonistic partnership continues to speak volumes about the current project, much of which was conceived in the beauty of their New York home in the Hamptons.

Structured around trio and quartet formats, the program benefits considerably from a chemistry shared between drummer Joey Baron and saxophonist Joe Lovano, as heard on Shades of Jade. Both musicians have history with Johnson dating back over 30 years, and make up a genuine consortium for this affair.  The compositions were allowed to fully take on the character of this natural setting, sculpting out of sound an atmosphere that suffuses the ear with a magnified sensitivity and fervor, and remains unencumbered by the contrasting, pristine complexion of the studio walls.  Engineer Joe Ferla returns to the fold as well, capturing the ambiance invoked by these sounds, and reveals with stunning clarity the scale and strata of the ensemble’s inner workings.

An abundance of ideas from both Marc and Eliane are in play on this effort, distributed evenly and finding their way onto the page in symbiotic fashion. While Shades of Jade offered an array of palatable arrangements that served as a schematic for inspiring directions in improvisation, Swept Away realizes the ultimate potential of what was initially proposed, shining a collective spotlight on the emotional core that burns inside of every piece.  The session is beautifully sequenced, flowing like a series of impressionistic portraits in a gallery, and beckons the listener to intimately study the process in a mode more laissez-faire.

Johnson’s hallmark for expanding the conventional role of accompanist continues to be a virtue, using the physical body and harmonic range of his instrument to illuminate a voice that literally sings through the bass.  The rare distinction given to his lyrical approach and interplay with Bill Evans’ piano emerges in a similar vein on the title track, as well as in songs like “Moments” and “Inside Her Old Music Box”, the latter of which features an arco solo that conveys its message poetically just as the composition comes into blossom.

Elias’ breathtaking pianism takes flight on “B is For Butterfly”, inspiring the spirit of Keith Jarrett’s American Quartet with her approach to voicing melodies and gospel-like turnaround phrases.  The solo to follow euphemistically echoes the title, and of its own volition crests with soaring momentum, summoning the band to navigate the waves like an Olympic sailing team.  The same intensity can be felt on “One Thousand and One Nights”, which by its conclusion becomes a rite of passage that finds the rhythm section bubbling underneath the piano like a newly activated volcano.  “Midnight Blue” presents another highlight – An appropriately tinted, blues-tinged theme carried by Lovano’s signature earthy tone, which leisurely caresses each note before finally releasing its passion into the room like sweet incense.  Baron’s drums define the space for this tune as he dives off the tallest peak of every melodic phrase, inciting ripples with each punctuation and cymbal splash.

The album is sweetly sealed by Johnson’s arrangement of the traditional folk song, “Shenandoah”, and like a fine digestive, casts a benevolent afterglow around an experience that relentlessly begs repeated listening. Not since Charlie Haden’s Quartet West has there arrived a band that can rouse such imagery and romanticism in the space of a single album, far and away making Swept Away one of 2012’s most essential listens, and a must-see group to catch by the end of this year.

In support of their new release, Marc Johnson and Eliane Elias will be appearing at Dimitriou’s Jazz Alley on Thursday, October 25th through Sunday, October 28th.

To find out more about ECM Records, please click on the logo below…

Not only is he a multi-media journalist, he is also an accomplished musician. He is the founder of SMI and drives the creative look, feel and branding for the publication. His years of writing, arranging, and performing live music in a variety of genres inform his ability to communicate the message and the mechanics of music. Roth’s work on SMI reflects his philosophy that music is the universal language, and builds community. He believes it has the power to unite people of every race, religion, gender, and persuasion.
Related ItemsDimitrious Jazz AlleyECM RecordsJazzJoe LavanoJoey BaronJonathan SindelmanMarc JohnsonSeattle Music Happenings
← Previous Story Live Review: Glen Hansard takes it to the streets of Seattle
Next Story → Macklemore & Ryan Lewis steal the number 1 slot on iTunes