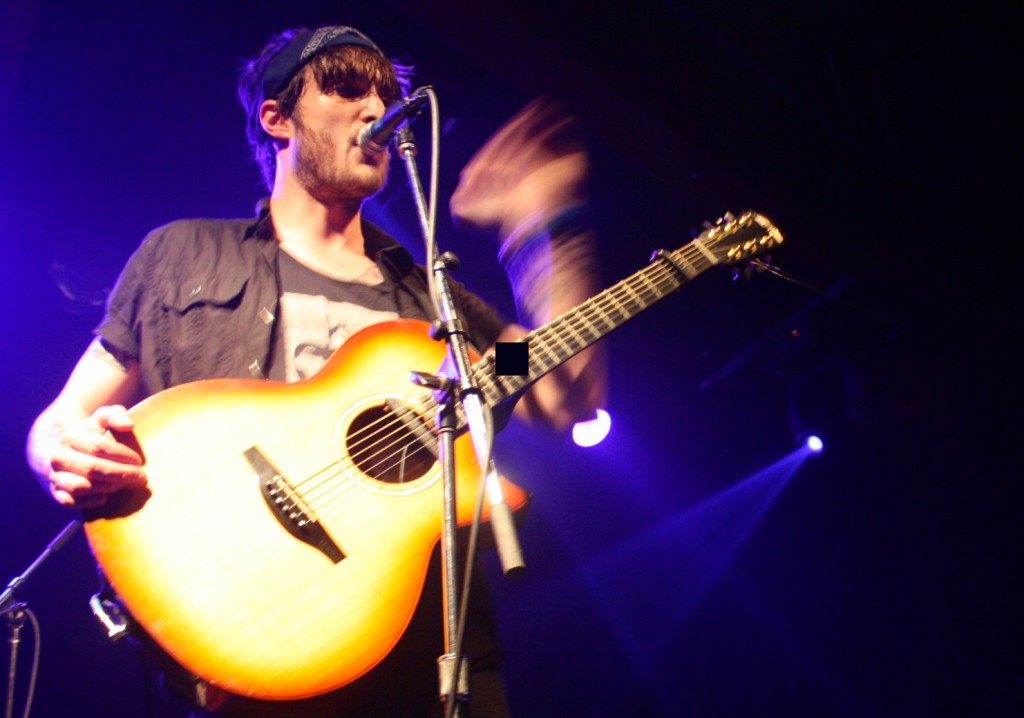 Chris Cunningham of Ravenna Woods (All Photos by Alina Shanin)

Land of Pines rocked the stage from the moment the five-piece group set up and plugged in. Great vibes and just the right amount audience interaction kept the show flowing smoothly, allowing the minor technical difficulty with Evan Easthope’s pickup to be overlooked.

The talent in this group is abundant, starting with the perfected drumming of Kyle Holland and ending with the always impressive vocal harmonies of Easthope and Kessiah Gordon. While the two switched off leading songs throughout the set, the best moments included both guitarists giving it their all on the mics.

Alex Miller and Spencer Miller (keys/percussion and bass, respectively) added their flavor to the upbeat indie rock sound the young band exuded with every note. At one point, Alex kicked off a song with electronic drums on his Korg workstation, further demonstrating the band’s ability to incorporate experimental aspects of music often feared by many.

As the set moved forward, so did the many bodies crowding the venue. Spectators bobbed heads and some jumped to the quick yet heavy guitar riffs and vibrating bass lines. Gordon’s solo during the last song is definitely worth mentioning. She’s one of few local female performers that has the voice to match her precise and enticing guitar playing.

Everyone in the group enjoyed the audience’s response and were pleased with the show. “I only have positive things to say,” said Gordon, explaining that she had to fight off jet-lag during the set.

“I could not have asked for more,” said Holland. “The best part was working off the crowd’s energy.”

Land of Pines is scheduled to release a new EP early next year, so check out landofpines.com for updates and downloads.

Cody Beebe & The Crooks followed Land of Pines, and energized the audience in a whole new way. Beebe’s gritty vocals and amazing stage presence rocked the venue as the audience shrieked and applauded between songs. Although drummer Chris Green was busy enjoying his honeymoon, the band rocked on without missing a beat, with Drew Fletcher taking over the throne for the night. Fletcher braved the stage after just a couple of rehearsals, which was apparently enough for this talented musician to master the songs.

The intoxicating energy engaged the cheerful crowd as Beebe showed off his skills on the screaming Gibson, with vocals and stage presence resembling a true rock star. Joe Catron wasn’t far behind the frontman, hand-drumming with intensity and precision, surprisingly leaving his hands intact by the end of the set. Bassist Eric Miller and keyboardist Aaron Myers added their own flavor to the grungy rock, making Cody Beebe & The Crooks one of the most memorable rock ensembles in the Northwest.

Like bands before them, Beebe was grateful for all the support and enjoyed the crowd immensely.

Headliner Ravenna Woods put yet another spin on the vast genre, bringing acoustics and punk rock together flawlessly. Guitarist and vocalist, Chris Cunningham, definitely stood out in the four-piece group, stepping it up a level on the energy meter. His ability to shred on his acoustic while jumping to and from the mic without missing a lyric was impressive to watch. His voice, however, was probably his best attribute.

Ravenna Woods is more about the feel of the music, with interesting twists and and unexpected sound effects, courtesy of Brantley Duke and Sam Miller. While influences of Radiohead and Modest Mouse are present, the band has established its own distinct sound that keeps the audience coming back for more.

Everything was interesting about Ravenna Woods, including the setup of Matt Badger’s drums set, featuring the crash cymbal in the middle. At one point in the set, a floor tom got passed around the stage, giving Cunningham a chance to get in touch with his percussionist side.

After clearing the stage, Cunningham couldn’t have been more pleased with the show and his ability to hide the nerves. “It was the best show I’ve played all year,” he said, adding “The crowd was amazing.”

The audience ate up whatever The Crocodile served, sincerely thanking the performers with applause and supportive screams. The venue’s sound system was great as always, allowing the bands to concentrate on their performances without a worry. Everyone’s hard work paid off, making last Friday night an absolute success for City Arts Festival 2012.

Not only is he a multi-media journalist, he is also an accomplished musician. He is the founder of SMI and drives the creative look, feel and branding for the publication. His years of writing, arranging, and performing live music in a variety of genres inform his ability to communicate the message and the mechanics of music. Roth’s work on SMI reflects his philosophy that music is the universal language, and builds community. He believes it has the power to unite people of every race, religion, gender, and persuasion.
Related ItemsAlina ShaninCity Arts FestivalCody Beebe & The CrooksLand of PinesRavenna WoodsSeattle Music HappeningsThe CrocodileThe Swearengens
← Previous Story Seattle Living Room Shows and Melodic Caring Project’s October surprise (Photo Slideshow)
Next Story → SMI Radio Ep. 71 On Demand: Torches and Jason Friendt of RockStar Motel