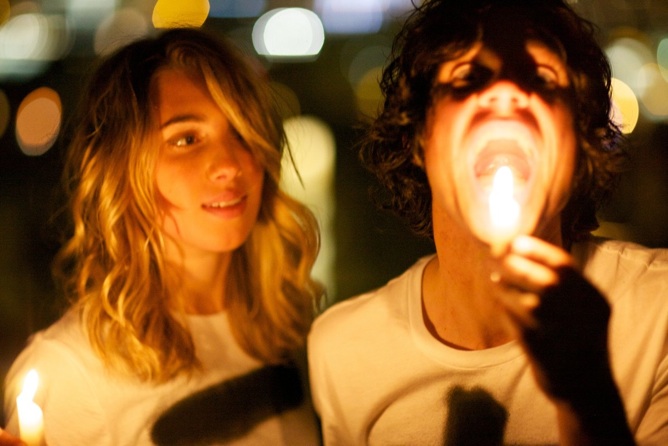 Electronic pop duo Daydream Vacation creates infectious beats and textures – courtesy of singer, guitarist, keyboardist, and producer Dave Einmo (Head Like a Kite)  and drummer Nat Damm (Akimbo and Sandrider). With the sweet and etherial vocal styling of Asy de Saavedra (Chaos Chaos formally Smoosh) soaring over the top, you have all of the ingredients needed make a delicious musical confection.

The group has offered up a brand new piece of ear candy for fans to savor. They just dropped their newest single, The Mirage yesterday on iTunes and Amazon.com. In addition, Daydream Vacation will be playing a special show at The Vera Project on Friday, November 30th along with Seven Dials. Asy and Dave will be our guests on SMI Radio the week of the show. Tickets for the performance are available for purchase here.

In the meantime, you can enjoy the new single by clicking on the player below.

A rural barn in Sweden may seem like an unlikely birthplace for the electronic dance anthems that fuel Daydream Vacation. However, it was in the fields of Scandinavia that Asya of Smoosh recorded vocal ideas, while Head Like a Kite mastermind, David Einmo, created the beats thousands of miles away in Seattle. Skyping the ideas back and forth over the Atlantic via the Internet, the duo crafted the electronic dance party that became Daydream Vacation, with Asya on vocals and David laying down the beats and acting as producer/mad scientist. Read the rest of the band’s bio here.

Not only is he a multi-media journalist, he is also an accomplished musician. He is the founder of SMI and drives the creative look, feel and branding for the publication. His years of writing, arranging, and performing live music in a variety of genres inform his ability to communicate the message and the mechanics of music. Roth’s work on SMI reflects his philosophy that music is the universal language, and builds community. He believes it has the power to unite people of every race, religion, gender, and persuasion.
Related ItemsAmazon.comDaydream VacationHead Like a KiteiTunesSeattle Music HappeningsSeven DielsSMI RadioSmoosh
← Previous Story Live Review: Neil Young and Crazy Horse show no rust at Key Arena
Next Story → SMI Radio Ep. 74 On Demand: Brent Amaker and Lukas Nelson (Photos)