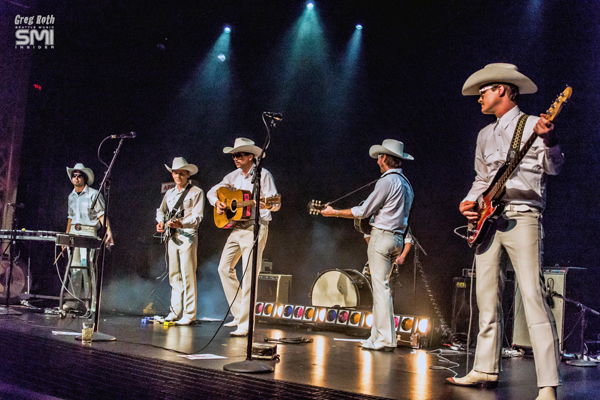 For those who have never seen Brent Amaker and The Rodeo live, it is difficult to explain. You have to experience a show to really get it. Amaker and his band combine elements of Broadway, Vegas, and vaudeville to drive their musical point home. Last Wednesday night’s performance at The Triple Door was part music concert, part performance art, with a hint of kitsch and burlesque thrown in the mix. It could be said that Amaker’s show is a love letter to a pure American art form, and unique brand of pop culture.

Amaker and the band owe as much of their sound to the likes of Devo, Kraftwerk, and Bowie as they do to Willie Nelson and Johnny Cash. As far as the visual aspect of their show… let’s just say they look like they could easily have been the house band in a Clint Eastwood spaghetti western or stepped off of the set of a Quentin Tarantino film.

Welcome to the Rodeo…

Prior to the start of the music portion, fans were treated to an exclusive preview of the band’s newest video of the single, Country Sky. The song will be on the band’s forthcoming album, Year of The Dragon, coming out in early 2013. Brent and the band performed the number live later on in the set.

Decked out in their white cowboy outfits, Brent Amaker and his Rodeo showed that behind the quirk and fun they’re a solid outfit. At the start of their set, the band, consisting of Bryan Crawford (drums), Cinderella (bass), Ben Strehle (guitar), Tiny Dancer (guitar) and Jaques Willis (vibes and percussion) took their positions on stage and launched into their standard opening number Welcome to the Rodeo. Donning a red cape and accompanied by his vivacious valet Bunny (Atomic Bombshells), Amaker sauntered through the crowd  and made his way to the stage. Like Danny Ray did for James Brown many times, Bunny took off Amaker’s cape. ONly then did Amaker strap on his ax and take fans on a wild horseback ride through their roots-country and hillbilly cow-punk catalogue. (setlist below) 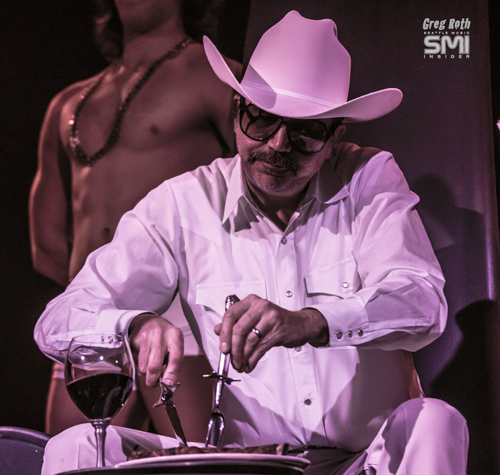 One of the musical highlights was a spirited and countrified version of Kraftwerk’s classic, Pocket Calculator, which came complete with lightly choreographed, robotic moves. But the real showstopper came during The Rodeo’s rendition of Time to Set Things Straight. In what had to be one of the coolest and quirkiest pieces of panache, Amaker walked out to the center of stage, accompanied by the scantily clad Bunny, while two fit background dancers named Trojan and Paris stood guard. Amaker then proceeded to sit down on a stylish chair and treat himself to a rare rib-eye steak and a nice glass of red wine. (I’ve seen a lot of shows through the years, but I reckon that has to be a first.) In between bites, Bunny provided Amaker with an embroidered towel, which the singer used throughout his meal. Cowboys eat meat, but real cowboys eat it in the middle of their set while the band plays on. (Let’s hope he saved some room for some Thanksgiving Day turkey.)

After Amaker and the band finished thier 19 song set, Bunny came back out and draped our hero in his red cape and he strode off into the sunset, er… off the stage, through the crowd and out of the theater.. cut and print.

The Triple Door proved to be the perfect setting for Amaker and the Rodeo’s visually stimulating and sonically brilliant performance. Kay Kay and His Weathered Underground put on a smooth and soulful set, consisting of a lot of newer material prior to Amaker’s set. Vox Mod’s electronic sound (complete with visuals flashed on the big screen) provided some great warm up and (in-between set) music which provided a nice musical flow throughout. (See photo slideshow below.)

With tongue firmly planted in cheek, Brent and company know how to bring the fun and put together a highly engaging and entertaining product. It was a perfect lead-in for a four-day Thanksgiving weekend. If you missed the show, Brent Amaker and The Rodeo will be back in town to play a special New Years show at The Crocodile.

You can follow Brent and his band on RockStar Motel.

Not only is he a multi-media journalist, he is also an accomplished musician. He is the founder of SMI and drives the creative look, feel and branding for the publication. His years of writing, arranging, and performing live music in a variety of genres inform his ability to communicate the message and the mechanics of music. Roth’s work on SMI reflects his philosophy that music is the universal language, and builds community. He believes it has the power to unite people of every race, religion, gender, and persuasion.
Related ItemsAtomic BombshellsBrent Amaker and The RodeoDevoKay Kay and His Weathered UndergroundKraftwerkSeattle Music HappeningsThe Triple DoorVox Mod
← Previous Story Giving thanks to Seattle Living Room Shows & Melodic Caring Project (Photo Slideshow)
Next Story → Bear Cove, Aaron Daniel and Blake Noble plunge in at High Dive (Photo Slideshow)