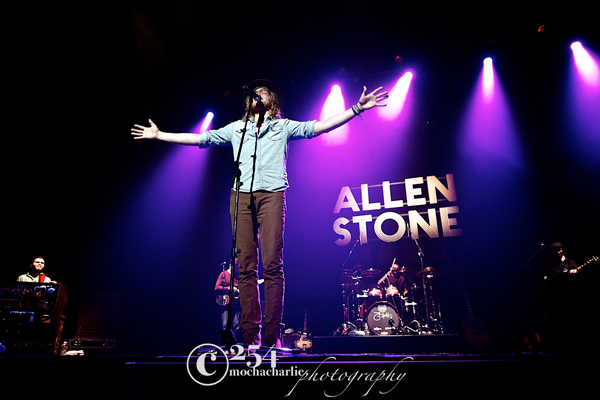 Allen Stone at The Paramount (All photos by Mocha Charlie)

I remember seeing Allen Stone when he performed back in 2010 in a living room for 15 people. Last night, the local and now national sensation played a sold out show at The Paramount in downtown Seattle. After a whirlwind world tour that began August 31, 2012, Allen and his band returned home to play in front of friends, old and new, and they brought the house to their feet! (Stone’s last appearances in the Seattle took place at and Capitol Hill Block Party and Easy Street Records.)

At The Paramount, Stone stopped the show at one point, splitting the crowd in 1/2 and demanding that everyone “get funky” and the crowd, all the way to the balcony, got up and danced. With 300-plus shows under his belt this past year alone, including opening for the legendary Al Green, his vocals haven’t faltered. On the contrary, Stone seems to grow stronger and more soulful with each performance.

He’s performed with his musical hero, Daryl Hall, on Live From Daryl’s House, Last Call With Carson Daly, on The Late Show with David Letterman, Jimmy Kimmel, and Conan – not to mention Greg Roth and SMI Radio last February. This Tuesday (12-11), he’ll be   performing on The Tonight Show with Jay Leno (set your DVRs!)

This son of a preacher man is going for it, BIG TIME, and I am proud to say I remember him when. He will continue to perform through the first of the year, with yet another (potential) US tour planned for fall of 2013. If you still have yet to see him perform LIVE, you should probably bookmark his website http://www.allenstone.com/ and mark your calendars once the dates are announced.

Also on the bill with Alan was Chokolate and Lemolo. You can read all about it and see photos from the show by clicking the link below…

Last week, The Artists Den, producers of acclaimed public television program, Live from the Artists Den, released an incredible acoustic session featuring Allen Stone. The performance is part of their new Spotlight series, highlighting the best up-and-coming artists around the world. Check out the video below…

Mocha Charlie is an amazing photographer who has a real passion for music. She covers and shoots several shows per month in and around the region. She a brilliant photo journalist but most importantly, she is also a mother who does her best to balance out her life and live it to the fullest. Mocha Charlie uses her passion and talent to support the community, her friends and family any way that she can.
Related ItemsAllen StoneSeattle Music HappeningsThe ParamountThe Paramount Theatre
← Previous Story Glen Campbell’s long goodbye to Seattle
Next Story → A double delight of Lemolo and Choklate at The Paramount (Photo Slideshow)