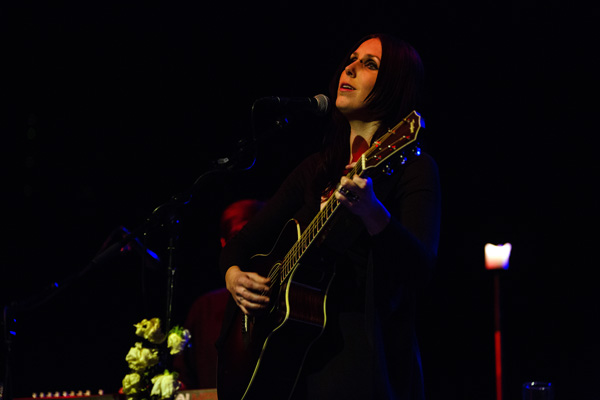 by Mat Hayward with Jennifer Austin

King Dude put on a solid, though somber, performance at The Triple Door. The bleak scene was set with a tattered, almost black American flag framed by two candles.  Moody, dark lighting added to the gloom.

Although T.J. Cowgill showed real vocal strength and the King Dude performance was well-received by the crowd, songs about Lucifer turned me off. After snapping a few photos, my mind was pretty closed, so I went upstairs to the Musicquarium Lounge for a glass of wine.

Chelsea Wolfe was up next, and in a confusing transition, she came out to help set up the stage. Even though it was clear the show wasn’t starting yet, some people applauded.  Wolfe placed the set lists, walked off stage, and then returned a few minutes later with her violinist and keyboard player to perform. There was a feeling of uncertainty…was it starting this time?  It was a weird beginning – it felt almost uncomfortable.

When Chelsea finally started singing, it was mesmerizing.  Calling her ethereal would be a bit cliche, because that was clearly what she was going for.  But ‘ethereal’ doesn’t quite capture her underlying hint of darkness. Sweet and slightly spooky is closer.

During the first song, the stage lights were about as low as you can get in the Triple Door.  She asked for the lights to be dropped even lower for the second song.  It created an eerie effect that made her appear as if she were glowing red in the dark.  For photographers, it’s a bit of a nightmare, but for concert-goers, it was pretty cool.  Usually, when there’s a quiet show at the Triple Door, you can hear some crowd chatter and the occasional fork clanking on a plate.  Not so this time – you couldn’t hear a peep.

After her performance, Wolfe exited to polite applause, followed by silence.  She came back on the stage a few minutes later, unsure if the audience wanted to hear an encore. At first, it seemed like the crowd was disengaged, but it became clear that they were simply mesmerized by her performance. Wolfe’s humble response endeared her even more to the crowd, who broke the silence with even more applause…a fitting end to a somewhat haunting musical display. 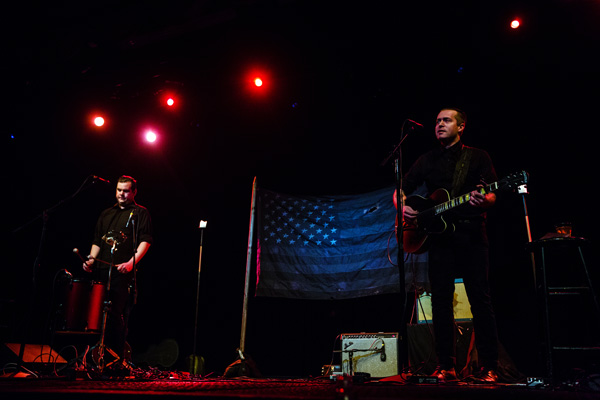 Not only is he a multi-media journalist, he is also an accomplished musician. He is the founder of SMI and drives the creative look, feel and branding for the publication. His years of writing, arranging, and performing live music in a variety of genres inform his ability to communicate the message and the mechanics of music. Roth’s work on SMI reflects his philosophy that music is the universal language, and builds community. He believes it has the power to unite people of every race, religion, gender, and persuasion.
Related ItemsChelsea WolfeJennifer AustinKing DudeMat HaywardSeattle Live MusicSeattle Music HappeningsThe Triple Door
← Previous Story SMI Radio Ep. 80 On Demand: Mary Lambert & The Local Strangers
Next Story → SMI Radio Ep. 81 On Demand: Zarni & Andrea Desmond