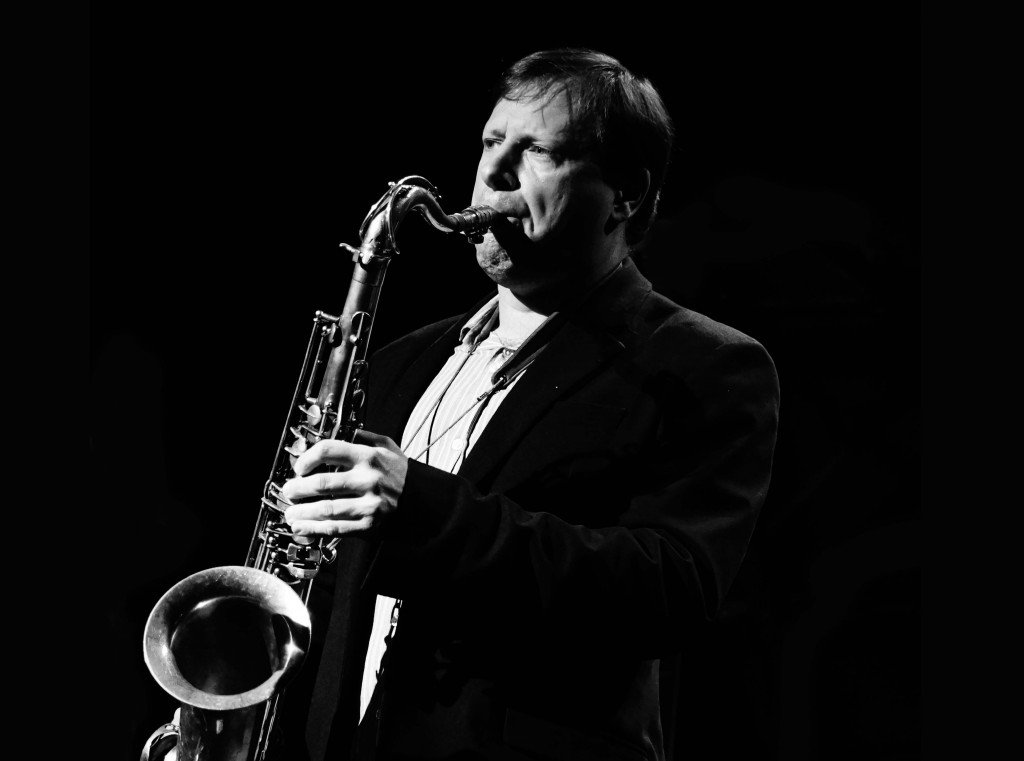 For as many times as the present-day saxophone colossus Chris Potter frequented Seattle over the years while on the road with artists like Dave Holland, Dave Douglas and Pat Metheny, it was only last week that he pulled up reigns at Dimitriou’s Jazz Alley to front his own band, hosting an affair for what most any witness would attest to as a shining moment in the history of jazz.

While it may appear that Chris has reached a peak in activity with the culmination of with his ECM album debut, The Sirens, his recent trajectory could be described as a process of steadily unraveling layer upon layer of beauty in service to an instrument cloaked in mystery – one that now finds its way to an audience beneath the wings of exploration, departing and returning each time with new clues found in questions posed by only a select few masters of the music.

The Sirens sounds every bit as mythical and timeless as the work that inspired it – Homer’s epic poem, The Odyssey. It remains one of few ancient texts to boldly address the human condition in the context of a world defined by good and evil, love and betrayal, as well as an individual’s ongoing struggle to abide by a righteous path in the face of psychological peril and seduction.  After revisiting the work, Potter found it to be resonant with our modern times, compelling him to produce a series of sketches which draw upon the strengths of the moods that surround dilemmas confronting Odysseus.

The title track on The Sirens holds a captivating reference to the sound of John Coltrane, though it remains the collective statement of all that truly personifies the nature and capabilities of this quartet.  Within the medium of recordings, it’s exceptionally rare to be given a glimpse of an artist’s imagination, to see it realized and then revealed almost instantly. Potter’s quiet confidence in leadership is underscored by an open-ended approach to the compositions, as the musicians chosen for this project bring an omniscient quality to the interplay that unfolds, providing a degree of insight into the economy of space and time, not unlike the great Coltrane quartet of the 60s.  In a live setting, the combined experience, technical skill, and creative thrust propelling this unit is simply one of the most exhilarating and restorative trips one could ever hope to take while sitting down.

Pianist David Virelles brings a pronounced Cuban sensibility to his craft with an unconventional approach to textures on his instrument, and largely defined by a physical touch that covers a broad range of percussive colors.  Over the recent past, he has rapidly emerged as one of the most distinctive voices around, touring and recording with Chris Potter, Ravi Coltrane, Tomasz Stańko, and making significant waves with the release of his second album, Continuum (Pi Recordings).

Larry Grenadier has long established himself as one of the music’s great proponents on the bass, with a singular voice and tone that has provided the anchor for bands led by Brad Mehldau, Pat Metheny, Charles Lloyd, and Paul Motian, to name a few.  The sharpness of his communication on stage, and steadfast ability to be an immensely flexible listener, strikes a perfect balance with his own expression as an artist, placing him in the sparse company of greats such as Scott LaFaro, Gary Peacock and Marc Johnson.

Eric Harland’s impact on the drums can hardly be measured, as he continues to leave audiences breathless with a sound and vocabulary that resembles no other before him.  Perhaps best known for his contributions to a number of Charles Lloyd’s projects spanning the past decade, he has also collaborated with some of this music’s most celebrated innovators, including Betty Carter, Joe Henderson, Michael Brecker, McCoy Tyner, and Zakir Hussain.  In Downbeat’s 65th Annual Reader’s Poll, he was included on a short list of the world’s most recognized drummers, alongside legends Roy Haynes and Elvin Jones.

For the west coast leg of the tour, we had the unique benefit of seeing the ensemble as originally heard on The Sirens (with the exception of Craig Taborn, one of the two pianists featured), with the material presented from an entirely new perspective and stage of development.  Among the evening’s highlights was the song Wayfinder, where we observed Potter scrolling through an extensive commentary on bass clarinet and tenor saxophone, demonstrating his complete range and control on both instruments while showcasing a signature muscularity and dexterity.  The tenor solo developed from a brand of conversational lyricism reminiscent of Sonny Rollins, greeting the ear as if he was speaking directly through the horn.

By contrast, The Owl of Cranston, a composition by the late Paul Motian, finds the group shifting into a mood that resembled a new expression of Third Stream jazz, interlaced with themes inspired by the Impressionist movement in classical music.  What begins with an arresting soprano solo further underlines Chris’ insatiable thirst for harnessing the complete range of the instrument, unraveling brilliant melodies from within an expanded harmonic structure.  The group follows this lavish introduction by entering punctually and then immediately throwing the curtain wide, embodying the spirit of an orchestra.  Each individual did his part to brilliantly layer the theme with countermelodies while retaining a state of independence, as Virelles would at times morph into the role of harpist, while Grenadier’s bass vocalized verses with the romance and rhythm of a poet.

The opening to Kalypso had Harland lying down a firm back beat framed by delicate cymbal work, and accented by a shimmering high hat that invoked the spirit of Ed Blackwell.   What followed promptly transformed the piece into a warp drive rollercoaster ride in post-bop eclecticism.  Signposts along the way came in the form of melodic structures that would turn on a dime and spark with each rhythmic stop, with flavors reminiscent of Ornette Coleman’s great quartet of the late 50s and early 60s, salt and peppered with a savory Michael Brecker quartet of the latter 90s.  Virelles’ piano responds in kind, swinging into even deeper waters and channeling concepts that in the space of a single solo became a living tribute to chieftains Tommy Flanagan, Thelonious Monk, Randy Weston, and Tete Montoliu.

Once we thought this multi-course feast was about to wind down, the band returned to deliver one encore, launching into a high-octane rendition of The Police’s Synchronicity I.  The temperature in the room was suddenly elevated by a blistering piano solo from Virelles, but it was Harland’s solo that vigorously took hold, drawing the journey to conclusion with a soulful, mind-altering dissertation that literally pushed sound out of the drums, the effects of which suspended all surrounding motion and activity.  Silence could never have tasted any sweeter as we looked on in amazement to behold this mechanical marvel slow to a halt as if he were a Great Western locomotive.

With yet another chapter in the odyssey of Chris Potter being written and chronicled, and with numerous projects already in the hopper that will extend through 2014, it’s highly unlikely that we will see any indication of a decline in altitude from this brilliant mind – a man who has persisted to great lengths in seeing that the future of this music remains intact. 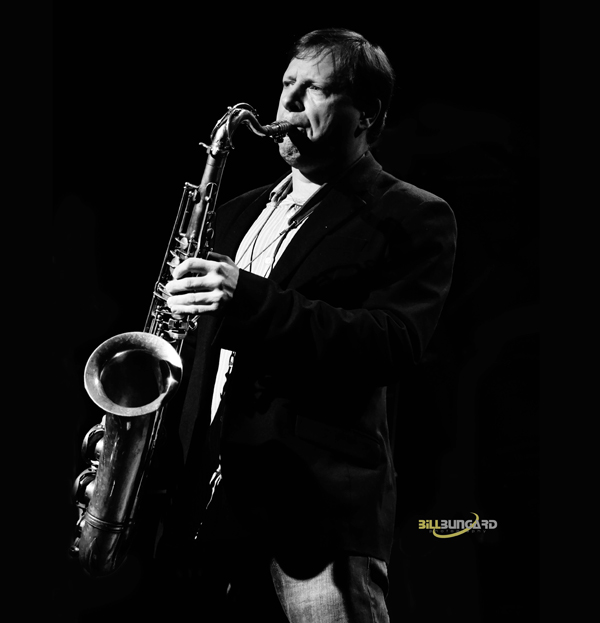 Not only is he a multi-media journalist, he is also an accomplished musician. He is the founder of SMI and drives the creative look, feel and branding for the publication. His years of writing, arranging, and performing live music in a variety of genres inform his ability to communicate the message and the mechanics of music. Roth’s work on SMI reflects his philosophy that music is the universal language, and builds community. He believes it has the power to unite people of every race, religion, gender, and persuasion.
Related ItemsBill BungardChris PotterDimitrou's Jazz AlleyJazzJonathan SidelmenSeattle Music Happenings
← Previous Story SMI Artist Spotlight: Dead Winter Carpenters in Seattle (Audio Interview & Photo Slideshow)
Next Story → On the trail to SXSW with Fox and The Law