On the trail to SXSW with Fox and The Law 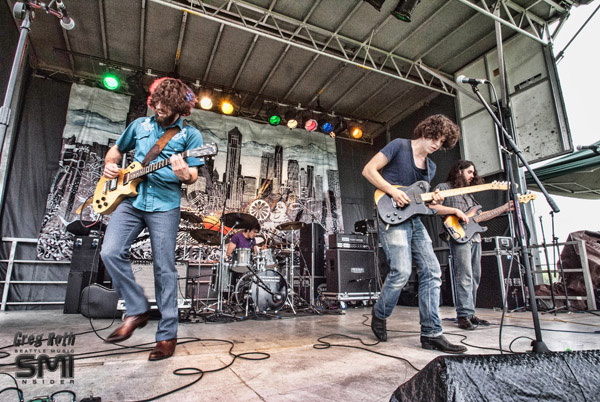 Fox and The Law (Photo by Greg Roth)

Since I learned what it was, I vowed to avoid office work like herpes. In high school, I started considering alternative careers. In college, I decided on writing novels. Psychedelics might’ve been involved. In any event, all it would take was one best-seller for zero nine to five. I liked that math.

After I graduated and celebrated, and I sat down to bang out the next Don Quixote. That was January of 2012. These things take time, creative process, yada yada yada. I ended up working behind a desk at a local tech company. Lucky for me, I work on the same floor as Guy Keltner, frontman of local rock quartet Fox and The Law. https://soundcloud.com/user7886762

Word around the water cooler was they were gearing up for a tour to promote their new EP, Sleep with the Lights On, and I wanted in. The tour will take them down to California and then east to Austin just in time for the annual music/film/interactive freak-fest, South by Southwest. I heard the stories from last year (including showing up scheduled for three shows and hustling their way into eight, Guy blacking out and waking up in handcuffs, and the band attending a party with a phantom crowd-pooper). With the waves they’ve been making since then, it’s clear that this year’s endeavor would be an adventure worth chronicling.

If you haven’t heard of FaTL, I suggest you look them up. Like, now. Their blend of blues-driven garage rock and babymakin’ funk is worth the five second iTunes/SoundCloud/Spotify/Google search. Go ahead and look, I’ll wait. Your search may only take a few seconds, but that storm in a whiskey bottle that awaits you has been tamed after countless hours of rehearsals. “We practice in the basement almost every day,” says bassist Patrick Dougherty, referring to the laundry room/DIY recording studio set up in Guy’s basement. “If we’re not playing, it’s because one of us has to work [our day job].You live here, you’ve seen us at it.”

Oh yeah, backstory: Guy currently shares a house with yours truly and Ryan Granger of the Grizzled Mighty. Fun fact: The Grizzled Mighty and Fox and The Law currently share the basement and rehearse with the same equipment. Back in January, Neumos posted photos of The Grizzled Mighty ’s practice space on their website to promote the Grizz’s show on the 31st, and you can clearly see the black Fox and The Law logo stenciled on a box in the background. At the time of writing this article, those photos are still up. How’s that for cross-promotion?

Back to Fox and The Law: what’s almost equally as interesting as their music is the way they do business. Like most musicians, these guys’ve got shallow pockets, but they still manage to bang with their bucks. Take their new music video for the EP’s title track, Sleep With the Lights On. Patrick wrote the script for a boxing match between Granger and FaTL lead guitarist Peter Williams. They hired a local director and filmed it at our house with two show lights and a camera mounted on a monopod made with steel pipe. Extras were cast with a Facebook event and paid with a keg and a pile of banh-mi sandwiches. The venture was like good Mexican food: cheap, simple ingredients that come together with satisfying flavor.

Of course, even the best Mexican food can go south quickly. Apparently, a mob of tipsy amateur actors and actresses are hard to direct. Halfway through shooting, the only way we could keep their attention was by fist pumping and chanting “Blood sport! Blood sport! Blood sport!” Possibly taking the chanting as a cue, Granger (an ex-boxer) decided to go method actor during the fight, and filming had to stop on several occasions so we could mop the blood drizzling all over our floor. (You don’t wanna let blood set, or else it never comes out.)

Bottom line, this band drips DIY like Peter dripped nose-blood that night. And if they’re not at a show, playing a show, rehearsing for a show, flyering, wheat-pasting, or shirt-making, the tireless members of Fox and The Law relax by hosting Saturday night/Sunday morning jam sessions in their studio. These guys don’t let up. They’re anecdote factories – journalistic pay dirt. That’s why I’m touring the Southwest with these lunatics and that’s why you’re coming with me. From the predawn drive down the I-5, to our midnight return, I’ll be blogging the daily exploits of the rock party ambassadors, Fox and The Law. See you on the road.

Not only is he a multi-media journalist, he is also an accomplished musician. He is the founder of SMI and drives the creative look, feel and branding for the publication. His years of writing, arranging, and performing live music in a variety of genres inform his ability to communicate the message and the mechanics of music. Roth’s work on SMI reflects his philosophy that music is the universal language, and builds community. He believes it has the power to unite people of every race, religion, gender, and persuasion.
Related ItemsDerek AubertFox and The LawSeattle Music HappeningsSouth by SouthwestSXSW
← Previous Story Live Review: Chris Potter’s modern-day odyssey in jazz (Photo Slideshow)
Next Story → SMI Radio Ep. 85 On Demand: Critical Sun Recordings 2013 SXSW Special