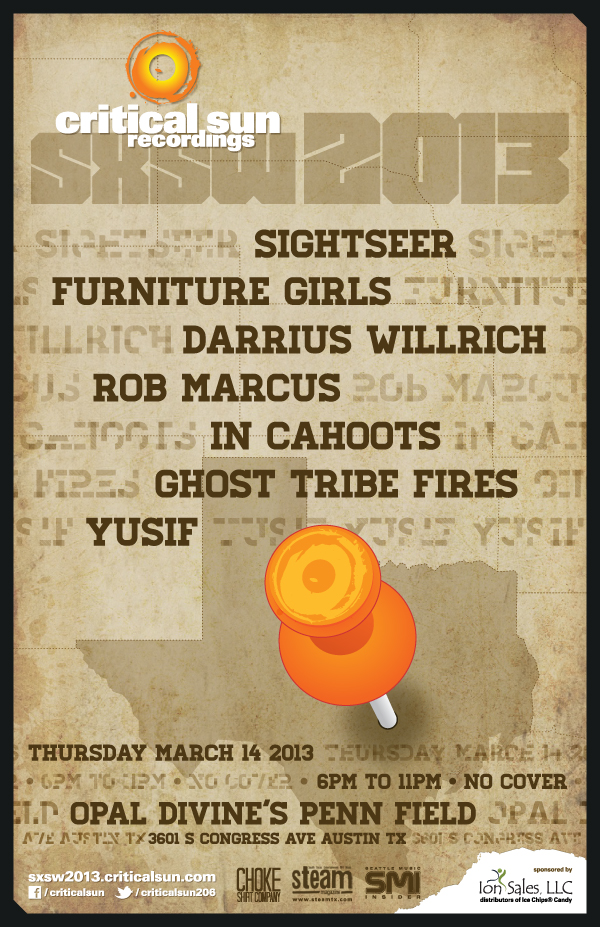 Critical Sun Recordings is heading back to Austin, Texas and South by Southwest. This year, Critical Sun will be hosting the only unofficial SXSW showcase featuring a lineup comprised solely of bands from Seattle.

On this week’s episode of SMI Radio, members from the participating bands pop by the studio to talk about SXSW and play tracks from the Critical Sun 2013 SXSW Compilation CD.  (To listen or download scroll down below.)

Critical Sun artists taking part in this year’s showcase are:

Sightseer (www.sightseermusic.com)
This female-fronted rock/alt-country band continues to build on a successful 2012 that saw the release of their critically acclaimed debut, a full length album entitled What Tomorrow Brings. They’ll arrive at SXSW with a collection of songs from their forthcoming second album, set for release this spring.

Furniture Girls (www.furnituregirls.com)
This will be Furniture Girls’ third trip to SXSW. This time out, the band will be touring to Austin, Portland, Eureka, San Francisco, and L.A., followed by stops in Wichita and Denver. In addition to their appearance at the showcase, Furniture Girls will also perform at Heart of Texas Rockfest on Wednesday, March 13th. Their sophomore album, Dreams and Chaos, will be released this spring.

Darrius Willrich (www.darriuswillrich.com)
Darrius makes his second appearance at SXSW this year. He is currently working on a new collection of songs for release in 2013, as well as a jazz album with bassist Evan Flory-Barnes and drummer D’Vonne Lewis. Darrius will also tour nationally and internationally in partnership with CJC Music Associates and Critical Sun Recordings.

In Cahoots (www.incahootsband.com)
In Cahoots is finishing their EP, due out in early March. Their single, Secret Handshake, is currently in rotation on terrestrial and internet radio stations. In addition to their appearance at SXSW, the band will hit the road on a West Coast tour through Portland, San Francisco, Oakland, Sacramento and L.A.

Ghost Tribe Fires (www.ghosttribefires.com)
Ghost Tribe Fires is an alternative, groove-based rock band currently working with producer Bubba Jones on We Don’t Belong, their debut EP release for Critical Sun Recordings. The band makes its first national appearance at Critical Sun at SXSW 2013 and will set out later this spring, touring with label mates, In Cahoots.

Rob Marcus (www.robmarcus.com)
Acoustic singer-songwriter Rob Marcus is going out this spring with acoustic pop-rock duo, Yusif, for a one-month tour beginning in Austin. With multiple stops along the West Coast and in the Southwest, Marcus’ blend of funky acoustic music and soulful vocals is sure to leave a mark.

Yusif (www.yusifmusic.com)
Yusif spent most of 2012 touring 30 of the 50 United States. He played over 75 shows in 4 months, with features at indieonthemove.com and The Huffington Post. Another month-long tour is in the works with Critical Sun artist Rob Marcus. A European tour is also on the horizon, scheduled for mid to late 2013. A new limited edition EP will be released this year as well, with a second full length due before year’s end.

Other northwest artists appearing at SXSW 2013 include:

Not only is he a multi-media journalist, he is also an accomplished musician. He is the founder of SMI and drives the creative look, feel and branding for the publication. His years of writing, arranging, and performing live music in a variety of genres inform his ability to communicate the message and the mechanics of music. Roth’s work on SMI reflects his philosophy that music is the universal language, and builds community. He believes it has the power to unite people of every race, religion, gender, and persuasion.
Related ItemsBubba JonesCritical Sun RecordingsDarius Willrich YusifFurniture GirlsGhost TribeIn CahootsSeattle Music HappeningsSightseerSMI RadioSouth by SouthwestSXSW
← Previous Story On the trail to SXSW with Fox and The Law
Next Story → Fox and The Law kick off Spring Tour at Neumos