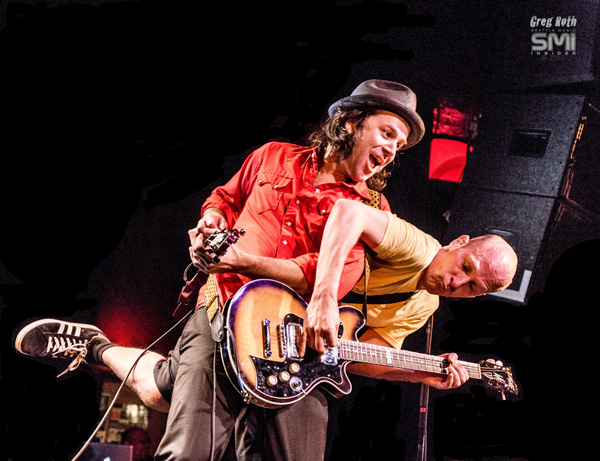 Nothing says fun on a Presidents’ Day weekend like Saturday / Sunday music double-header with those wacky power pop rock cats, The Presidents of the United States of America and the eclectic Campfire Ok. Throw in Aaron Daniel’s One Man Banned and Godfrey Daniels and his red Balloon, and you have the makings of a very engaging and energetic show.

PUSA Fest has become a welcomed Presidents’ Day weekend tradition for longtime followers of the band, and for younger fans, a sort of right of passage. The Sunday show at the sold-out Showbox at The Market was a family friendly affair, with some parents treating their kids to a Presidents show for the very first time.

The show opened with a brilliant set from Campfire Ok. They’re another Seattle band that crafts great records, but takes their sound and intensity to a whole new level live. They played several cuts from their newest EP, When You Have Arrived, and the audience loved every minute. Campfire Ok’s tribal and celebratory sound filled every inch of the venue. They have a unique style and solid chops to match.

The recent addition of Zarni DeWet on piano and vocals gives the band an added dimension. Her vocal style is a great fit with Mycle Cohen’s tenor. The solid rhythm section of  Brandon Miller on percussion and Aaron Huffman on bass provided a solid foundation. Andrew Eckes, who toggled back and forth between guitar, trumpet and electric banjo added some unique spice to their eclectic blend of rock, pop, folk, and world music.

Judging by the number of people flocking to the merch table after the set, lots of people who weren’t familiar with Campfire Ok became converts.

Next, Aaron Daniels and his One Man Banned performed a very sonically interesting set, incorporating keyboards, samples, guitar, drum machine, harmonizer and whatever else he had at is disposal to make strange sounds and melodies.

After Daniels set was the appearance of a visually odd, yet appealing Godfrey Daniels and his Red Ballon. (Godfrey Daniel? Geoffrey Daniel? Are they siblings, or alter egos of each other?) He’s best described as a larger-than-life-size doll clown who plays with a big red ballon. Honestly, it really defies explanation. You just have to see it, so check out this link.

Last up was the beloved PUSA – a band that rocks hard with catchy and silly songs, with tongue firmly planted in cheek.

Frontman and rock court jester, Chris Ballew, decked out in his trademark yellow T-shirt, ankle socks, and Adidas, was his animated self moving across the stage like a Tasmanian devil, delivering one PUSA classic after another, with little dead air between songs.

It’s always a hoot to see Ballew and Andrew McKeag play each other’s instruments in mid-song without missing a lick, while Jason Finn sits behind his kit pounding the skins with impunity. (I wonder how many sticks he goes through per set.)

A wise person once told me, “If the audience sees that you are having fun they will have fun right along with you.”  It’s a good summary for a PUSA show, because the audience was certainly having a ball.

These cats are play with crazy passion –  that’s why we love ’em. And that’s why we come back every year to celebrate Presidents’ Day with The Presidents of the USA. It really is the only way to do it right! 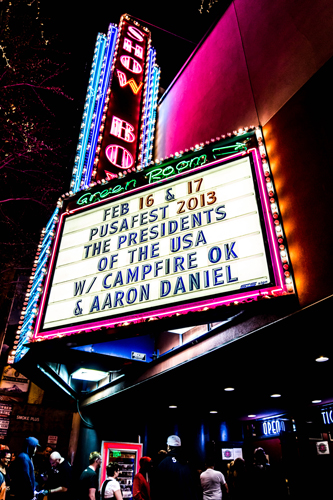 Not only is he a multi-media journalist, he is also an accomplished musician. He is the founder of SMI and drives the creative look, feel and branding for the publication. His years of writing, arranging, and performing live music in a variety of genres inform his ability to communicate the message and the mechanics of music. Roth’s work on SMI reflects his philosophy that music is the universal language, and builds community. He believes it has the power to unite people of every race, religion, gender, and persuasion.
Related ItemsAaron DanielsCampfire OkGodfrey DanielsSeattle Music HappeningsShowbox at the MarketThe Presidents of the United States of America
← Previous Story Fox and The Law kick off Spring Tour at Neumos
Next Story → SMI New Music Preview: ‘Go Find Your Own’ by Pony Time