Flogging Molly gets their Irish dander up in Seattle (Photo Slideshow) The DONOTS  – a high energy German Rock band – opened the night up with a great sound. The crowd really seemed to be enjoying their set, and many people who were waiting in line to by merch bailed  to run in to catch a few songs.

Second up on the stage were Mariachi El Bronx (AKA The Bronx), kind of a punk-mariachi band. (It’s really kind of hard to explain.) They definitely weren’t as high energy as what you might expect for a second act in this  bill, but they were very entertaining and kept the crowd engaged.

As is their custom, Flogging Molly greeted the crowd with raised pints in hand, ready to rock. It wasn’t long before the body surfing began, which included an odd looking fellow with no shirt and a bra.  Flogging Molly is an entertaining and fun-loving act. It’s always great to see entire families coming to enjoy the show together.

Regular banjo man Bob Schmidt had to fly home for a family emergency so Ray Suen, the violinist for Mariachi El Bronx, filled in for several numbers.

When the show ended, the whole band gathered items to throw to the crowd – . set lists, guitar picks, drum sticks and even some sweaty towels. A couple of members even jumped off stage and made their way out into the crowd to give hugs and thanks. 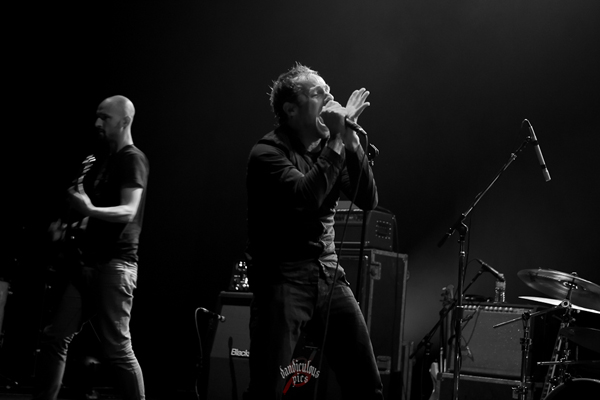 Dan Rogers is an up-and-comer in Seattle concert photography. In the mid 90’s Dan was a Light and Video Technician for local artists; however, his passion for music and capturing the moment was put on hold to raise his son. In 2010 Dan reignited his passion by plunging into concert photography. He has since had great opportunities photographing shows on behalf of KNDD 107.7 TheEnd and Back Beat Seattle. Social Distortion, Anthrax, and Garbage are just a few of the bands Dan has been able to cross off his photo bucket list. Dan views being behind the lens as an honor; taking a memory, freezing it in time and capturing the essence of the experience. These are once in a lifetime experiences we live for, memory alone will not suffice. Dan is thrilled to join the team at Seattle Music Insider as a contributing photographer.
Related ItemsDan RogersDonotsFlogging MollyMariachi El BronxSeattle ConcertsSeattle Music HappeningsThe Paramount
← Previous Story SMI Radio Ep. 86 On Demand: Vicci Martinez and Ben Short (Unsigned Only)
Next Story → SMI Radio Xtra: Reid Genauer from Assembly of Dust (Photo Slideshow)