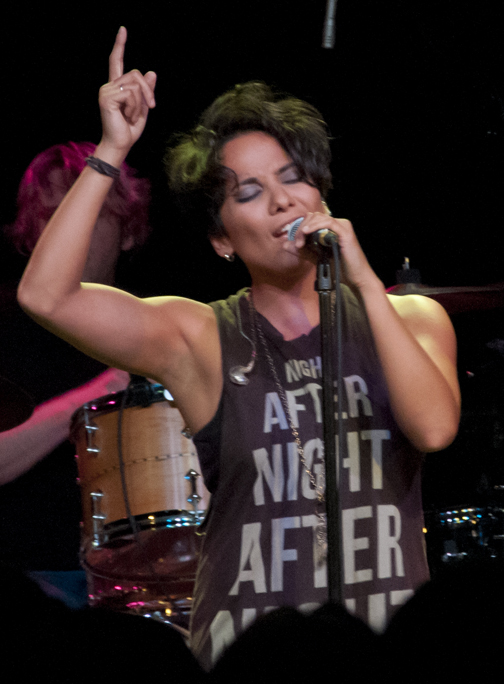 Vicci Martinez gained national attention with her strong showing on NBC’s The Voice.  She was signed to Universal and recorded the single Come Along with Cee Lo Green for her self-titled album, which dropped about a year ago. Thanks to Vicci’s strong work ethic, which included a busy touring schedule and hitting the radio interview circuit, the catchy tune has gotten a second life and is burning up the charts.

Vicci was in town recently to shoot the video, and she chatted about it recently on SMI Radio. You can hear the interview by clicking the link below.

The video of Come Along toggles back and forth between visuals of rural and urban landscapes, with Vicci and her backing band on stage (shot at The Triple Door) and several crowd shots. Cee Lo Green does not appear in the video, but there is some beautiful imagery during his lead vocal segment.

The video is a great showcase for Vicci’s natural charisma and stage presence. The live performance cut-aways to the visual imagery is celebratory, poignant, and maps well to the theme of the song.

It was directed by the brilliant Jon Jon Augustavo, who also directed the Macklemore and Ryan Lewis video for the hit single Thrift Shop and Same Love.

Doing my video is kind of a big first for me obviously. It is cool that I am doing it in Seattle. It didn’t have to be, there was a lot of ideas of getting it done in LA or New York because my label is there and they are familiar with the territory.

The director, Jon Augustavo, we kind of came together and decided that it would be really important and would making such a statement by doing my first video in Seattle and showing my roots. Especially, because I  kind of got swept up after The Voice, got into the studio and got signed and it was like bam, bam bam and I really didn’t have a lot of time to decide what I wanted to do. It just happened really quickly, so just taking the time that it has taken for the video and making the decision to come into Seattle has been great.

Vicci will be in Tacoma to play The Swiss Restaurant and Pub on April 26. Tickets are $15 ($16.52 with service fee) and are on sale now here.

Not only is he a multi-media journalist, he is also an accomplished musician. He is the founder of SMI and drives the creative look, feel and branding for the publication. His years of writing, arranging, and performing live music in a variety of genres inform his ability to communicate the message and the mechanics of music. Roth’s work on SMI reflects his philosophy that music is the universal language, and builds community. He believes it has the power to unite people of every race, religion, gender, and persuasion.
Related Items"Come Along"Cee Lo GreenJon Augustavojon jon AugustavoNBC's The VoiceSeattle Music HappeningsThe Triple DoorVicci Martinez
← Previous Story SMI Radio Ep. 89 On Demand: Ritzy Bryan (The Joy Formidable), Kelly & Ben (Beat 100) and Mat Hayward (Photo Slideshow)
Next Story → SMI Radio Ep. 90 On Demand: Michael “Fitz” Fitzpatrick (Fitz and The Tantrums) (Photo Slideshow)