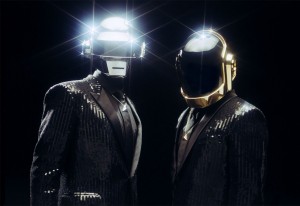 Daft Punk returns a decade later with Random Access Memories on May 17, 2013. The anticipated album features guest artists such as Pharell Williams, Giorgio Moroder, Todd Edwards and many more in their upcoming songs. It’s safe to say that Daft Punk stays true to their electro-disco sound that is a classic for their long time fans. Daft Punk released Get Lucky (Listen to Audio Below) as their single and made it to #3 on the U.S. Billboard Hot 100.

Pharrel Williams is featured on that number, and has helped the band reach the top charts with his soft vocals that will make almost any fan swoon. Daft Punk is sweeping the nation worldwide with Random Access Memories and the success of the record continues to grow from there.

According to the band, “We were drawing a parallel between the brain and the hard drive – the random way that memories are stored.” The album gives a feel of taking you back in time with a nod to some of their earlier work, but manages to pull the listener back into the present, surprising them with newer sounds and beats. But it’s not only funky beats they’re pulling out, the track ‘Within’  is accompanied by a real piano and eases the listener into melodic and nostalgia.

Daft Punk may have their soft moments but this is below the waist music with the main objective to get people up out their seats and boogie!   Mission accomplished. Who doesn’t dig a good Daft Punk song? Their spacey theme contributes with their music and sound as well, the infamous icon of a space helmet has become their trademark known all around the world. Their futuristic sound will have the listener wondering, “What they will come up with next?”

Not only is he a multi-media journalist, he is also an accomplished musician. He is the founder of SMI and drives the creative look, feel and branding for the publication. His years of writing, arranging, and performing live music in a variety of genres inform his ability to communicate the message and the mechanics of music. Roth’s work on SMI reflects his philosophy that music is the universal language, and builds community. He believes it has the power to unite people of every race, religion, gender, and persuasion.
Related ItemsDaft PunkGorgio MoroderNew Music PreviewNewsPharell WilliamsSopeary SokTodd Edwards
← Previous Story New Music Preview: ‘Out Here’ by Cody Beebe & The Crooks (Photos)
Next Story → Fall Out Boy Returns to Seattle (Photo Slideshow)