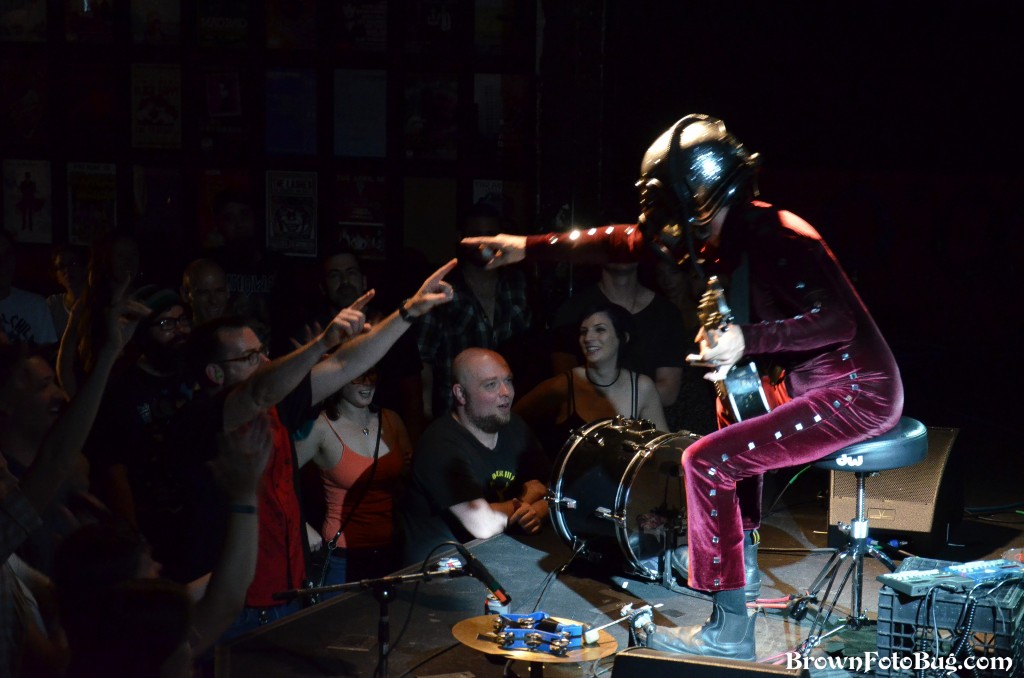 You think one man bands are lame?  Really?  Well, let me tell you about a guy named Bob Log III.  Take one part Delta Blues slide guitar, one part sparkly helmet with an old fashioned phone receiver as a microphone, one part love for entertaining the crowd and of live music, one part foot pedal with synthesizer, and one part crazy (maybe 2 parts crazy) and what you get is one incredibly fun show that you will never EVER forget.  Bob does about 150 shows a year, and in 30 countries.

Since he’s being doing this for about 20 years, do the math and that adds up to a whole lot of shows.  So, in order to not be monotonous or boring, you never quite know what he’ll do.  Crowd surfing in a blow up raft?  Yep, done it. Leave the stage to sing in the street outside The Crocodile?  Yep, many times. Bounce cute pretty girls on his knees as he beats the drums? With enthusiasm.  Get tons of free drinks from the crowd for playing killer party Delta Blues?  Bartender!!  Only bummer for this show was that we didn’t get to see the raft this time because it wasn’t a sold out crowd.  Which is shocking because this guy sells out to thousands a show across the world.

So my challenge to you guys?  Google him.  Check out his Youtube shows.  And when Bob Log III is back in Seattle, GO SEE HIM!!!  You will never forget your first time (or any time) with Bob Log III.  I know I won’t.

Oh, and check out the photos of the two opening acts.  Local one man band, Lonebird and local Seattle band Lonesome Shack opened for Bob.  Lonebird shared his Hubba Bubba beats and love of what he does with the somewhat sparse crowd.  Pitty, because he was pretty good!  And I could have listened to Lonesome Shack for another hour.  Starting as a one man band and now growing to three, they infuse  Mountain folk with rock.  Blend Ben Todd’s voice and guitar with Kristian Garrard on drums and Luke Bergman on bass and you get a very cool and unique sound.  Reminds me of the Black Keys in a way.  How these guys are not on the radio is beyond me.  Check out their new CD/LP/Cassette City Man that is out now.  (yes, I said Cassette!)

Arlene Brown is both a writer and photographer for SMI. She likes to take things one picture at a time. Covering and reviewing shows from Soundgarden, The Proclaimers, Lorde, The Head & The Heart, to Hank3, Bob Log III, New Politics, Black Joe Lewis, Grouplove, including local and national rising bands and more, she truly loves to try to get that perfect shot. Looking for that raw emotion, energy, power that only live music can deliver, she captures the essence of a show in her own unique style.
Related ItemsArlene BrownBob Long IIILonebirdLonesome ShackSeattle Music HappeningsThe Crocodile
← Previous Story NKOTB (New Kids On The Block) take fans back to the 80’s at T-Dome (Photo Slideshow)
Next Story → Capitol Hill Block Party 2013: 10 acts you need to see and hear (Videos)