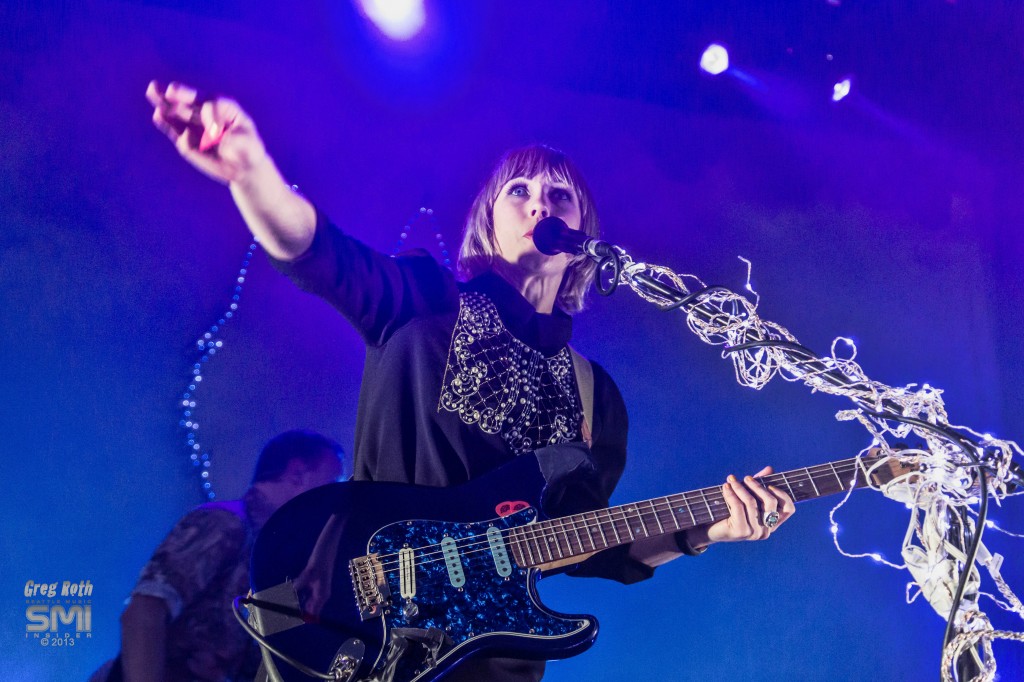 Ritzy Bryan of The Joy Formidable (Photo by Greg Roth)

This year’s lineup is a venerable list of indie rock staples of past generations and young, soon-to-be classic artists. Labor day is ironically going to be a lot of work for attendees as they try to decide which artists to see. Here are a few humble recommendations:

It’s bitter irony that The Joy Formidable aren’t playing on the Key Arena stage. Most of their repertoire comprises of arena ready anthems. Soaring melodies and rising guitar lines are the basis of most of the songs on their latest album Wolf’s Law. Even as a three piece, the band still brings an onslaught of sound. Ritzy Bryan’s known to command the stage as she dances across the stage with her guitar.

Charles Bradley is picking up the mantle where Otis Redding left off. Bradley’s smoky vocals are practically a time machine, transporting listeners back to a 1960s soul club. His low croons and vicious screams. At 65 years old, Bradley can still go toe-to-toe with all the festivals young performers. Here’s the hoping he performs his cover of Nirvana’s “Stay Away” – it’d be all to appropriate for the Seattle audience.

Bazan plays in Seattle quite a bit, but his performances are still always worth catching. Since he restructured his lineup from Pedro the Lion to now performing under his own name, Bazan has taken on many forms. He’s played solo acoustic doing house show tours, started a band with former Bedhead members called Overseas, and his formed a killer line up with his own “David Bazan Band.” The group’s performance last December at The Neptune, in which they played Pedro the Lion’s Control straight through, shows that Bazan still has the charisma and punk drive to deliver a fierce performance. Don’t get too lost in the intense and immediate guitar riffs though, because listeners won’t want to miss the heartbreaking lyrics behind it all.

Fidlar are loud. And that’s a good thing. The group’s hardcore punk sensibilities harken back to 80s punk groups like Black Flag and Fugazi. It feels like it’d be more likely to find Fidlar blaring their tunes out of someone’s garage, but Bumbershoot is as suitable a venue as any.

Speaking of 80s punk, Mr. Bob Mould had quite a big hand in establishing that whole scene. Through his work in Hüsker Dü he influenced his contemporaries in The Replacements and countless bands since. He also fronted the not-to-be-forgotten 90s group Sugar and has also had a reputable solo career. The man’s a legend. Judging from recent set lists, Mould will be planning tracks spanning his entire career.

And further rounding the punk nostalgia is New York group The Men. The Men released the fantastic Open Your Heart LP last year, which heavily borrowed from the reckless feeling of 80s garage rock, and took a sharp turn with the more acoustic driven New Moon album this year. Even when the guys pick up acoustic guitars, the grittiness still burns through. The Men feel sweaty and raucous no matter their incarnation.

Crystal Castles are made for dances. Though the tracks brood, it doesn’t mean the audience can’t participate in some moody dancing. The group’s sound takes notes from new wave and contemporary electronic music. It’s upbeat, hollow, and excitable. Dark pop is the name of the game, and Crystal Castles are trying to make it to the championships.

Kim Deal may have officially quit the Pixies, but she’s still got a great thing going with The Breeders. The group will be playing the entirety of their 1993 Last Splash album. Deal’s swooning vocals and watery guitar effects helped define the 90s, inspiring many artists who went on to more mainstream success. All reports say the reunion tour shows the band not missing a beat. Hearing a classic band play such a classic album is sure to be remarkable.

If you haven’t been keeping up, Compton emcee Kendrick Lamar recently declared himself the “King of New York.” Twenty years ago, that would have been unheard of. But Kendrick is all about pushing boundaries. That comment, along with a few name drops, in his verse on Big Sean’s track “Control” have kept Lamar’s name high up on everyone’s radar. He’s made a point to say he’s not here to just rap about partying or designer labels – he’s here to, in his words, murder the competition.

Last year Lamar dropped the fantastic LP Good Kid, M.A.A.D. City, which was executive produced by Dr. Dre. Lamar is a story teller, first and foremost. Each track on his album pushes forward a compelling narrative of Lamar borrowing his mother’s van for a night of sketchy exploits with his friends. His prowess as a lyricist is nearly palpable on this album and nearly every other song he features on. Lamar will likely perform with no stage set up like he has recently – just himself and a microphone. He’s making the statement “this is all I need, I don’t need a gimmick.”

Before Ben Gibbard and the boys were a Grammy award winning indie rock success story, Death Cab for Cutie were putting out sleeper hit albums on Barsuk Records. For the album’s tenth anniversary, Death Cab will play the seminal Transatlanticism in its entirety.

What many consider to be the band’s best work, it’s a huge testament to how much Death Cab would go on to define modern indie rock. Ten years past and Transatlanticism sounds even more relevant today than it did when it first came out. Gibbard’s lyrics still hit hard. Walla’s subtle guitar parts still incite bittersweet emotions. The atmosphere is dense on the record. To hear a band that’s gone on to accomplish so much since this album was released (which isn’t even their most commercially successful), is a privilege.

Dusty Henry got his first bite of the local music scene at a Schoolyard Heroes show in Bremerton, Wash. and has been craving it ever since. He graduated from Seattle Pacific University in 2012 with a degree in Journalism. He has written for CityArts Magazine, KEXP.ORG, SSG Music, Ballard News-Tribune, Queen Anne and Magnolia News, and more. He’s an avid record collector so if you see him digging through record bins (most often Sonic Boom in Ballard) feel free to say hello! Dusty also manages the local music blog PreAmp where he writes about smaller local acts and provides resources for bands as they continue to grow.
Related ItemsBob MouldBumbershootCharles BradleyCrystal CastlesDavid BazanDeatch Cab For CutieDeath Cab For CutieDusty HenryFidlarKendrick LamarSeattle Music HappeningsThe BreedersThe Joy FormidableThe Men
← Previous Story Band of Horses goes acoustic at The Seasons Performance Hall (Photos)
Next Story → Bumbershoot 2013: You can’t eat it all