Looking back on Bumbershoot 2013: Days 2 and 3 Highlights (Photos) 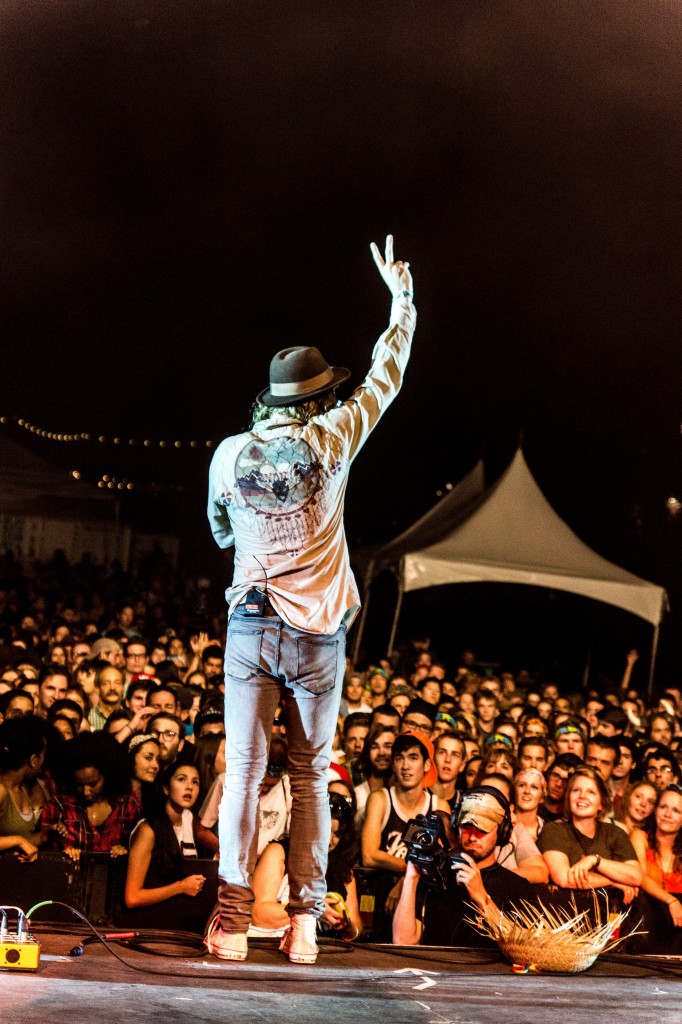 Capturing the entire Bumbershoot experience is a daunting task some times it takes a few days to process the various sights and sounds as well as process photos (Thank you Greg and Jason). How do you explain the feeling of going from a hot-glue robot art exhibit while walking past a living statue to get to see one of your favorite band’s play one of their most beloved albums all the way through? Bumbershoot embraces the artistic experience. Getting it all in words may be impossible, but take a look at just a few of the many music highlights from this past Labor Day weekend.

If the line going from Key Arena all the down to the food court was any indication, there was much anticipation for hometown success Death Cab For Cutie’s headlining performance. The band performed their cult hit Transatlanticism straight through for the album’s 10 year anniversary, as well as their former label Barsuk’s 15 year anniversary. Though it’s been a decade, the live performance of the record didn’t feel dated. It’s partially due to the fact that the band’s been playing many of the songs in their live sets since Transatlanticism’s release. But to hear the triumphant opening chords to “The New Year’ segue into low balladerring of “Lightness” and then back up again to the nearly danceable “Title & Registration” felt cathartic. For those who had been following Death Cab since the band’s early years in Seattle, it was a fitting tribute to where Ben Gibbard and company came from. To the younger fans, it was a history lesson of sorts.

Gibbard’s solo performance of “Passenger Seat” may not be the typical arena rock power ballad that Key Arena is used to seeing, but his immersion into the song made the room feel smaller and intimate. Later he’d up the ante with a killer duel drum performance with drummer Jason McGerr duing the ferocious (a term typically not associated with Death Cab) “We Looked Like Giants” before coming down again with the somber “Lack of Color.” Afterward the band played through a selection of tracks from other albums, ranging from 2012’ “You Are A Tourist” off of Codes and Keys to “405” from 2000’s We Have the Facts and We’re Voting Yes.

But Death Cab wasn’t the only group taking the “play a classic album” approach. Kim Deal, formerly of the Pixies, revitalized her 90s indie rock group The Breeder’s to play their classic Last Splash in its entirety. The band’s dedication to detail was admirable. They claim to have brought the same moog synthesizer that they borrowed from “some guy” and used on the original recording and made sure band members played the instruments on the exact parts they played on the record. The Breeders sounded like they hadn’t missed a rehearsal since they hit success in 1993. Deal was charming with banter in between tracks, smiling. During their radio hit single “Cannonball,” Deal would scream into a separate mic to mimic the megaphone effect on the original album version. Songs like “Do You Love Me Now?” showed the band as masters of the craft, returning to a genre they helped create.

Gibbard affiliate David Bazan rapt his audience with a solo acoustic set in the early afternoon. Bazan, who used to perform under the moniker Pedro the Lion, was able to quiet a crowd of people at an outdoor festival – not an easy task, to say the least. There were no frills with his performance. Just Bazan in his trademark black t-shirt playing his (generally) sad songs.

“Someone once told me if I worked hard on my lyrics, I’d be a big hit at festivals,” Bazan laughed, commenting that it seemed to be true. The set covered highlights from most of his past projects including Pedro the Lion, Headphones, and his solo work. As per tradition, Bazan let the audience ask him questions in between songs. Most people simply commented on his beard or asked vague queries about his thoughts on religion.

FIDLAR took a bit different approach. The songs were loud, obnoxious, and ridiculous. And that’s not an insult. The band’s name, which they stated numerous times between songs, stands for “F**k It Dog Life’s a Risk.” That should say something. Lead vocalist Zac Carper wore a white t-shirt with “Straight Edge” written in and crossed out in black marker. The group sped through punk rock tracks like “Cheap Beer” and “Awkward” as a pit bounced and bashed each other in front o

The Zombies reminded the Bumbershoot crowd how many hits from the 60’s they produced. Frontman Colin Blunstone was in fine voice and Keyboardist Rod Argent wowed the crowd with some stunning solos. Their flawless live versions of songs like “Time of The Season,” “She’s Not There,” and the Argent classic and “Hold Your Head Up” were simply brilliant.

Earlier in the day, Another 60’s rock icon, Eric Burdon, who was dressed in a gray hoodie performed his classics. Like fine wine, The 70+ rocker’s voice has just gotten better and stronger with age and he takes crap off of no one. 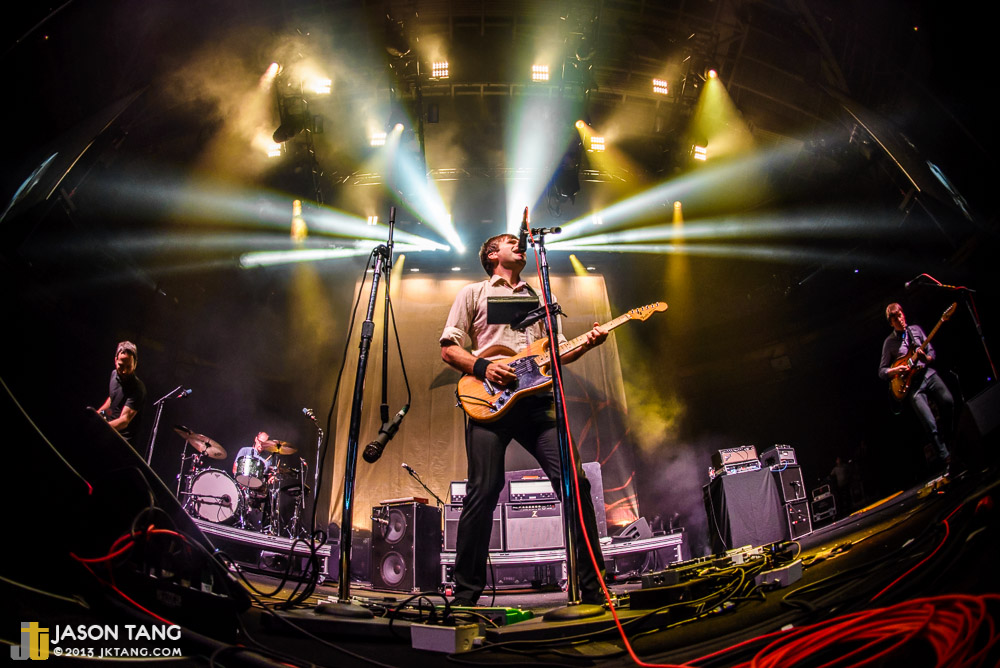 One of Bumbershoot’s MCs introduced Brooklyn’s The Men as “one of the most ‘rock’ acts of the entire festival.” While a trite statement, it was also pretty accurate. The Men played loud and intensely. Even though their latest record, New Moon, veered toward acoustic heavy country tracks their live set up is still very much in the sweaty punk tradition. Bassist Ben Greenberg aggressively strummed his bass (yes, strummed) and bent his ankles into disjointed positions as he bounced around the stage. Guitarists Mark Perro and Nick Chiericozzi jumped with the grizzled hair swaying around them.

Even though the vocals were not very prevalent in the mix, “Open Your Heart” felt like a command from the band. If there had been more of an audience (the band played the same time as Alt-J, whom had a large line waiting for them outside Key Arena), a more FIDLAR-esque crowd surely would’ve risen up.

The Joy Formidable also took the “play loud” concept to heart, even blowing some of the stage gear near the beginning of their set. The band made sure everything about their closing night set was epic. Epic meaning images of galaxies, recorded spoken word poetry between songs, and graphics of arms outstretched in front of lush sunsets. Ritzy Bryan zipped around the stage, brandishing her guitar as a weapon of noise.

Allen Stone came back home to the Emerald City to grab his fans by the hands and take them on a sweet soul ride.

MGMT brought psychedelics to Key Arena – exposing fans of their mainstream hits to the more obscure and darker tracks in the later part of their catalog. Visuals resembling Windows 95 screensavers directed by Roger Waters projected on the screens above the band. MGMT opened with “Weekend Wars” from their crossover hit Oracular Spectacular but steeped most of the set in older material and cuts from their last album Congratulation

Allen Stone came back home to the Emerald City to grab his fans by the hands and take them on a sweet soul ride. Stone treated the Bumbershoot crowd to some reworked versions of tracks from his debut record as well as a funky cover of the Rufus classic “Tell Me Somethin’ Good” complete with the trademark talk box. Actor, Comedian and Saturday Night Live alumni, Tim Meadows  was seen enjoying the show from backstage.

Another great thing about Bumbershoot is the eclectic blend of music from different eras. Rock veterans like Bob Mould, Redd Kross and Superchunk satisfied their longtime fans and showed a younger generation how it is done delivering solid and tight sets. 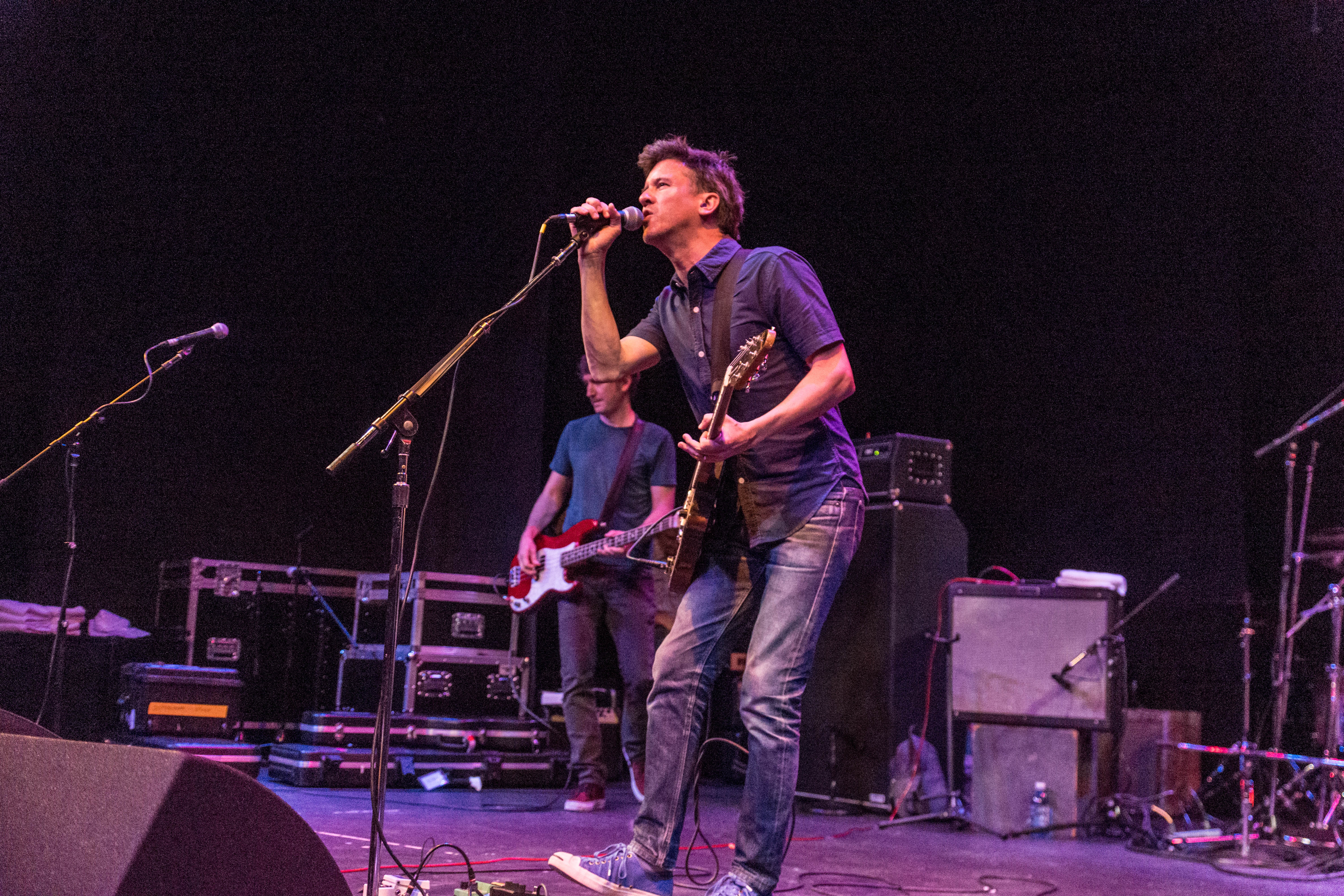 Not only is he a multi-media journalist, he is also an accomplished musician. He is the founder of SMI and drives the creative look, feel and branding for the publication. His years of writing, arranging, and performing live music in a variety of genres inform his ability to communicate the message and the mechanics of music. Roth’s work on SMI reflects his philosophy that music is the universal language, and builds community. He believes it has the power to unite people of every race, religion, gender, and persuasion.
Related ItemsAllen StoneBob MouldBumbershootDavid BazanDeath Cab For CutieDusty HenryEric BurdonFidlarGreg RothJason TangMGMTRedd KrossSeattle Music HappeningsSuperchunkThe BreedersThe Joy FormidableThe MenThe Zombies
← Previous Story Looking back on Bumbershoot 2013: Day 1 Highlights (Photos)
Next Story → New video “White Walls” from Macklemore & Ryan Lewis goes live