By Arlene Brown on February 18, 2014@brownfotobug 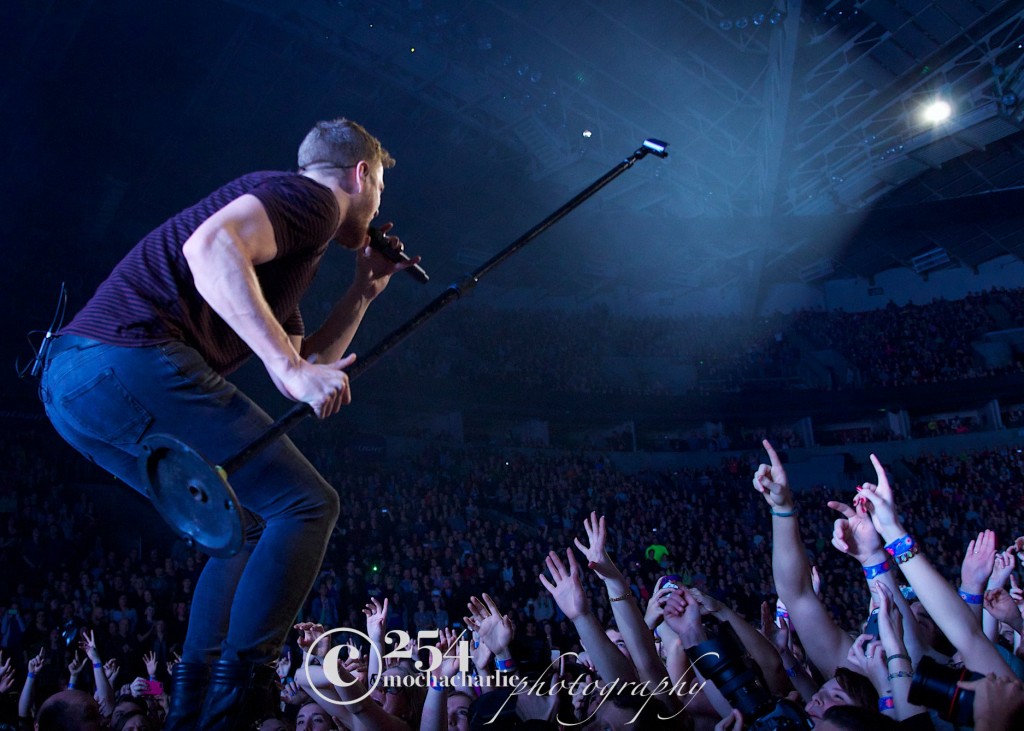 Rarely does a day go by that an Imagine Dragons  song isn’t heard in my house.  Or car.  Or my head.  To see them live was definitely a big one off my bucket list.  Knowing they are going full blast on their US tour, I knew it was going to be  a good show.  Adding their openers made for an unforgettable night.

X Ambassadors was the first opener. Lead singer, Sam Harris, had so much energy, dancing, jumping, hip thrusting all over the stage. “The Business” was a crowd favorite. But the whole set definitely had everyone on its feet! Sam’s wide range of singing is impressive. And the fact he plays a mean sax doesn’t hurt, either. His brother, Casey, plays keys. They’re joined by Noah Feldshuh (guitar) and Adam Levine (drums.) What a fun up and coming band!

The Naked And Famous came on stage to low lights and fog. It made for some cool effects, especially when added to Alisa Xayalith light and angelic voice. A mix of Ms Mr and Chvrches, The Naked and Famous gave us simple harmonies mixed with dynamic backup of keys, guitar riffs and a solid drum performance by Jesse Wood. A much calmer stage presence than X Ambassadors, but still powerful.  But by the end of the set, everyone was ready to dance some more.  Personally, I liked them better recorded.  The reverb of their drums and bass off the back of the stadium was a bit distracting.  Lesson to all: Not everyone sounds the same live as they do recorded. But their voices were beautiful and harmony was spot on. Definitely want to see them again in a smaller and more intimate venue.

By the time Imagine Dragons came on stage, Key Arena was ready to burst. You could feel the anxiety building until it exploded all over the stage throughout Imagine Dragons’ performance. From their first song “We are Falling Down” the night only got better as we were treated to “Tiptoe,” “Uptight,” “It’s Time,” “Who We Are,” “We Fall Apart,” (complete with 4 part harmony.) Lead singer Dan Reynolds reminisced on the first time they played to 100ish people in Seattle. These guys have come a long way in just a couple of years. With approximately 16,500 of our closest friends waving their cell phone “flashlights”, we enjoyed chart toppers Demons and Radioactive to close out the night. The highlight of the night for us was their cover of Rush’s “Tom Sawyer.” While they said they’ve been leary of playing it at shows, I’m glad they shared it with us. It was fantastic!

We go to a lot of shows. Very few compare to how “family friendly” this one was for us. The messages of Imagine Dragons’ songs are positive, for the most part. “Don’t change who you are for anyone.” “Don’t forget where you came from.” These are messages I want my daughters to hear. These are messages we should all hear more often. This, to me, is why Imagine Dragons is continuing to grow in their success. Well, that and they are extremely musically gifted. Dan, along with Ben McKee, Dan Platzman, Wayne Sermon, Andrew Tolman, DANiiVORY, Brittany Tolman, Dave Lemke, Andrew Beck, Aurora Florence, we thank you.
Keep beating those drums, guys. We’re listening, dancing, and singing right along with you.

Arlene Brown is both a writer and photographer for SMI. She likes to take things one picture at a time. Covering and reviewing shows from Soundgarden, The Proclaimers, Lorde, The Head & The Heart, to Hank3, Bob Log III, New Politics, Black Joe Lewis, Grouplove, including local and national rising bands and more, she truly loves to try to get that perfect shot. Looking for that raw emotion, energy, power that only live music can deliver, she captures the essence of a show in her own unique style.
Related ItemsArlene BrownImagine DragonsKey ArenaMocha CharlieSeattle Live MusicSeattle Music HappeningsThe Naked and FamousX Ambassadors
← Previous Story Panic! at the Disco kicked off tour in Seattle (Photo Slideshow)
Next Story → Live Review: Mudhoney Slays at Tractor Tavern’s 20th Anniversary Bash