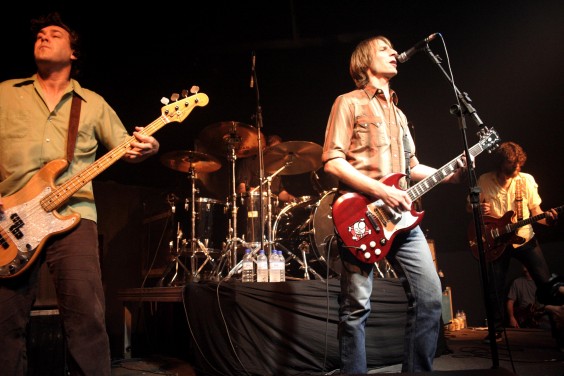 Perhaps the testosterone-dominant crowd was still permeated by post-Valentine’s Day resentment, but as soon as I entered the Tractor on a rainy and windy Saturday night I could feel tension in the air. “Sold Out” signs were plastered around the entrance, but the clamoring hordes of ticketless Seattleites didn’t materialize as I’d thought they would. Instead, the damp, predominantly post-40-year-old attendees ambled into the bar randomly, and the lack of any kind of line at the front door had me wondering if the Tractor had stopped selling tickets too soon.

Opening band Unnatural Helpers took the stage promptly at 9:45 p.m. and launched into a tight set of jagged, short, and powerful punk-pop that at times reminded me of Wire, Art Brut, and the Posies (if the Posies had listened to more Gang of Four records). After they’d finished their set, many in the crowd could be heard exclaiming, “Those guys were awesome!” and I agree with their assessment. Their latest release called ‘Land Grab’ was produced by local mop-top aficionado Kurt Bloch, and was released in 2012 on the Sub-Pop offshoot Hardly Art records.

After the Tractor bar staff had served 116 more PBR’s (fifteen minutes) the members of Mudhoney could be seen ambling onstage and off, setting up their guitars and drums, and making me wonder, “What? No one wants to be a roadie for Mudhoney?” Then I saw Mudhoney bassist Guy Madison ordering at the end of the bar, quickly followed by drummer Dan Peters, and both sauntered backstage clutching beers and cocktails.

By the time Mudhoney hit the stage the crowd was amped-up and near capacity. This was their first show since playing Perth, Australia on January 31st, and their only show until resuming their tour in Brazil this May.

Mark Arm brought a full bottle of Chardonnay onstage and placed it near the drum riser, and Steve Turner (guitar) placed his brown amber on his amp. I’d expected them to kick off the show with a powerful song, and “Slipping Away” was perfect. Guy’s bassline and Dan’s rapid-fire snare set the table for Steve’s super-fuzz and Mark’s pointed and not-quite-monotone vocals. (Disclaimer: I don’t know the Mudhoney catalog well enough to list each song they played, so instead I’ll simply explain how things progressed.)

The second and third songs were Mudhoney at their best; fast-paced, raw, and high-energy. A mosh pit quickly formed in front of the stage, which isn’t necessarily a good idea considering the small size of the venue, and the close proximity of people who don’t exactly want to be part of a mosh pit. Sure enough, during the fourth song some guy hopped onto the stage, and stage-dived into the crowd. This wasn’t a twee gentleman, and soon his 250 lb. + frame was shoved back towards the stage and into the face of Mark Arm while he was singing. Mark didn’t see it coming, and stopped playing after the collision. “That was really great, dude”, Mark deadpanned while feeling his mouth to see if it was bleeding. I really thought that Mark was going to pull the plug on the show, but after regrouping, and taking another slug of Chardonnay, he decided to keep things going. Dan Peters clicked off a quick “1,2,3,4!” on his sticks, but Mark stopped him, seeming to choose a different, less-frenetic song so the crowd could cool off a bit.

Then they launched into “Touch Me, I’m Sick” and the moshing started all over again. Within a few seconds, fists were flying, and the first of several patrons to be physically removed from the venue by ‘security’ was manhandled through the crowd standing near the bar. For the next several songs, including ‘Suck You Dry”, “The Money Will Roll Right In”, “I’m Now”,  “I Like It Small”, and “1995” there were shoving matches and near-fistfights. Bartenders leapt over the bar to quell arguments, and the band was visibly concerned that something really stupid might happen.

I’ve seen Mudhoney four times, but I’ve never seen Mark sing as aggressively or pointedly as he was at this show. By the time he ditched his guitar and simply became a microphone-toting lead singer he was leaning menacingly into the crowd, flaying his arms and over-enunciating a la Johnny Rotten. There were times when he seemed possessed; eyes fixed on something in the back of the room, and ready to tear the hair out of anyone who came too close. At one point Steve Turner put his arm around Mark and asked, “Are you all right?” The rest of the band seemed to be trying to keep up with Mark’s energy and fierceness, which surprised me considering that they’ve been playing together for twenty-five years.

After an hour of fury, and one empty bottle of Chardonnay, Mudhoney left the stage to the chants and screams of sweaty patrons who knew they’d just seen Mudhoney at their most fierce. Ten minutes of stomping and chanting brought them back onstage for a three-song encore, and all one had to do was look at Steve Turner’s grin to know that the band was also satisfied with this special, stellar night.