Pixies shake some skulls at The Paramount (Photo Slideshow)

By Christine Mitchell on February 20, 2014@Housetornado37 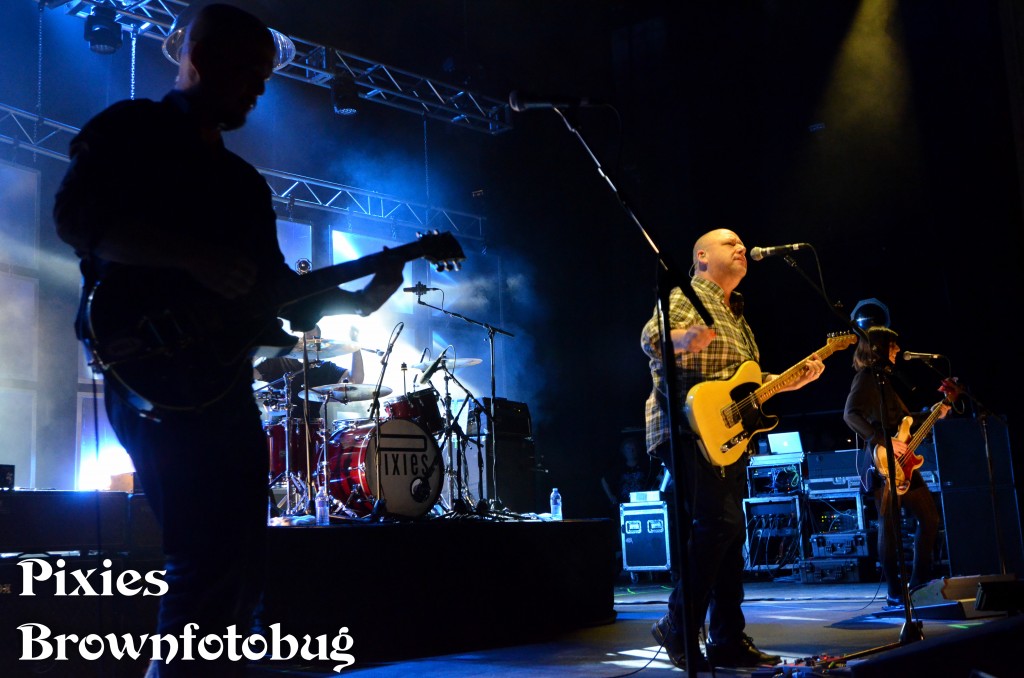 Pixies at The Paramount (Photo by Arlene Brown)

At times it felt like my skull was being ripped off the top of my head. And I loved it. I’ll scream it from the rooftops: Pixies at The Paramount is my favorite show of the year, so far. Their performance was a surprise and a delight. Why a surprise? Because I had pretty much figured that I’d never get to see Pixies, a band that had broken up soon before I discovered them, and that reunited while I was down in the trenches changing diapers.  And a delight because . . . damn, they nearly blew the roof off the place.

But first things, first: Best Coast. Singer Bethany Cosentino and company played surf-rock, girl-group inspired tunes for the crowd that was filing in and piling up. It was nice enough, but frankly I got tired of the repetition of “I love you,” “I hate you,” “I miss you.” “When you leave my bed is empty” . . . sigh. I suppose I’m too far from this sort of sentiment in my life cycle to appreciate it anymore, or perhaps it’s just that the lyrics showed little complexity and tended toward age-old clichés and catch-phrases. Cosentino also used effects on her singing that made the vocals sound echoed and metallic, which soon became droning. I heard bits of The Go-Gos, Concrete Blonde, and The Pretenders. In any case, the musical side shook out as the better half of the performance as I do like surf-rock. I appreciate the girl-group angle as well. I do wish it had all played out with more nuance and less caricature.

By the time Pixies came on, personal space was down to zilch, since the place was packed. Now, I love hard music. I like music about weird things that remind you of the underside of a bug (e.g., “Bloody your hands on a cactus tree/ Wipe it on your dress/ And send it to me”). So of course, Pixies hit my sweet spot. “Bone Machine” was the perfectly grinding good start that the room had been waiting for, and when Black Francis roared into the mic, the crowd roared right back. Frank, Joey, Dave, and current touring bassist Paz Lenchantin (who very adequately fills Kim Deal’s shoes) continued the sonic assault with “Wave of Mutilation,” “U Mass,” and “Gouge Away.” It was as if time had never passed these songs by. The fans have never let them go. If you’ve never seen Joey Santiago attack the guitar (I would normally say ‘play the guitar,’ but it would be an insult to Santiago), I urge you to make the time, dial up the YouTube, whatever you have to do to make it happen. The sounds Joey’s guitar makes are unearthly and inhuman, rapid-fire and spectacular.

Beginning with “Caribou,” five of the 8 songs from the band’s debut EP Come On Pilgrim were interspersed throughout the set. How many bands (The Cars? Devo?) have such an amazing first album that practically the whole thing could be played and it comes off sounding like an insanely great “best of”? In comparison, all four songs off EP2, the band’s most current release, were played and sounded fine, if not (yet) having attained the stature of the earlier work. I did like the sound of “Greens and Blues,” though. We also got “Bagboy,” also a newer song, and, of course, tons of old favorites: “Crackity Jones,” “Mr. Grieves,” “Here Comes Your Man,” “‘Monkey Gone To Heaven,” and “La La Love You,” which started off a little wonky, but was worth it to hear some sexy Dave Lovering Sinatra. Black Francis shrieked his throat off. Santiago shredded. It was all very effing magical.

One thing that was missing? Banter. Frankie and the rest seemed happy enough to be playing, they just didn’t seem interested in interacting with the crowd, except for gratefully accepting the outpouring of whoops and applause at the end. Joey Santiago was a sweetie, though, as he encouraged a teen dressed in a Pixies shirt and dapper bow tie to take his picture (which he hilariously posed for).  The last encore song was “Planet of Sound.” It was where we had all been for an hour and a half, and it was hard to come back down to earth.

Christine Mitchell has been poring over album liner notes pretty much since she acquired the skill of reading, and figured out the basic structure of rock songs at an early age. Whether it’s the needle popping into the first groove of the record, the beeps that signal the beginning (or end) of a cassette tape, or digital numbers ticking off the seconds from zero, music brings Christine happiness, ponderous thought, opportunities for almost scientific study, and sometimes a few tears. When she started attending live shows two decades ago, a whole new piece of the puzzle clicked in and she has been hooked ever since.
Related ItemsArlene BrownBest CoastChristine MitchellPixiesSeattle Music HappeningsThe Paramount
← Previous Story PUSAfest 2014 kicks out the jams (Photo Slideshow)
Next Story → ’80s Band “The English Beat” sells out The Showbox! (Photo Slideshow)