By Christine Mitchell on March 16, 2014@Housetornado37 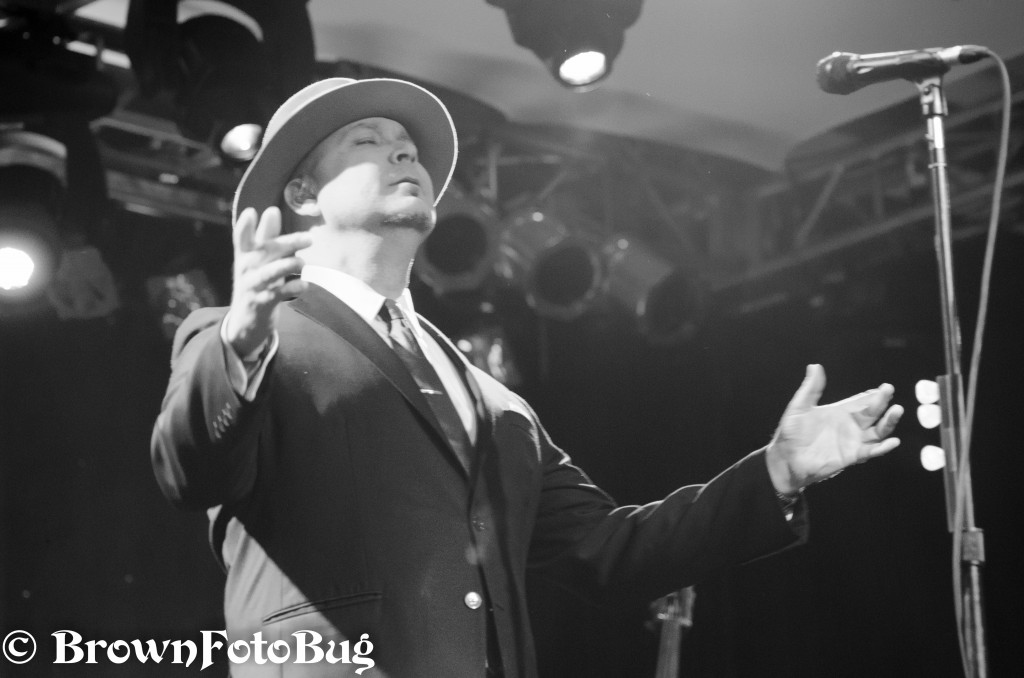 I’m still trying to figure out why Big Bad Voodoo Daddy (BBVD) played at the Snoqualmie Casino. Other stops on their current tour don’t seem very casino-y . . . so, what could it have been that lured them there? Was it the huge, well-lit stage? The great sound in the room? Was it the massive dance floor laid out right in front of the band? Yeah, that all probably had something to do with it.

The Casino Ballroom is monstrous, and on this night it was filled with rows of nice-quality fold-up chairs that framed the dance area. It would have worked better if the room had a slope to it (yeah, I’m short, and yeah, I was in the back); as it was, I did my best to keep track of the action from behind a big dude’s head. The room filled right up, too, and the age ranged from those in their late thirties to those in their late sixties.

BBVD started off with “Calloway Boogie,” a track off of their 2009 album of Cab Calloway covers How Big Can You Get? The Music of Cab Calloway, and then continued on for an hour-and-a-half without missing a beat or toot of the horn. If you are looking to get yourself decked out and swing or Lindy hop the night away, look no further than these guys. But weirdly enough, I didn’t see nearly the number of swing-scenesters that I had expected. I noticed this trend the last time I saw The Cherry Poppin’ Daddies, but it didn’t surprise me as much then, as The Daddies’ music ranges a lot further than just swing (and they stick to that range-iness in their live shows). Big Bad Voodoo Daddy, however, is full-on retro swing. None of the songs that were played touched on anything tangibly modern, and a large number of songs were covers of actual swing classics (“Minnie The Moocher,” “The Reefer Man,” and “I Wan’na Be Like You,” (the latter courtesy of Disney’s The Jungle Book). Well . . . yeah, the swing scene is dead, and I suppose that it really hit home for me on this night.

It’s really too bad, though, because Big Bad Voodoo Daddy is top-notch. Lead singer Scotty Morris has a silky voice filtered through too much whiskey and too many cigarettes; he ain’t no Sinatra, but he can croon a bit. I particularly enjoyed Kurt Sodergren’s drumming; he was in an enclosure, but there was nothing lost in translation behind the plexiglass. He was awesome. Double bass player Dirk Shumaker actually DID look like Sinatra, and when the horn section gathered around him and pianist Joshua Levy, it looked like a schmaltzy Mad Men-era painting come to life.  Morris didn’t present much of an arresting stage presence, but the whole band worked together to bring life to the performance, mixing it up by moving around the stage with some nice instrument solos (the trumpet was particularly fun). “Pinstripe Suit,” “You, Me, and the Bottle Makes 3,” and “Zig Zaggety Woop Woop” were all old favorites, while “The Jitters” and the closing song “Why Me?” were off of BBVD’s latest album, Rattle Them Bones. The audience seemed a bit indifferent at first, but by the end of the night the dance floor was packed.

One fun thing about seeing a casino show: losing $20 on the penny slots. Wait a minute . . .

Christine Mitchell has been poring over album liner notes pretty much since she acquired the skill of reading, and figured out the basic structure of rock songs at an early age. Whether it’s the needle popping into the first groove of the record, the beeps that signal the beginning (or end) of a cassette tape, or digital numbers ticking off the seconds from zero, music brings Christine happiness, ponderous thought, opportunities for almost scientific study, and sometimes a few tears. When she started attending live shows two decades ago, a whole new piece of the puzzle clicked in and she has been hooked ever since.
Related ItemsArlene BrownBig Bad Voodoo DaddyChristine MitchellSeattle Live MusicSeattle Music HappeningsSnoqualmie Casino
← Previous Story Cataldo: ‘Gilded Oldies’ release party at the Tractor Tavern (Photo Slideshow)
Next Story → Glasvegas Makes It’s Triumphant Return To Seattle’s Columbia City Theater