By Christine Mitchell on April 8, 2014@Housetornado37 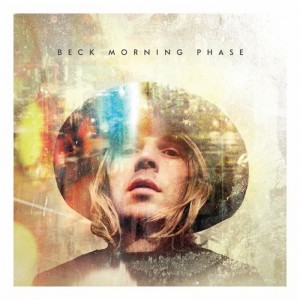 From the opening strains of “Cycle,” Beck’s Morning Phase (Capitol) plays out as its titular title indicates. Beginning with the sounds the sun’s rays might make as they break over the horizon, the album captures those earliest moments of the day that come after a long night of darkness, both literal and metaphorical. As “Cycle” ushers in “Morning,” a xylophone delicately picks out shimmering dewdrops on grass as Beck Pink Floyd-ishly sings “This morning/I let down my defenses/Won’t you show me the way it could have been?” with a soaringly multi-tracked vocal. This second track is an instant attention-getter, drawing you in for a cuddle before coffee; hell, before you even make it out of bed. It’s one of those languid yawn-and-stretch deals that feel soooooo good.

“Heart is a Drum,” is probably the fastest paced song, which isn’t saying much. This is a happily meandering track with more layers of vocal, amicably plodding drums, and propelling piano. “Say Goodbye” is another standout; the refrain “These are the words you use/to say goodbye” having ingrained itself into my head (I keep hearing them when I’m in the shower). The single “Blue Moon” honestly is not one of my favorites here; while the chorus is airy and beautiful, the verses feel strained in a weird way that feels forced and out of place on an otherwise relaxed album.

And, something does change after “Blue Moon,” the remaining tracks take a darker, more introspective turn (“Unforgiven,” “Wave”). Yet underneath the morning gloom, optimism still remains in the beautiful and studied, slow-paced textures of vocals, strings, and keys. “Don’t Let it Go” and “Blackbird Chain” illustrate this theme, the latter even feeling a little languidly jaunty in its arrangement with clean-toned guitar and steel pedal, along with the affirmation that “I never never never never never will refuse you.” “Turn Away” comes off as a CSNY homage, while “Country Down” sounds like a heroin-induced down-home ditty.

Morning Phase closes with “Waking Light,” which sounds intensely electric, plugged-in, and full-band when compared to the songs preceding it. The ringing tones of a glockenspiel remind me of some of Andrew Bird’s finer moments, and the song ends with the album’s only growling feedback. Is it my tummy? Is it time for lunch? All kidding aside, it took me several weeks to completely digest this album; while the beginning hooked me right away, the quieter, slower tone throughout, while sounding beautiful, became a bit monotonous until I was able to really devote multiple listens to the whole thing. I wouldn’t call it a slow-grower, but it is definitely one of those albums that requires a certain setting to be appreciated. Otherwise, it could easily be relegated to background music, and it’s far too good for that.

Beck apparently has another album already in the works. Morning Phase harkens back to the fan-favorite Sea Change; dare we speculate on what comes next? After this one, I expect only the best.

Christine Mitchell has been poring over album liner notes pretty much since she acquired the skill of reading, and figured out the basic structure of rock songs at an early age. Whether it’s the needle popping into the first groove of the record, the beeps that signal the beginning (or end) of a cassette tape, or digital numbers ticking off the seconds from zero, music brings Christine happiness, ponderous thought, opportunities for almost scientific study, and sometimes a few tears. When she started attending live shows two decades ago, a whole new piece of the puzzle clicked in and she has been hooked ever since.
Related ItemsAlbum ReviewAlternativeAndrew BirdBeckIndieMorning PhaseNew Music PreviewSeattle Music Happenings
← Previous Story Chinook Fest announces stellar 2014 lineup (Photo Slideshow)
Next Story → Against Me! brought the Neptune to life! (Photo Slideshow)