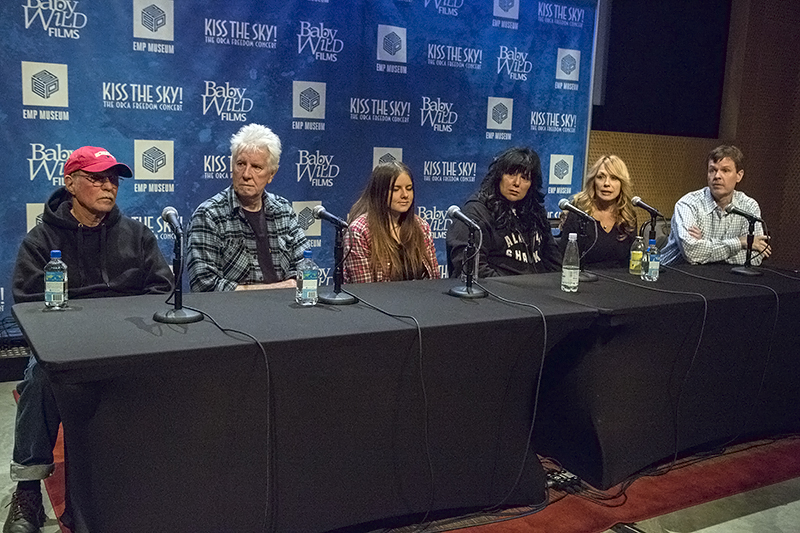 SMI was on hand at the EMP’s JBL Theater on a beautiful Earth Day afternoon for a very special press conference. Now, normally you’d find us up in the front row capturing the concert action for you, but we gladly attended the press event in lieu of the show, as every ticket sold for that night’s Kiss The Sky!: The Orca Freedom Concert benefited wild orca research and advocacy, and it was a full house.

This was due in no small part to the presence of those sitting at the press conference table: Ann and Nancy Wilson of Heart, Graham Nash of Crosby, Stills, Nash, and Young, Country Joe McDonald of Country Joe and the Fish, and Arielle, easily the youngest present,  but an up-and-comer who is the protege of Brian May of Queen. Joan Jett was also performing, but did not attend the press event.

Although the talent at the table spanned several decades, all were united in their emphatic support for the freedom of orca whales in captivity. Country Joe and both Ann and Nancy were particularly moved to action after viewing the 2013 documentary Blackfish, a film that focused on the life of a captive killer whale at Sea World. Graham Nash recounted a personal story about seeing an 80-foot long blue whale pass under David Crosby’s boat, which inspired the CSNY song “Wind on the Water.” Arielle stated her interest in raising awareness of dolphin and whale captivity for the younger generation, stating “no one’s going to listen to my music if things are falling apart all around me.” Event organizer and Baby Wild documentary director Michael Harris spoke of the ease and speed it took to arrange the Kiss The Sky! event, saying that Ann and Nancy signed on in “less than five minutes.”

Country Joe McDonald, who protested the Vietnam war at Woodstock (the original one), put the spirit of the event in simple music layman’s terms: “It’s really hard to write an entertaining song that the audience likes, that we like, about a horrible, depressing subject . . . but, hopefully we’ll pull it off . . . a spark can get set . . . and what the f**k, maybe they’ll set those orcas free!”

The musicians joined forces to perform CSNY’s “Wind on the Water,” “Teach Your Children Well,” and Ann Wilson’s “Baby Wild,” written for the aforementioned documentary. We here at SMI envy, and also thank, the concert-goers at the Sky Church on this night. We know that it was awesome, and all for a great cause.

Arlene Brown is both a writer and photographer for SMI. She likes to take things one picture at a time. Covering and reviewing shows from Soundgarden, The Proclaimers, Lorde, The Head & The Heart, to Hank3, Bob Log III, New Politics, Black Joe Lewis, Grouplove, including local and national rising bands and more, she truly loves to try to get that perfect shot. Looking for that raw emotion, energy, power that only live music can deliver, she captures the essence of a show in her own unique style.
Related ItemsAlex CrickAnn and Nancy WilsonArielleChristine MitchellCountry Joe McDonaldEMPGraham NashJoan JettKiss the SkyOrca Freedom ConcertSeattle Music Happenings
← Previous Story Snoop Dogg celebrates 420 at WaMu Theater (Photo Slideshow)
Next Story → Record Store Day 2014: it was amazing (in my imagination)