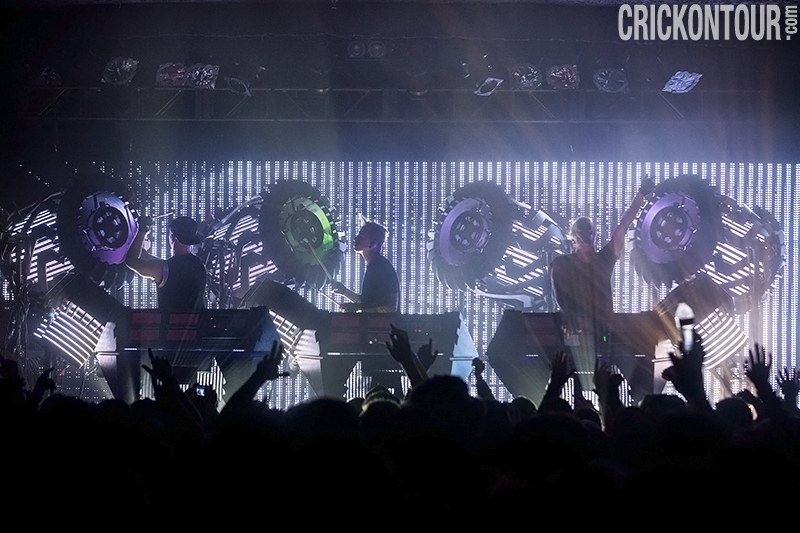 By David Mooney
Photos by Alex Crick
Four years ago, The Glitch Mob emerged from L.A. with a complex electronic sound and a reputation for showmanship. They toured the country, graced magazine covers, and released their first, and until recently, only album, Drink the Sea. Then, they just kind of disappeared for a while. They still released things here and there, including a popular remix of “Seven Nation Army;” and they still performed, but didn’t release another album until now. With Love Death Immortality, the trio have re-appeared on the EDM radar.

I showed up at the venue just as the first openers, Penthouse Penthouse, were starting their set. These guys were clearly having fun on stage, but not everybody in the audience could say the same. Every song was different – an R&B-style crooner was followed by something with a fast house beat, and then rounded out with a guitar-driven anthem. Some artists can get away with this kind of diversity, but Penthouse Penthouse isn’t quite there yet. These two definitely have the talent, but it looks like they still haven’t found the sound that works for them. A standout song was the chilled-out “Heist,” which they played near the end of their set and transitioned perfectly to the next opener.

Ana Sia, another L.A. DJ, took the stage immediately afterwards to a pretty apathetic crowd. Working with just a set of turntables, she spent the first five minutes sounding like Grimes before grabbing the attention of the entire room with some crazy drops. The surprised “woahs” from the crowd were almost audible over the bass – she had captured the room and did not let go until the end of her set, which got deeper and darker as time went on. I ran into a friend at the bar near the end of her performance, and we spent a few minutes yelling into each other’s ears about how much she reminded us of newer trap artists. Ana Sia cultivated the primal energy necessary for the Mob’s set perfectly – for the next twenty minutes, the crowd chanted “Glitch Mob!” and had fits of frenzied clapping when they saw technician’s flashlights behind the canvas hiding the stage setup.

If you’re not familiar with The Glitch Mob, they sound a lot like the music from that scene in Matrix Reloaded where humanity has a giant underground festival-rave-orgy because the robots are coming to kill everyone. And it’s fitting, because they have the kind of drops that make everybody in the room – especially the kids absolutely rolling face up front, and there were quite a few – convinced that they are witnessing the apocalypse. That’s good, because as with any EDM show, the elephant in the room is that there aren’t actually any instruments, and the whole set could plausibly be pre-recorded. The measure of an artist like this isn’t how great they play their buttons, but how well they manage the crowd, from their showmanship to their stage display.

The stage setup that the Mob brought along is one of the best I’ve seen at the Showbox. A giant LED screen covered the entire back of the stage, displaying anything from pulsing colors to footage from old concerts, while the three members of the group played a variety of buttons, knobs, and sequencers. Some of it was tilted towards the audience, so we could see what they were doing. But what brought it over the top were the eight giant futuristic drums that the band made great use of throughout the night – they were the size of oil drums and were similar to how I imagine a robot-designed bongo drum might look. The best part was that they were also covered in LEDs that could either sync with the backdrop, or light up when hit – a visual effect I’d never seen before. They clearly knew what an EDM crowd expects, and catered to it well.

The performance itself delivered on the hype the Mob has built. Opening with a mix from their debut album, the three were the epitome of performers, keeping their heads – and giant robot drums – banging for the rest of the evening. Three songs in, they treated the audience to their remix of “Derezzed,” a Daft Punk song you might recognize from the latest Tron movie. As the night progressed, they started incorporating songs from their newest album, starting with the opening track, “Mind of a Beast.” The difference was apparent. If Drink the Sea was a brooding explosion of intense emotionality, L/D/I is a shameless exhibition of how the Mob can take every sound currently floating around in EDM – brostep, trap, chillwave, whatever – and do it better than anyone else. Whether or not this is true is irrelevant, because the crowd certainly seemed OK with it. Somewhere in the middle they weaved in a tribute to West Coast rap, with snippets of Tupac and Dre lyrics hidden inside ruthless re-imaginings of their own beats.

Their three-song encore ended with “Skullclub,” the driven centerpiece of L/D/I. The L.E.D. backdrop displayed the lyrics, “we are the wild ones,” and the crowd took it to heart. The floor was bouncing as much as my knees. Somewhere near the end, the backdrop lit up in stunning purple and gold. I wouldn’t doubt if this was a nod to the UW students in the audience, that’s how well the Mob seemed to know their audience.

The evening got off to a slow start, but started picking up pace with Ana Sia and didn’t ease up until the end. It easily ranks among the best EDM shows I’ve seen in Seattle. 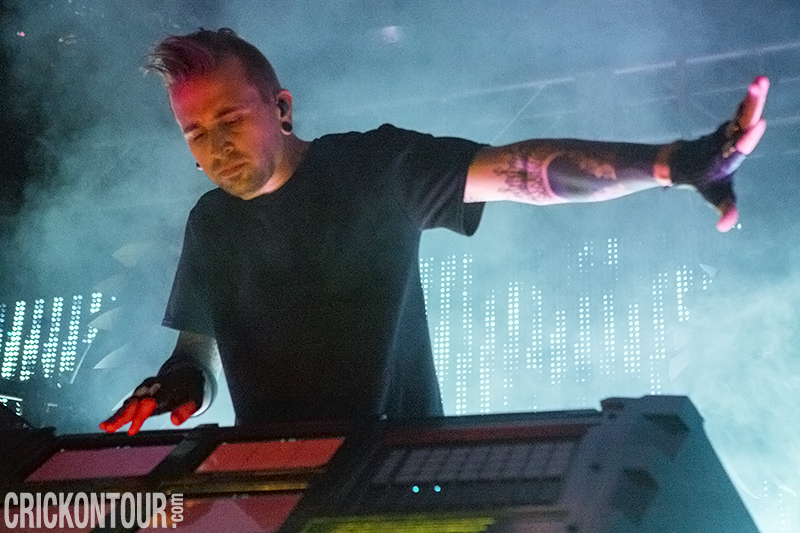 Arlene Brown is both a writer and photographer for SMI. She likes to take things one picture at a time. Covering and reviewing shows from Soundgarden, The Proclaimers, Lorde, The Head & The Heart, to Hank3, Bob Log III, New Politics, Black Joe Lewis, Grouplove, including local and national rising bands and more, she truly loves to try to get that perfect shot. Looking for that raw emotion, energy, power that only live music can deliver, she captures the essence of a show in her own unique style.
Related ItemsAlex CrickDavid MooneyGlitch MobPenthouse PenthouseSeattle Music HappeningsShowbox
← Previous Story Lights Out at The Paramount! (Photo Slideshow)
Next Story → Out on the Streets: Record Release at the Sunset (Photo Slideshow)