Synergia Northwest ‘Get Back’ to Celebrate Beatles 50 Year Anniversary 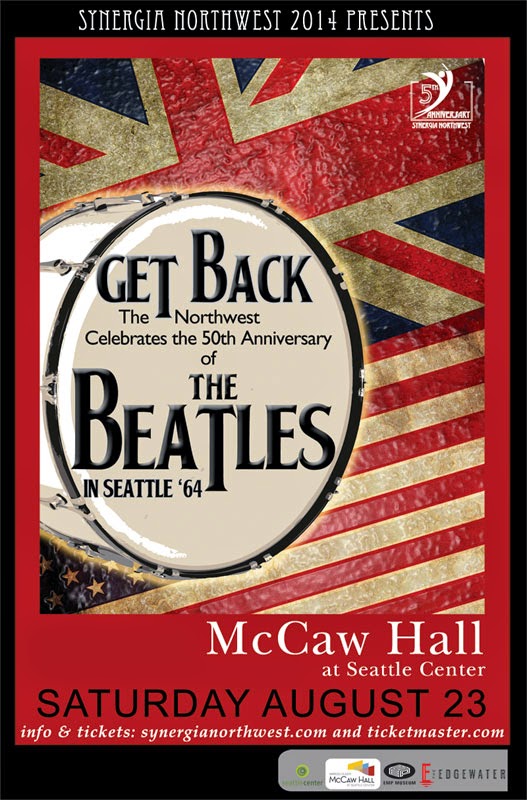 Synergia Northwest is back celebrating five years, and like past events will bring something very special to Northwest music lovers by presenting an epic event, celebrating the 50 year anniversary of the legendary lads from Liverpool, The Beatles!

This onetime historic tribute will feature an all-star cast of emerging and iconic northwest musicians spanning generations and genres. Pacific Northwest musicians will pay homage to a band that ushered in a musical revolution. The Beatles continue to inspire and influence music fans decades since they landed on United States shores 50 years ago.

Several prominent artists will perform the original set The Beatles performed at the 1964 Seattle Coliseum concert which will include Beatles classics like “She Loves You” and “I Want to Hold Your Hand”, followed by Sgt Pepper’s Lonely Hearts Club Band, performed in its entirety with special musical guests paying tribute to the iconic album. The Sgt. Pepper’s performance will be backed by the brilliant, 50 piece Synergia Northwest Orchestra.

Tickets can be purchased starting Monday, June 2 at 10:00 a.m. at the Box Office (located on the west plaza of KeyArena, Ticketmaster outlets, Ticketmaster.com, or charge by phone toll free at (800) 745-3000. All tickets subject to applicable service charges and fees. A limited amount of special VIP seats are available that include a pre-show meet-and-greet.

MAY 29, 2014 SEATTLE, WA – On Saturday, August 23, 2014, The Pacific Northwest will mark the historic 50th anniversary of The Beatles’ 1964 Seattle performance in a big way. The milestone will be celebrated at the Seattle Center in McCaw Hall, 50 years after the Fab Four embedded themselves into the Northwest’s musical culture and Beatlemania swept the nation.

“Get Back” will be hosted by iconic disc jockey Pat O’Day, who introduced The Beatles on stage at the Seattle Center Coliseum’s first ever concert – 50 years ago – on August 21, 1964 and special guest Marco Collins, the influential northwest DJ credited with breaking bands like Nirvana and Pearl Jam. Both disc jockeys are in the Rock and Roll Hall of Fame.

In addition, a very special Northwest premier of Sir Paul McCartney‘s classical composition, “Celebration” from his second full-length release of original classical music, Standing Stone, will be performed by the Synergia Northwest Orchestra.

Two epic events occurred on the same night. The Beatles made Seattle a stop on their first tour of the US. The excitement cannot be adequately described with words; you simply had to be there. Tiny amps, a tiny little Coliseum house speaker system with screaming surpassing the 12th-Man Seahawks crowd. But, you got to see them, the immortal Beatles! It was a double thrill for me to be the emcee that night. These two events were to herald the concert business as we know it today. Frankly, that Seattle night opened our eyes to what would become Concerts West, our Seattle based firm that went on to become the largest concert company in the world. All thanks to The Beatles . . . And a thrill it is to join hearts, in treasured McCaw Hall, named for Marian McCaw, mother of communication giants Craig and Bruce McCaw, who were just kids when they attended that great Beatles visit to Seattle. 50 fabulous years ago!

This will surely be a big moment in Northwest music history. As a musician and Northwest native, there is no greater honor. Producing this significant Northwest event honoring The Beatles while working alongside the people who brought The Beatles to Seattle in 1964 is a watershed moment.

-Producer and “Get Back” Music Director Michael McMorrow.

Proceeds from “Get Back” celebrating the 50th anniversary of The Beatles in Seattle will benefit Pacific Northwest youth music organizations for the cause of preserving and safeguarding the Northwest’s rich musical legacy. Once again, The Melodic Caring Project, an organization that combines music and technology to stream live concerts to hospitalized kids and teens will be streaming the concert to hospitalized children.

“In August of 1964, Seattle embraced Beatlemania with the first major rock concert at Seattle Center Coliseum (now KeyArena), which kicked off a 50-year music legacy in that facility and on our campus that is thriving today,” stated Seattle Center Director Robert Nellams. “We are honored to host such an innovative event at McCaw Hall this summer celebrating the inspirational legacy of The Beatles that marked the beginning of a rich rock n’ roll history at Seattle Center.

Synergia Northwest – celebrating its 5th anniversary- blends classical, contemporary, professional and student musicians into one evening of performances that unifies cultures and musical genres. The caliber of these artists, along with a world-class conductor and orchestra has produced evenings of unforgettable musical moments that have left audiences knowing they’ve just experienced a magical event.

Legendary Northwest artists who have already performed with the Synergia Northwest Orchestra include Pearl Jam’s Mike McCready and Stone Gossard, Alice in Chains’ guitarist Jerry Cantrell, Alan White of Yes, John Popper and Brendan Hill of Blues Traveler, Guns and Roses’ Duff McKagan, Tracy Bonham and many others. The experience of performing with the orchestra has received heartfelt reviews by the artists who have performed and many offers of returning again.

An “All You Need is Love” YouTube video submission contest will award five lucky winners a four-pack of VIP tickets to the concert that includes seats with in the first eight rows, a special pre-show meet and greet and possible use of their videos featured as part of the show. Contestants must record their creative singing videos to the studio version of “All You Need is Love” from The Beatles Magical Mystery Tour, upload them to YouTube before August 8, 2014 and send a link to lovethebeatles@synergianorthwest.com.

The first Synergia Northwest concert launched in 2010 at Tacoma’s historic Temple Theatre Ballroom in the Landmark Convention Center. And in 2011 made its Seattle debut at The Moore Theater featuring such artists as Alan White, Queensryche, Heart By Heart, Special guest appearances by Geoffrey Castle, Blues Traveler’s John Popper and Brendan Hill and many others all alongside the 50 piece Synergia Northwest Orchestra. In 2012 the event was held at the iconic Paramount Theatre.

Synergia Northwest is the brainchild of Michael McMorrow, who is a composer, and recording artist as well as producer for some of Washington State’s most prestigious and beneficial music events. He, along with Brendan Hill of the Grammy-award winning rock band Blues Traveler, is also a founding member of the nationally recognized rock band Stolen Ogre. As executive producer and musical director Michael is currently producing Music Matters “LIVE”, a concert event to raise funds and awareness for youth music in the Pacific Northwest, Spring 2012. In addition to developing the youth music oriented Synergia Northwest, McMorrow was recently appointed to act as Musical Director for Broadway Choreographer Joey McKneely from West Side Story for STG’S 13th Annual “DANCE This”. McKneely studied under Jerome Robbins and reproduced and rejuvenated the choreography for the Tony Award Winning Broadway revival that opened in 2009 as well as directed several major productions of West Side Story around the world. McMorrow continues to write, record and perform with various projects while currently working on his new music project “Idlewood”. Michael is a member of the Recording Academy of Arts and Sciences, a voting member of the Grammys and is an advisory board member of Music Aid Northwest.

Not only is he a multi-media journalist, he is also an accomplished musician. He is the founder of SMI and drives the creative look, feel and branding for the publication. His years of writing, arranging, and performing live music in a variety of genres inform his ability to communicate the message and the mechanics of music. Roth’s work on SMI reflects his philosophy that music is the universal language, and builds community. He believes it has the power to unite people of every race, religion, gender, and persuasion.
Related ItemsMarco CollinsMcCaw HallMelodic Caring ProjectMichael McMorrowPat O'DaySeattle Music HappeningsSgt. Peppers Lonely Hearts Club BandSynergia NorthwestThe Beatles
← Previous Story The Everett Fisherman’s Village Festival: A look back (Photo Slideshow)
Next Story → Ayron Jones, Naomi Wachira and Whitney Monge team up for charity (Video)