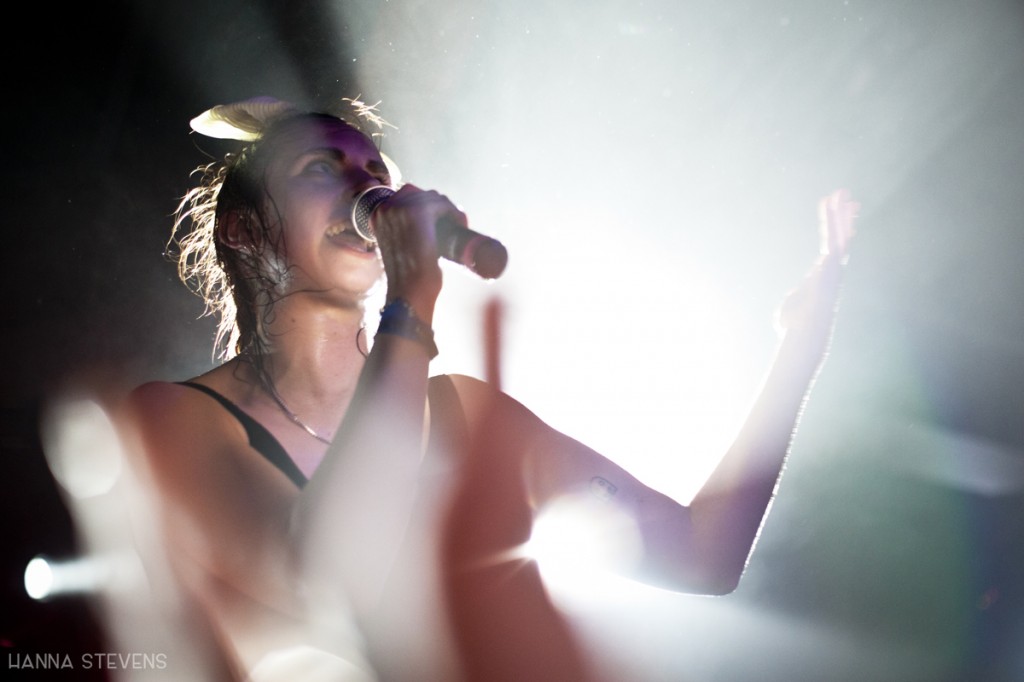 Karen Marie Ørsted wanted to be a musician since she received the debut album from the Spice Girls when she turned 8. Now, at 25, the Danish artist fronts electro-pop project MØ and challenges modern media rules of age and beauty with a record, tour, and fiery live show channeling the passion, confusion, and imperfection of youth. Oh, and here she is to coach you on the pronunciation of MØ.

Before her sold-out show at The Crocodile Cafe on Friday, Ørsted talked with SMI about finding her voice in MØ, the open-ended quest of youth, and that pivotal Spice Girls record.

“I got it as a birthday present. Along with it I got my first ghetto blaster ever to play it on. I got it from my mom and dad. I knew the music before I got the record,” Ørsted said.

Her interests expanded to include punk and hip-hop. She and Josefine Struckmann toured as activist electro-punk band MOR, managed by Bjørn Nielsen, who also managed Ronni Vindahl (No Wav.).

“When my manager started working with me back in 2009 I was doing this crunk rap, very inspired by Peaches, very trashy and very much about swearing. I was all about attitude, alter ego, protecting my center, which was funny. It was cool,” Ørsted said. “But then I started to open up and take down some of the layers.”

She wrote “Maiden” in its Night Version stages (mostly her vocals and piano self-recorded at her parents’ house). Vindahl heard the song and started producing around it.

In 2012, Ørsted was in New York on an internship for JD Samson when she learned that MØ would perform at Denmark’s Spot Festival. She and Vindahl wrote and released “Pilgrim,” MØ’s first official single.

“That was the first time I felt that a producer really understood my voice, my vision. He brought it to life,” Ørsted said.

The electro-pop duo, which becomes a quartet for lives shows, has gained a strong international following, selling out their 12-date headlining tour in North America with Sweden’s Erik Hassle opening several of the shows. MØ is touring behind the March 2014 debut released by Chess Club Records and RCA Victor. No Mythologies to Follow is a record about the struggles, searching, love, and confusion within the experience of today’s youth who, without traditions and lore to follow, are somewhat of a lost generation.

“Now it’s more become like the media and the social media preach about the perfect life . . . and about how you should strive to have everything at once. It has just very much become a “me, me, me, me, me” generation . . . sharing all this useless information about your life and how great you feel and how good everything is. We are glorifying eternal beauty and eternal youth,” Ørsted said.

However, MØ is the antithesis of idolized plastic pop. While Vindahl’s textural production and Ørsted’s anthemic, layered vocals do create a party-pop vibe, musical maturity and lyrical intention translate raw honesty and the multi-dimensionality and imperfection of varied human experiences. Youth is not an age – youth is a quest and a battle.

“Even if you’re not young anymore, we will always be searching for something. We live in a society [that is] so much about pushing others down to get forward yourself, and it’s so damn hard. It’s about trying to find your own way,” Ørsted said.

And while some artists fear aging or rely on temporaneous beauty and fame, MØ is built on authenticity, which is timeless.

“Since I was a little kid music has always been my way of gaining self esteem. I was this tomboy. I was actually kind of popular, but I was a geek. The boys were like, ‘Yeah, we don’t want to kiss you.’ But through making music and expressing myself and finding something I thought I was good at, that gave me self-esteem. It can be hard of course sometimes to accept that I’m not perfect, and sometimes I look stupid when I perform live because I just want to let go. You just have to let go and just be yourself. A lot of great artists have . . . created this cool profile, and I guess it has come from something truthful within them. But I think for me, I can’t do that and I don’t want that. If I [were] to create this fake persona, then the masquerade would break and that would be a disaster. My mom actually always told me that as long as you’re being yourself you can’t really go wrong. Just admit your faults. It’s not that dangerous,” Ørsted said.

Video footage also played throughout the show, which Ørsted often concepts and directs. From self-recording her vocals and even mixing the Night Versions (four pre-production vocal and piano bonus tracks including “Dust Is Gone”) to collaging various artworks like her Bikini Daze EP cover, Ørsted’s hands are all over MØ.

“Music is, and probably forever will still be, my medium, my way of expressing myself. But I also love making collages and writing, also drawing and stuff like that. When you create music or art or whatever it’s a universe . . . and you want that to be truthful all the way,” Ørsted said. “It’s so important that the visual matches your personality and your music and your feelings and everything else.”

Her aesthetic is balanced, but in no way static.

“I just really like the combination of something fragile, something that’s like vulnerable and shaky, but then also something that has some energy and some aggression. I love this combination because you can easily be this very tough, ‘I’m so bad-ass’ girl, but if you don’t have the vulnerable and sensitive sides to it, it just gets boring. I think it’s just important that you have all these perspectives, or again, that you just admit that, ‘Okay, I have more sides to my persona than only this one or two.’ I want to combine that in my music and in my art,” Ørsted said.

“He also combines something trashy and aggressive into a very sensible and very well-done universe,” Ørsted said. While she was dancing in the crowd, Vindahl carried the stage energy on his guitar.

Although No Mythologies to Follow is indeed centered around the experience of youth, Ørsted has not boxed MØ into a project that will quickly die with time, especially considering her firecracker performance.

“The album doesn’t have a conclusion. It ends with the fact that, ‘Why do everyone have to grow old?’ I just realized from watching myself and my friends and everybody around me that even though we’re not in our teens anymore, we are still searching and we’re still insecure and we’re still looking for truth and answers. I guess it will be like that all your life,” she said. “There will always be something that’s not right, something you’re in doubt about, and something you want to figure out; new paths to discovery. Stop learning, stop living.” 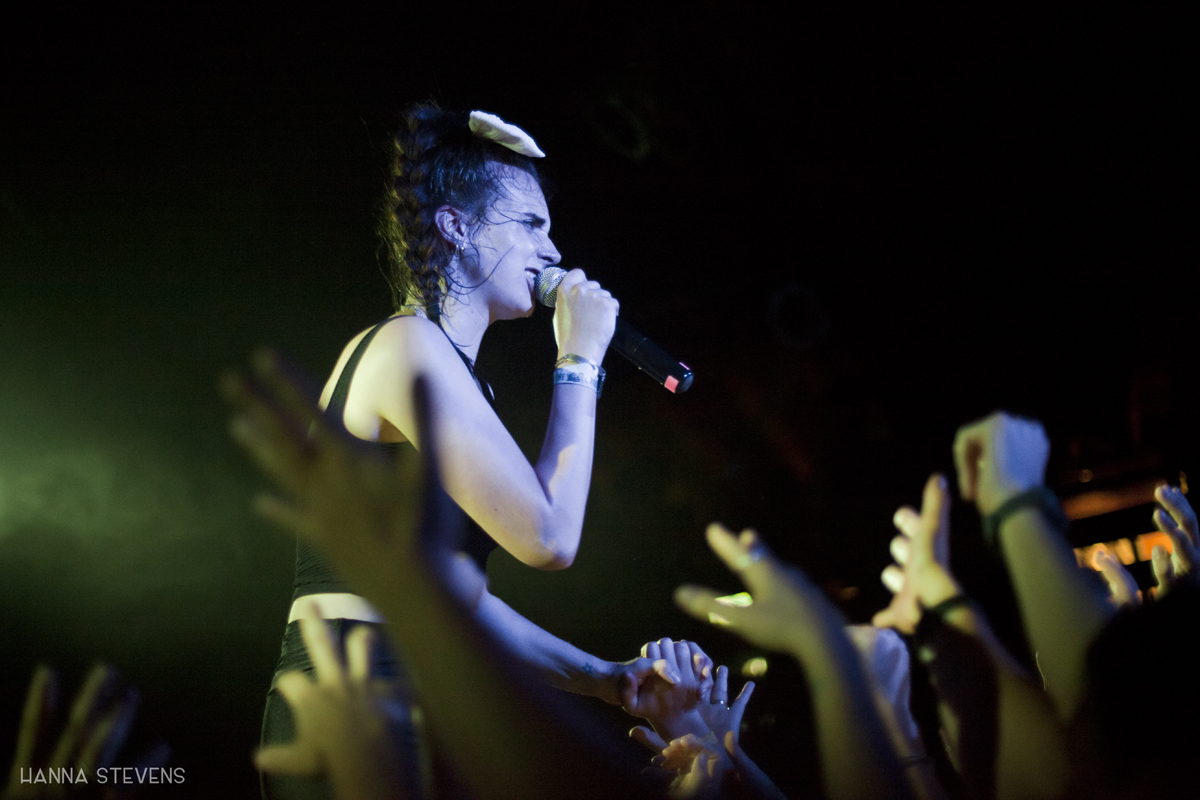 Hanna Stevens is a musician and photographer from Indianola, WA who now lives, works, and plays in Seattle. Music and photography create the framework for Hanna’s life. Her intention is to create community through music and art, and she is thankful for the chance to do so for SMI.
Related ItemsSeattle Music Happenings
← Previous Story Lennon’s GOASTT – May 22nd – The Crocodile
Next Story → GRCC’s Spring Concert featuring: Mat Kearney, Naomi Wachira, Carson and Tess Henley (Photo Slideshow)