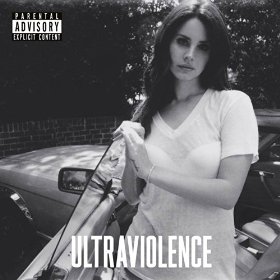 Lana Del Rey wants the world to know how sad and miserable she is. It’s evident on her sad and miserable downer of a new album, Ultraviolence, (Interscope) that she has little confidence in her voice, trying hard to bury it amongst the noise. Her voice is weak and literally every song has Del Rey stacking her own vocals on top of each other three, four, five layers deep. This creates an echo effect that makes them sound hazy and frequently indistinguishable. It also lends to the suspicion her vocals are not great live.

The songwriting is decent with most of the tracks presenting a retro sixties style along with Del Rey’s typical subjects; sex, drugs, violence and the world against me or me against the world mentality. Seeing as how the first track is titled “Cruel World,” my educated guess would be the former. It’s a slow burn opener to a mostly slow burn album. Another Del Rey tale about a screwed relationship.

The title track starts out with piano and strings before the psychedelic blues guitar of Dan Auerbach kicks in. He produced the album. “Shades of Cool” is a sixties Bond style number. “Brooklyn Baby” leans towards the Brill Building style. Del Rey’s boyfriend provides vocals on the track as well. The layered vocals damage the quality of the song. “West Coast” is another track diminished for the same reason. Did Del Rey mean to nearly sabotage these songs with her vocals? If you listen closely there are a few instances where she even misses a note or is off pitch.

The rest of the album basically replicates the themes and sounds of the first half. “Pretty When You Cry,” the track currently receiving the most radio airplay, is an atmospheric haze of a lament. “Money Power Glory” almost sounds like a prayer before Del Rey sets out to gain these at any cost. “Old Money” does show potential, a piano ballad in which Del Rey uses, at times, a single vocal track. The cleverly named “Fucked my Way to the Top” must be autobiographical because Del Rey certainly didn’t do it with her voice.

Much of the album would sound better if they just scrapped many of the vocal layers. After listening to this I feel like I should crawl in a hole and hide from the world but I have a better idea. I’ll put this album in that hole because I think that’s where Lana Del Rey wants to be right now.

Not only is he a multi-media journalist, he is also an accomplished musician. He is the founder of SMI and drives the creative look, feel and branding for the publication. His years of writing, arranging, and performing live music in a variety of genres inform his ability to communicate the message and the mechanics of music. Roth’s work on SMI reflects his philosophy that music is the universal language, and builds community. He believes it has the power to unite people of every race, religion, gender, and persuasion.
Related ItemsChris SennDan AuerbachInterscopeLana Del ReyUltraviolence
← Previous Story Veruca Salt at the Tractor Tavern
Next Story → Devo’s Retro-Specto at the Neptune – June 25, 2014