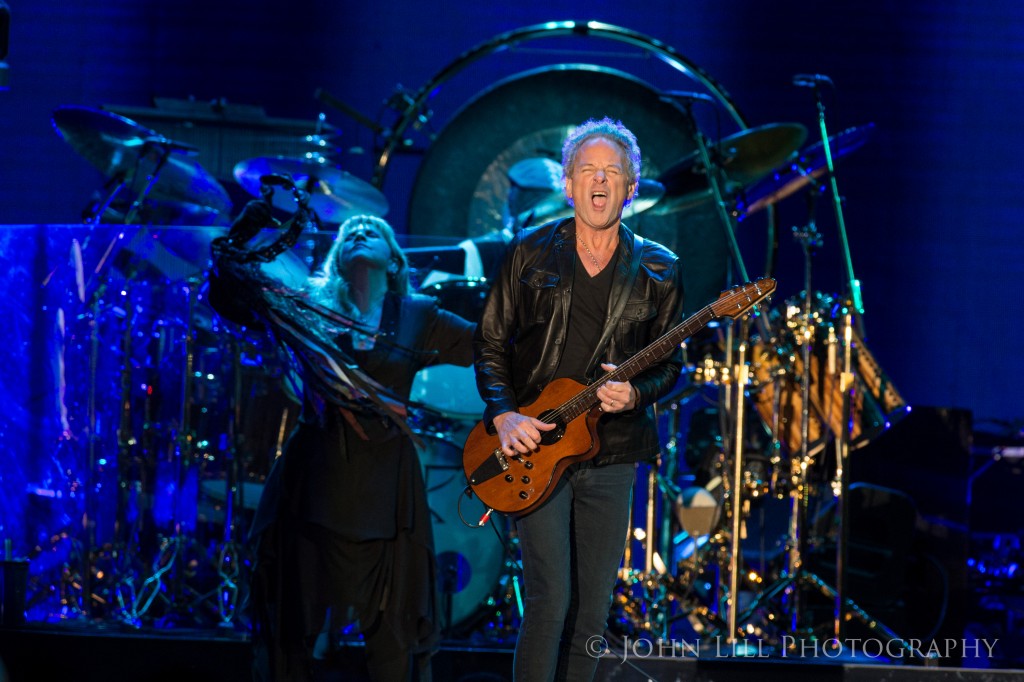 It was interesting that Mick Fleetwood waited until the completion of Fleetwood Mac’s brilliant, Tacoma Dome performance to proclaim, “The Mac was back!” It was as if Fleetwood was spiking a metaphorical football in the end zone after scoring a game winning touchdown. He let the legendary group’s music and highly energized performance do the talking first.

Longtime fans know that the band was formed in 1967 by Peter Green and the group’s lone original member Mick Fleetwood, later to be joined by then husband and wife, John and Christine McVie. But it wasn’t until when the singer and songwriting duo of Lindsey Buckingham and Stevie Nicks joined that group that Fleetwood Mac went from just the critics darlings, to critic darlings and mega-hit makers.

On with the Show…

The house lights went down and the subtle sound of Mick Fleetwood’s chimes came up through the speakers and the band launched into the hauntingly romantic and angst ridden, “The Chain.” Juxtaposed by the band’s second number “You Make Loving Fun” sung by their prodigal sister, Christine McVie, who rejoined the group as a full time member for the first time in 16 plus years. After that, the endless stream of hits just kept on coming one after another and continued into the night.

With the classic lineup fully intact, Fleetwood Mac was in vintage form. Stevie Nicks one of a kind vocal delivery coupled with Buckingham’s heart felt free-fingered guitar styling, brought greater energy and intensity to the bands overall sound. Of course McVie and Fleetwood, (who may be one of rock’s best rhythm sections –  in the same class as the likes of Cream’s Ginger Baker / Jack Bruce  and Led Zeppelins’ John Bonham / John Paul Jones), provided a solid foundation for the band who was augmented by an additional guitarist, keyboardist, percussionist and three person vocal section.

Stevie Nicks, donned her trademark black flowing dress and glided effortlessly across the stage in charming and bewitching fashion and shined on Fleetwood Mac staples, “Dreams,” “Rhiannon” and “Gold Dust Woman.” Buckingham poured every ounce of his soul into each solo (using his custom made, Turner Model 1 guitar), like a man possessed on songs like “I Know I’m Not Wrong,” “Big Love” and “Go Your Own Way.”

One of the shows highlights was a rousing version of the title track from Fleetwood Mac’s eclectic follow up to the 45 million selling blockbuster, Rumours…Tusk. Fleetwood’s tribal style drumming was on full display while vintage video and sound footage of the USC Trojan Marching Band horns blasted in the background as the song reached its powerful crescendo.

The Tacoma crowd was treated to a sample platter of hits throughout the set with pop-rock gems like, “Gypsy” from Mirage and “Little Lies,” and “Seven Wonders” from the 1987 release, Tango In The Night, but Fleetwood Mac favored selections from their self-titled 1975 release and Rumours (The complete setlist is below).

Fleetwood Mac is an outfit whose history is notorious and synonymous with the 70’s, the era in which they became a Rock n’ Roll Juggernaut. The behind the scenes soap opera of love triangles and drug use are stuff of legend but behind the music never overshadowed the music itself. Fleetwood Mac has always been about well written, accessable songs, strong arrangements, finely crafted records and impeccable chops.

The group has always been the type of band where the whole is greater than the sum of their parts and that is saying a lot because individually, each member has created incredible music of their own as solo artists. However, it is the classic lineup of Mick Fleetwood, John McVie, Christine McVie, Lindsey Buckingham and incomparable Stevie Nicks that created a solid body of work that has transcended decades and generations and will continue to do so in the future.

When McVie opted out of the band and music industry several years ago Fleetwood Mac trudged on, but it was obvious that an integral piece was missing and it was felt. Songs like “You Make Loving Fun” “Over My Head,” “Don’t Stop” “Little Lies” and “Everywhere” were relegated to the concert sidelines for several years.

Seeing and hearing Christine McVie on stage with her mates after a multi-year hiatus was truly a gift. Her presence brought a special sentimentality and pop to a fantastic concert which took longtime Mac fans on a romantic journey down musical memory lane.

With McVie back in the fold for a full-fledged tour, all the pieces were finally in place for an authentic reunion. The band relished every note, every chorus and every ovation from an animated and adoring audience.

Fleetwood Mac’s “On With The Show Tour” was not just a nostalgia trip. “The Mac” were not just content to just deliver a greatest hits package to placate long-time or newer fans that have not seen them perform the classics.  Moreover, this was not a band was trying to prove itself as much as they were simply celebrating (in a powerful way) their 40+ year body of work they created together –  made even more poignant, given the wars they went through collectively and individually. It was fun to see the playful interaction between Buckingham, Nicks and McVie on stage during and in between numbers. Their childlike joy was infectious. Who knew that Lindsey Buckingham could be so funny?

After performing “Go Your Own Way” at the end of the set, Fleetwood Mac came back out to give the Tacoma crowd a helping of more hits like “World Turning,” the Bill and Hillary Clinton inauguration theme song “Don’t Stop” and the exquisite “Silver Springs” The band exited the stage, save McVie –  who sat behind her piano and ended the night with a lovely and beautiful rendition of “Songbird” …A perfect musical end to a wonderful performance and triumphant return of one of the best outfits in folk, rock and pop history.

After the “Songbird,” the band’s founding father and heartbeat, Mick Fleetwood came back out to center stage to graciously thank the fans for years of support and imploring them to “take care of each other.”

“The Mac” was back indeed… 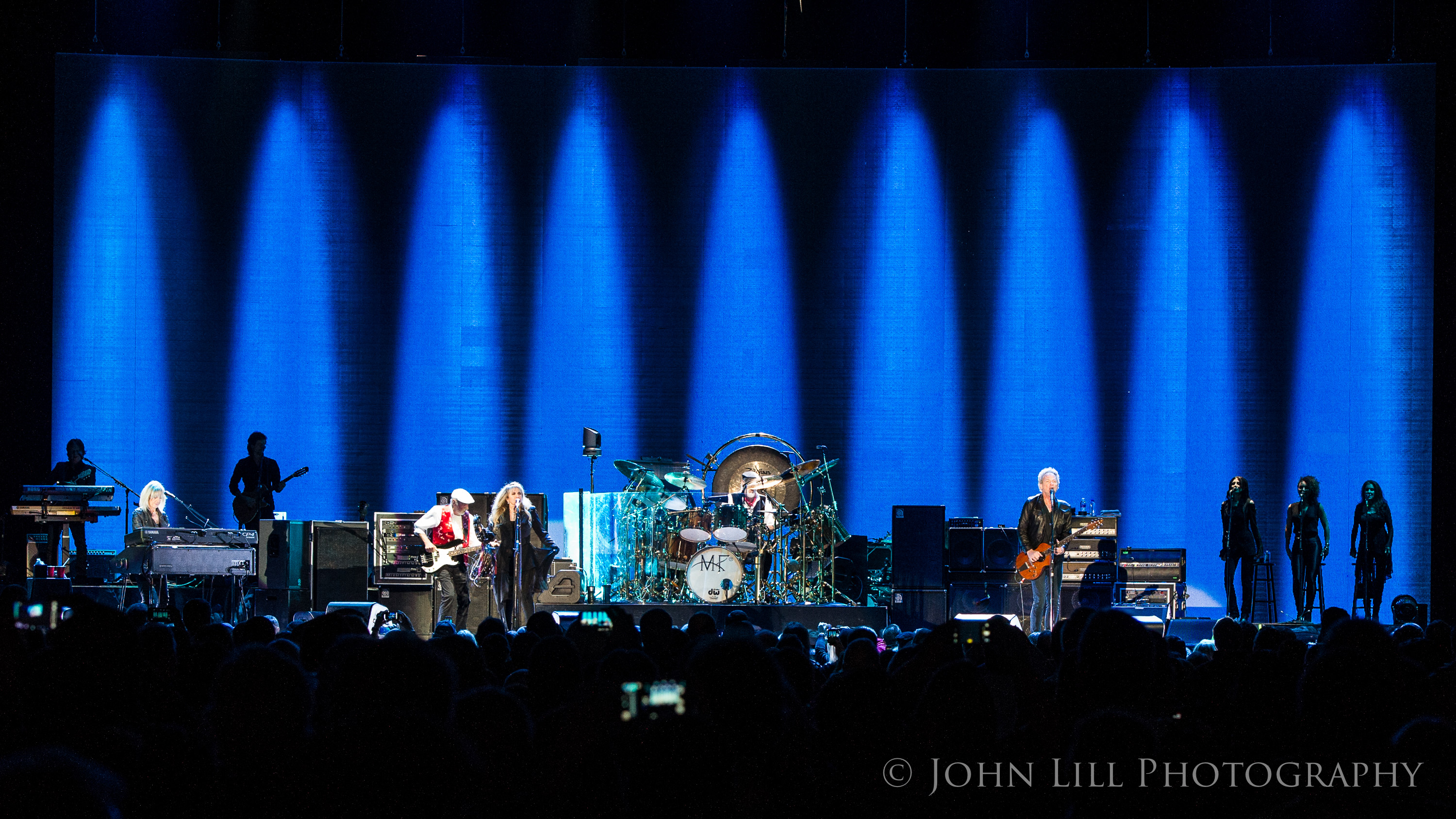 Not only is he a multi-media journalist, he is also an accomplished musician. He is the founder of SMI and drives the creative look, feel and branding for the publication. His years of writing, arranging, and performing live music in a variety of genres inform his ability to communicate the message and the mechanics of music. Roth’s work on SMI reflects his philosophy that music is the universal language, and builds community. He believes it has the power to unite people of every race, religion, gender, and persuasion.
Related ItemsChristine McVieFleetwood MacGreg RothJohn LillJohn McVieLindsey BuckinghamMick FleetwoodSeattle Music HappeningsStevie NicksTacoma DomeTacoma Live Music
← Previous Story FKA Twigs Enchants at The Showbox
Next Story → The Black Keys Tear Up KeyArena (PHOTOS)