Patti Smith Brings Her Legend to The Moore

By Alicia Kamenick on January 21, 2015@corianderstem 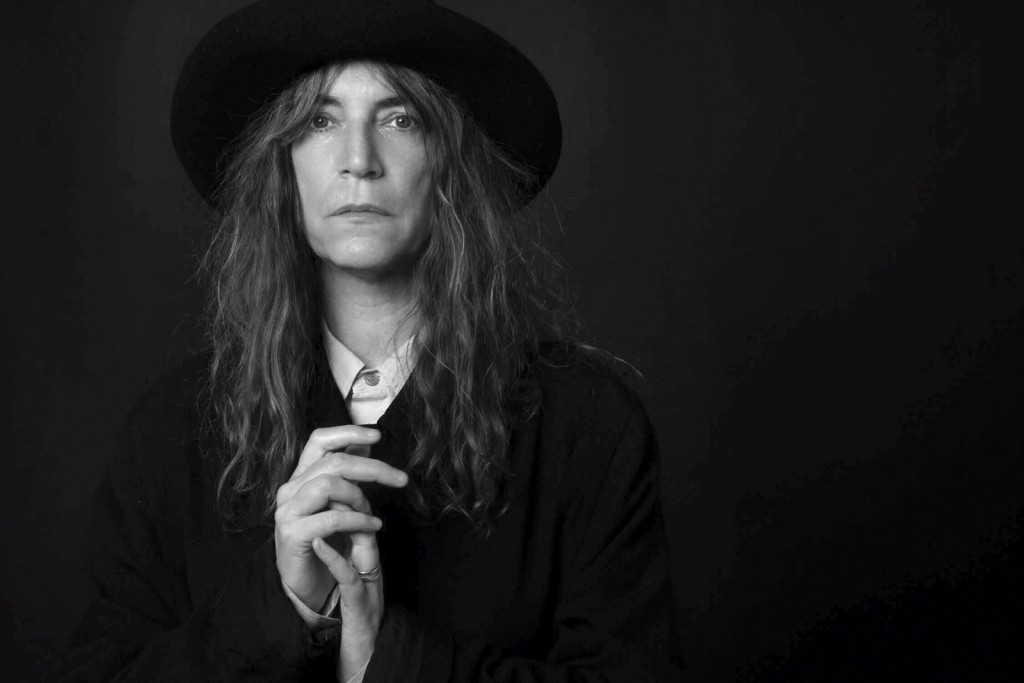 Considering the wide range of demographics at Patti Smith’s Monday night show at The Moore, it wasn’t a surprise that there were a few souls who really did not care to get up and rock out. Not only did one gentleman make known his displeasure of having his view blocked, but the unhappy want-to-dancer even yelled to Patti that people around them wouldn’t let them dance.

Patti’s response? “As long as you don’t hurt your brothers and sisters, you can do whatever the fuck you want.” And so went the rest of the show, with ushers having to clear the aisles of dancing, arm-thrusting fans rocking out with total glee and worshiping at the shrine of the High Priestess of Punk.

At 68, Smith has lost none of her commanding presence. She took the stage to a rapturous welcome and waved happily to all sections of the theater, before starting the show with “Dancing Barefoot.”

The two-hour show spanned her lengthy career, everything from her seminal 1975 debut Horses (“Redondo Beach”) to the title track of her most recent release, 2012’s Banga. A few covers were sprinkled throughout the show as well, including John Lennon’s “Beautiful Boy” and a stripped-down, intense version of Nirvana’s “Smells Like Teen Spirit,” dedicated to the Bread of Life Mission.

Long-time cohorts, guitarist Lenny Kaye and drummer Jay Dee Daugherty remain part of her band, along with bassist Tony Shanahan and Jack Petruzzelli. The singer left the stage to join the crowd to watch the band tear through a cover of Love’s “My Little Red Book,” with an addendum of the same band’s song “7 and 7 Is.”

Smith told tales throughout the show, starting with anecdotes about her younger days – when she was young, and taller and skinnier than anyone in her family, she thought she had been deposited on the planet by aliens, and waited for them to come back to retrieve her. She spoke of her courtship with Fred “Sonic” Smith in 1976, leading into “25th Floor,” how waiting for his weekly long-distance call had led her to add lyrics to Bruce Springsteen’s “Because the Night,” and of how becoming a grandmother had turned her hair completely gray.

As the show progressed, her stories turned into incantations, exhorting the crowd to chant, to embrace their freedom, to embrace the now, to continue to speak out, culminating in the encore with an electric “People Have the Power” and “Rock N Roll Nigger.”

Her iconic alto voice has retained all of its power over the years, and the band provided all the oomph needed to show that aging doesn’t mean losing the ability to rock the eff out and command an audience.

Alicia is a Midwest transplant who loves Seattle but misses thunderstorms. Her musical obsessions began when her coolest aunt gave her a copy of K-Tel’s Rock 80 album for Christmas when she was 7. She spent many years studying piano and voice, but the force of rock and roll won, so while she still sings in a local chorale, her true musical passions lie more with The Beatles than with Beethoven. When she’s not working at her job in HR, she can be found singing bad pop songs at the top of her lungs … although sometimes she does that
Related ItemsBruce SpringsteenJohn LennonPatti SmithPunkSeattle Music HappeningsThe Moore
← Previous Story Korby Lenker and The Banner Days SHINE at The Triple Door
Next Story → Timbrrr! 2015: brimming out of its britches