By Robin Fairbanks on March 31, 2015@robinfairbanks 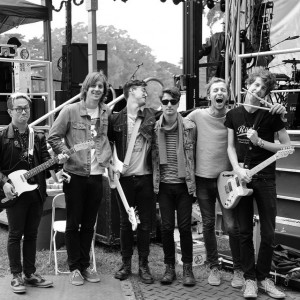 The Bay Boys are back! Yep, Finish Ticket is jetting in from their European tour with AWOLNATION straight to Seattle. We better have some coffee ready for these guys as they’ve been going non-stop across the pond. Thursday, you’ll see why Paste Magazine has named them “The Best of What’s Next in 2015.” Here’s a sneak peek of FT live at The Fillmore.

Headlining will be Saint Motel fresh off their appearance on Jimmy Kimmel Live on March 24.
Check out the live performance of “My Type.” an exuberant collision of gorgeous tropical horns and percussion, suave indie style and frontman A/J Jackson‘s velveteen croon.

This is an All-Ages Show  8pm. Admission $12, and SMI will be there to bring you a Post Show Wrap and slideshow!

Robin Fairbanks has spent 30+ years in the Music Industry in many capacities. Working in the Seattle music scene since 2006 as a Manager/Booker, she’s known for her ethics and artist development skills. Robin has guided the careers of many, but most notable as the former Manager of Seattle Garage/Blues band Fox and The Law for 3.5 years. Robin has spent the last 2 yrs consulting with Artists who seek her help as a Music Consultant and Publicist with Setlist Music Solutions LLC. She also gives of her time as an advisor to Seattle Wave Radio, an Internet music station where she helped shape its sound as the ROCK Channel Music Director for 2+ yrs upon its launch in 2010 and where you’ll find her music blog, “Bird On A Wire“. In 2014, Robin also worked as a Contributing Music Writer for Guerrilla Candy.
Related ItemsAWOLNATIONFinish TicketJimmy Kimmel LiveNewsRobin FairbanksSaint MotelSeattle Music HappeningsThe Crocodile Cafe
← Previous Story Shark The Herald celebrate album release at The Cannery
Next Story → Why The Sonics are iconic